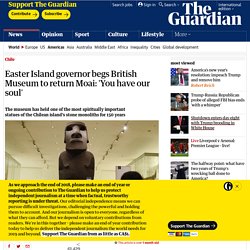 The museum has held the Hoa Hakananai’a – one of the most spiritually important of the Chilean island’s stone monoliths – for 150 years. “My grandma, who passed away at almost 90 years, she never got the chance to see her ancestor,” said governor Tarita Alarcón Rapu after meeting officials from the British Museum, accompanied by Felipe Ward, Chile’s national assets minister. “I am almost half a century alive and this is my first time,” she added. Cover Story: The comic book that changed the world. I first heard about the civil rights-era comic book Martin Luther King and the Montgomery Story from Congressman John Lewis in the spring of 2008. 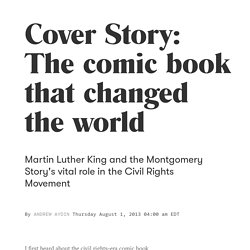 I had been working for him less than a year when I was driving him to an event and we got to talking about comic books. I remember Lewis sitting in the front passenger seat as he gently teased me about attending Atlanta's comic convention Dragon Con. But then he said, "You know, there was a comic book during the movement. It was very influential. " I was captivated. As I came to learn, the story of Martin Luther King and the Montgomery Story is tightly tied to the Civil Rights Movement's early days. 9 Afrofuturist Books to Enjoy if You’re Homesick for Wakanda. Beyonce's Grammy Performance Was a Gilded Afrofuturist Dream. Beyoncé Giselle Knowles Carter gave us a transcendent performance of "Love Drought" and "Sandcastles" at the Grammys this past weekend, her stage a last supper table in the midst of a garden, her dancers disciples, her pregnant belly the star of the night sky.

To me, Beyoncé is an invitation for black people to see our miraculous nature in this moment when black lives in particular, and all that lives on our planet, are in a precarious position due to the theater of racism, fascism and patriarchy spreading across the globe. She embodies our continuation, the black bodies that birth us.

Beyoncé picked up on, and in many ways deified, elements she introduced in her visual album Lemonade, for which no awards shows have appropriate categories. Before there were RiRi Williams and Black Panther, there was Lion Man. Comic books have always been a few steps ahead of other popular forms of media when it comes to inclusion and diverse characters. 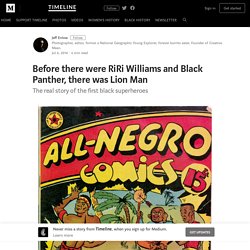 Miles Morales’ turn at being Spider-Man has been immensely popular, and 2014’s Ms. Marvel volume starring a young Muslim girl named Kamala Khanof won the Hugo Award for best graphic story in 2015. The most recent attempt to diversify the super hero ranks comes with Marvel’s announcement that Iron Man would be taken over by young genius from MIT Riri Williams. It has taken comic books a long time to get to this point, and they definitely have a long way to go, but Riri does mark a milestone in comic book history. ‘Black Panther’ Is Not the Movie We Deserve. Black Panther, a movie unique for its black star power, depends on a shocking devaluation of black American men. 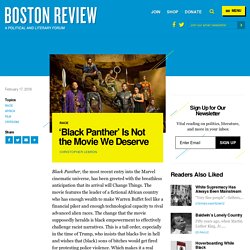 The Key Reporter - Walter Greason Reflects on Afrofuturism in the Wake of Black Panther. By Benjamin Purper Two months after audiences were transported to the fictional African nation of Wakanda, the hit superhero movie Black Panther continues to break records. 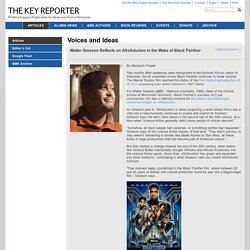 The Marvel Studios film reached the status of the third highest-grossing film of all time, surpassing even James Cameron’s 1997 Titanic. For Walter Greason (ΦBK, Villanova University, 1995), Dean of the Honors School at Monmouth University, Black Panther’s success isn’t just commercial—it’s also a defining moment for the artistic and intellectual movement known as Afrofuturism. Black Panther's Sister Shuri Is Getting Her Own Comic Book Series & It's Happening So, So Soon. #New on @BlkPerspectives: #Black #History, Sequential #Art, and the #Power of Representation - John Craig (@TempleUniv) #BlackPanther #Comics #Art…

BBC News - Afrofuturism: Why black science fiction 'can't be ignored' How to build Wakanda: Lessons for African leaders from 'Black Panther' With the World Bank's Global Economic Prospects reporting that three of the ten fastest growing economies are in Africa, "Black Panther" provides a vision of what African countries could look like if some things are done right. 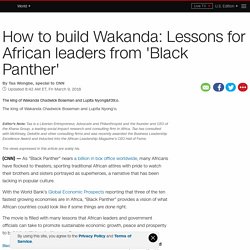 The movie is filled with many lessons that African leaders and government officials can take to promote sustainable economic growth, peace and prosperity to build their Wakanda. Here are five: Empower and elevate women, and ensure you surround yourself with them. #Killmonger #BlackPanther… Meet the Amazonian Terminators of Dahomey, the Most Feared Women in History. Digging the Dora Milaje? Then Love the Dahomey Women Warriors. The Women Soldiers of Dahomey Women in African History Comic Strip 0. YZ and Her “Amazone” Women Warriors on Senegalese Walls. Posted on January 14, 2015 According to historical accounts of the First Franco-Dahomean War, in the 1890s it was the highly trained military women who were chopping off the heads of the French. 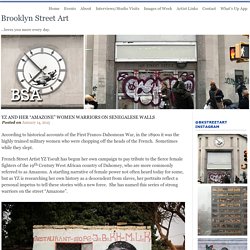 Sometimes while they slept. French Street Artist YZ Yseult has begun her own campaign to pay tribute to the fierce female fighters of the 19th Century West African country of Dahomey, who are more commonly referred to as Amazons. A startling narrative of female power not often heard today for some, but as YZ is researching her own history as a descendent from slaves, her portraits reflect a personal impetus to tell these stories with a new force. Songs About the Southland: Marvel's Black Panther vs. the Klan - PopMatters. Jungle Action Feat Publisher: MarvelLength: 30 pagesWriter: Don McGregor, Rich Buckler, Billy GrahamPrice: 25cPublication Date: 1973-07Amazon. 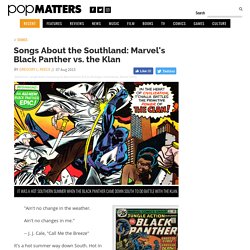 Told not to drum, this woman is breaking a centuries-old taboo. Editor's Note: CNN is committed to covering gender inequality wherever it occurs in the world. 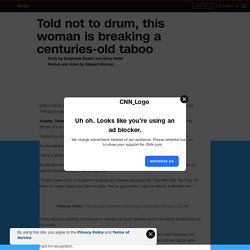 This story is part of As Equals, a year-long series. Arusha, Tanzania — Kasiva Mutua carefully unpacks her drums, placing them on the paving stones of a courtyard. Shaded by a tree from Tanzania's harsh midday sun she settles, cross-legged behind them. As she starts to play her eyes close as she loses herself in the rhythm. ORIGINAL ( BGM ) BACKGROUNDSCORE. Awesome #BlackPanther inspired portrait of President Barack Obama by @heir_porter… Can Superheroes Be Woke?: Black Liberation and the Black Panther – AAIHS. *This post is part of our new blog series on The World of the Black Panther. 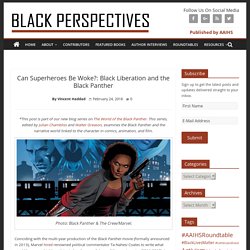 This series, edited by Julian Chambliss and Walter Greason, examines the Black Panther and the narrative world linked to the character in comics, animation, and film. Coinciding with the multi-year production of the Black Panther movie (formally announced in 2013), Marvel hired renowned political commentator Ta-Nahesi Coates to write what would become a highly anticipated and successful run of the comic series (2016-2017). In subsequent and short-lived spinoffs, World of Wakanda and Black Panther & The Crew, Marvel hired well-known writers Roxanne Gay and Yona Harvey to work alongside Coates and develop more narrative arcs for their highly valued, superhero property.

On the Duality and Double Consciousness of Black Panther. Adele-Hello (Xhosa-Version ) Miriam Makeba - Pata Pata (Live 1967) 'Black Panther' puts spotlight on Xhosa, a real African language spoken by Nelson Mandela. The "Black Panther" movie is winning attention for breaking Hollywood norms through its almost entirely black cast and crew, powerful black leading ladies and a superhero who is not, for once, white.

Interested in Marvel? Add Marvel as an interest to stay up to date on the latest Marvel news, video, and analysis from ABC News. How African designs inspired Marvel's Black Panther. The Afrofuturistic Designs of ‘Black Panther’ How do you outfit an African queen? For Ruth E. Carter, the costume designer for “Black Panther,” it involved a Zulu hat and a 3-D printer. In her 30 years in film, Ms. Carter has made her career putting images of African-American history and contemporary culture onscreen, from Spike Lee’s canon to “Selma” and the recent remake of “Roots.” Thread on African tribes/cultures featured in #BlackPanther. #Wakanda. Letitia is literally queen of all things. She’s free-styling effortlessly…

Why museum professionals need to talk about Black Panther – The Hopkins Exhibitionist. By Casey Haughin, ’19 The seminal film Black Panther has become an international sensation in the week following its release. Notable for its impeccable dialogue, witty banter, and nearly all POC cast, Black Panther provides a platform to discuss a multitude of topics on a national scale. Black Panther: The Young Prince. Before we meet Marvel Studios’ “Black Panther” on the big screen, young adults can get a look at the adventures of young Wakanda ruler-to-be in the new book, “Black Panther: The Young Prince.” Written by Coretta Scott King award-winning author Ronald L. Smith, we get a glimpse into young T’Challa’s life as he struggles with family, friends, and dark enemies. We spoke with Ronald L. Smith about T’Challa’s journey that helps shape the young prince and readies him for his royal destiny.