Michael Jackson’s music and Louis CK’s comedy after #MeToo. For a few years when I was a teenager, my favorite movie was Edward Scissorhands. 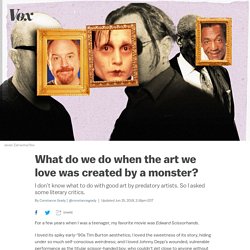 I loved its spiky early-’90s Tim Burton aesthetics; I loved the sweetness of its story, hiding under so much self-conscious weirdness; and I loved Johnny Depp’s wounded, vulnerable performance as the titular scissor-handed boy, who couldn’t get close to anyone without hurting them. I laughed when Edward accidentally punctured a waterbed in a wordless, humiliated frenzy. I cried when he accidentally injured his girlfriend. I cried more for Edward than for the bleeding girlfriend, actually, because I could see that it hurt him to hurt her, and I was more interested in his pain than in hers.

Edward Scissorhands eventually stopped being my favorite movie, but I continued to love it in that part-embarrassed, part-sentimental, part-genuine way you love the art you imprint on as a teenager. I loved this movie. Frida Kahlo's Forgotten Politics. The Brooklyn Museum’s new exhibit, “Frida Kahlo: Appearances Can Be Deceiving,” focuses on the artwork, clothes, and personal possessions of Mexican artist and icon Frida Kahlo. 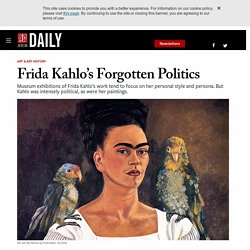 Kahlo’s likeness and aesthetics have been replicated in the mass media, though the resulting merchandise often strays far from her original intentions. The erasure of her artwork’s political nature, emphasizing instead her personal style, is typical for an artist like Kahlo. Her personal life, physical ailments, and tempestuous relationship with Diego Rivera have provided romantic narratives with which audiences can connect.

Art historian Janice Helland writes in Women’s Art Journal, “As a result, Kahlo’s works have been exhaustively psychoanalyzed and thereby whitewashed of their bloody, brutal, and overtly political content.” Helland argues that Kahlo’s politics were a defining feature of her artwork. Kahlo’s work spoke to both her health struggles and nation’s struggles. By: Janice Helland Woman's Art Inc. Aeon. Justin was in a reflective mood. 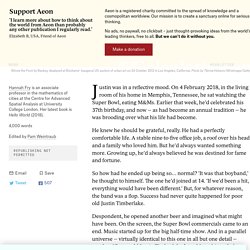 On 4 February 2018, in the living room of his home in Memphis, Tennessee, he sat watching the Super Bowl, eating M&Ms. Earlier that week, he’d celebrated his 37th birthday, and now – as had become an annual tradition – he was brooding over what his life had become. He knew he should be grateful, really. He had a perfectly comfortable life. Conquering spaces of complicit amnesia in Jerusalem: portrait of two independent art institutions. Only a 15 minutes walk through the dusty streets of Jerusalem takes us from Al Ma’mal foundation in the east, to the Museum on the Seam in the west of the city; a walk through the monotone ochre coloured streets, framed by street sellers and a bustling highway. 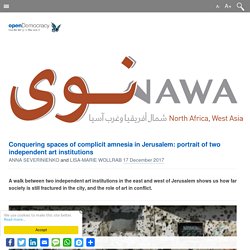 Located in the heart of the conflict, the two art organisations take a stance and a position from within: being based in Jerusalem around the old city centre, Al Ma’mal and the Museum on the Seam shed light on the everyday friction between Palestine and Israel, speaking up through art. It is this short 15 minutes walk which lets us cross borders: through religions ; through politics; through history and society. Crossing a land that has been claimed by Muslims, Jews and Christians over the course of time, crossing from east to west, between two exceptional art organizations. Both art foundations provide a space for criticism. The Wrong Questions - Richardson. How a Beirut graffiti artist is using his murals to try to unite a fragmented city. Yazan Halwani is a young Beiruti artist who paints murals of revered Lebanese and Arab figures on prominent walls in a bid to help overcome sectarianism in this fragmented city. 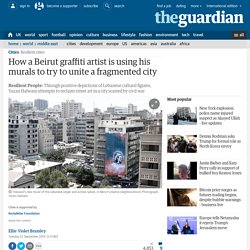 “What I try to do,” he explains down a fuzzy line from Beirut, “is write the stories of the city, on its own walls – creating a memory for the city.” The Lebanese civil war had officially ended a few years before Halwani was born in 1993, but it continued to shape the Beirut he grew up in. “You could actually feel the remnants of the war in the city. Buildings had been destroyed but, most importantly, you could feel it in the political landscape and in the people.” During the 15-year-long war, the city of Beirut had been divided broadly into two – east Beirut was largely Christian and French speaking, while west Beirut was largely Muslim and Arabic speaking. Three questions not to ask about art – and four to ask instead. Art raises a lot of questions. 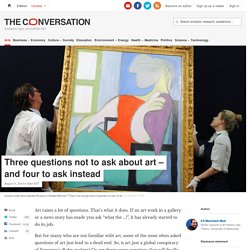 That’s what it does. If an art work in a gallery or a news story has made you ask “what the …?” , it has already started to do its job. What in the World is Art? – How do You Know. Noun1 the expression of creative skill through a visual medium such as painting or sculpture. 2 the product of such a process; paintings, drawings, and sculpture collectively. 3 (the arts) the various branches of creative activity, such as painting, music, and drama. 4 (arts) subjects of study primarily concerned with human culture (as contrasted with scientific or technical subjects). 5 a skill: the art of conversation. — ORIGIN Latin ars.Oxford English Dictionary. 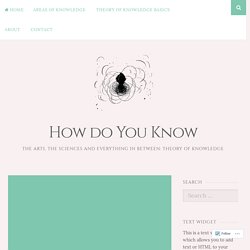 Taken from Art is perhaps, the most elusive of the Areas of Knowledge. This is because there is no general consensus of what Art even is. New Exhibit Captures Nearly Eight Decades of Protest Art. Why Authoritarians Attack the Arts - The New York Times. In 1937, ascending leaders of the Third Reich hosted two art exhibitions in Munich. 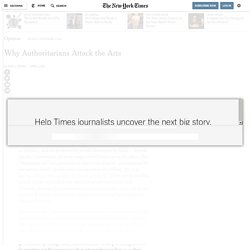 TED-Ed - In celebration of Ramadan, brush up on the... TED-Ed - This painting represents a modern perspective on... What is the perfect work of art? Dali's enigma, Picasso's protest: the most important artworks of the 1930s. Salvador Dalí’s The Enigma of Hitler is a ghostly farewell to the 1930s. 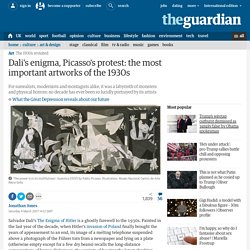 Painted in the last year of the decade, when Hitler’s invasion of Poland finally brought the years of appeasement to an end, its image of a melting telephone suspended above a photograph of the Führer torn from a newspaper and lying on a plate (otherwise empty except for a few dry beans) recalls the long-distance conversations of barren diplomacy, the anxiety of hearing the latest shocking news, the dread of waiting for war.

An umbrella that could easily belong to the prime minister Neville Chamberlain hangs impotently in the ether, fading away – as colourless as the bleak landscape with which Dalí holds a mirror to his age. The grey desolation of this image is all the more poignant because Dalí was no political activist. He was, indeed, so reluctant to take sides that he got thrown out of the surrealist movement for confessing that he dreamt about the Nazi leader. Long Before There Was 'Fake News,' There Were 'Fake Photos' : Goats and Soda. Orientalist Study, 1858. 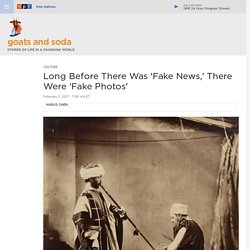 Vanessa Ruiz: The spellbinding art of human anatomy. Auto mechanics pay homage to the legendary artworks of Renaissance painters. American photographer Freddy Fabris created unusual versions of famous Renaissance paintings. The idea came to him during a visit to a garage somewhere in the western United States. ’Why not?’ Thought Fabris, who decided to combine the uncombinable. The photographer tried to preserve the distinctive style of great Renaissance master painters, ever so slightly spicing it up. Bright Side offers you a chance to take a look at the final images, in which the two eras merged into something truly surreal.

Theconversation. How does art help us survive? This is a question that clearly fascinates MONA founder David Walsh. MoMA Curator Laura Hoptman on How to Tell a Good Painting From a “Bogus” Painting. Effective date: February 12, 2014. Thank you for visiting Artspace.com (the "Site") owned and operated by Artspace LLC. ("Artspace"). Your use of the Site indicates that you have read, understood and agree to these terms of use ("Terms"). If you do not agree to these Terms, you may not access or use the Site. Bioshock proved that video games could be art. Philosophers Rumble Over Van Gogh’s Shoes. Cologne’s Wallraf Richartz Museum has launched an impressive new exhibition entitled “Vincent van Gogh: Shoes,” built around a celebrated painting by the Dutch master from 1886. Some might wonder how an exhibition can be framed around a single work with such a modest subject matter, but the curators provide us an impressive model.

The exhibition focuses on the extraordinary role this painting has played in modern philosophy surrounding art, its reception, and its relationship to the history of ideas. A half dozen philosophers and art historians have written about van Gogh’s painting of shoes, including Martin Heidegger, Meyer Schapiro, and Jacques Derrida. The exhibition takes us on a trip through their writings—sometimes comic, occasionally downright rude, and often exhilarating. These thinkers certainly bar no holds in their clamber to be exceedingly profound. We should start with the facts now established as to the origins of this painting. And then we come to Jacques Derrida. Why Bob Dylan deserves his Nobel literature win.

Tracy Chevalier: Finding the story inside the painting. Why art is important. What is art for? Alain de Botton's animated guide – video. ‘Based on a true story’: the fine line between fact and fiction. Cleaner throws artwork into bin in Italy - would you have made the same mistake? An art exhibit in Italy has been restored after it was binned by a cleaner, who mistook it for a mess from the previous night. The artwork, by famous Milan female duo Sara Goldschmied and Eleonora Chiar, is called “Where shall we go dancing tonight?” 6 Photographers Capture Same Person But Results Vary Widely Because of a Twist (VIDEO) Undiscovered country: the Globe's travelling Hamlet in a Jordanian refugee camp.