Identity V Art References. I get asked a lot of times on how I create my color palettes, now I'm finally able to make a guide on it! Hoping this helps out artists, designers, business owners, students/educators, and aspiring creatives! (1/2) Okay i’m making a thread on irish pronunciation for anyone who doesn’t know the irish language(yes, it’s a language) has its own phonetic rules that are actually pretty consistent. it’s maybe confusing to look at at first as many letter combinations arnt. 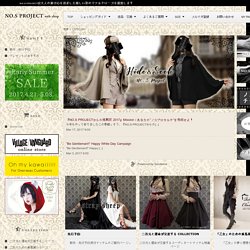 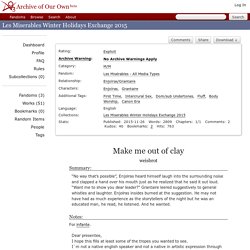 “I have read that you have to-” Enjolras broke off panting and tried to grab onto Grantaire’s wrist to demonstrate. “Well,” Grantaire grinned, allowing Enjolras to guide his hand between Enjolras' thighs and under the shirt. “Have you read about this too?” He whispered into Enjolras’ ear as he danced his fingers over Enjolras’ ass and pressed a finger to his entrance. Hours before that Enjolras would never have imagined having the group cynic do those things to him. Courfeyrac finished his tale by the head of the table with his foot on the chair, bowing to his howling audience. Reassured, Grantaire continued to stage whisper, singling out a different ami with eye contact as he told his story.

Once inside, Enjolras took Grantaire’s coat while the other lighted a few candles around the room. Food Timeline: food history research service. OK to make a font out of your own writing - stuff and things. Ulicam: Easter tutorial: How to color eggs with onion shells. My favorite holiday is coming up so I thought I would re-post this tutorial from last year. 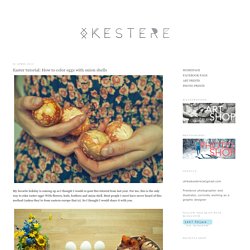 For me, this is the only way to color easter eggs! With flowers, leafs, feathers and onion shell. Most people I meet have never heard of this method (unless they're from eastern europe that is). So I thought I would share it with you. This is what you need! Moist the egg and the flowers/plants with water, that will make it easier for them to stick to the egg. Moist the onion shells and wrap it carefully around the egg. Wrap the string tight around the egg. Put all the eggs together with the onion shell leftovers into a pot. Rinse the cooked eggs in cold water and wrap the string and onion shell carefully of.

This beautiful print was made with a little white swan feather. Rub the eggs in bacon or some other grease to make them shine even when they're dry. Go outside and find some nice moss, the eggs will look beautiful resting on it :) Good luck! ビン3Dモデル12種セット. 女子高校生の日常. OK this Emofuri thing is confusing, let’s try Live2d’s Cubism! At one point in their lives, everyone embarks upon an exciting journey… Coris #8 - Flavor-changing starch syrup おかしな水あめ. 【ドット絵】「魔理沙ドット打ったのにちょっとだけ説明いれたもの。」漫画/茶。 Unofficial Phantasy Star Online 2 Blog. At first glance, you may recognize the image below as the popular PSO2 FOnewearl (Force Newman Female) character, Rupika (ルピカ). 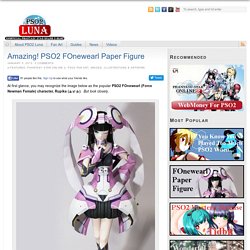 But look closely. FOnewearl Paper Figure Yes, it’s not your normal FOnewearl fan art illustration… It’s A FOnewearl Paper Figure! This amazing work of art was created by a Japanese paper figure artist who goes by the name of Suiraku (水楽). As the name “Paper Figure” implies, the entire FOnewearl (also called FOnewear in Japan) model you see is made from… yes you got it – paper! The finished paper figure model is 26cm in height – slightly taller than a small soda bottle in size, as you can see in the image below. The Enlightening Brush Japanese Calligraphy Studio. Customize your Freedom Palette. (1) 「ひとま@5/4西E75a」's Profile. (2) 「ひとま@5/4西E75a」's Profile.