Sensex, Nifty jump over 2% to record highest increase in 2 months. The Indian markets on Tuesday posted their biggest single-day gain in nearly two months as global investor sentiment improved on faster vaccine rollout in the US and optimism around Am­erican President Joe Biden’s major infrastructure package. 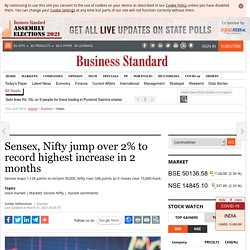 Market players said JSW Steel’s completion of the resolution plan for Bhushan Steel and Power, which included payment of Rs 19,350 crore to banks, helped boost sentiment. They also attributed the sharp up-move to technical factors, such as the rebalancing of Nifty indices taking effect. Analysts said many blue-chip stocks had entered “oversold” territory last week, having come off sharply from their February highs. The benchmark Sensex rose 1,128 points, or 2.3 per cent, to end the session at 50,136. The Nifty50 index ended the session at 14,845, a gain of 338 points, or 2.3 per cent. Investor wealth jumps over Rs 6 trillion in two days of market rally. 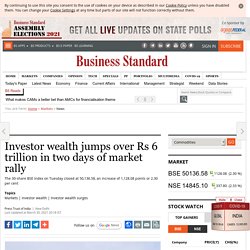 The 30-share BSE index on Tuesday closed at 50,136.58, an increase of 1,128.08 points or 2.30 per cent. During the day, it gained 1,259.95 points to touch 50,268.45. On Friday, the benchmark had closed 568.38 points higher. Markets were closed on Monday for Holi. Driven by the rally, the market capitalisation of BSE-listed companies soared Rs 6,02,001.9 crore to Rs 2,04,77,472.33 crore in two trading days. "Beating worries of increasing Covid cases and rising bond yields, the domestic market sparked a rally today as investors turned their focus to economic recovery supported by vaccination drives. HDFC Bank was the lead gainer among the 30-share BSE index stocks, rising 4.11 per cent. On the other hand, M&M, Axis Bank and Bharti Airtel were the laggards. In the broader market, the midcap and smallcap indices gained up to 1.30 per cent. Nazara hits lower limit after surging 84% on debut, stock ends 45% up. Shares of online gaming company Nazara Technologies surged as much as 84 per cent over their issue price during their trading debut on Tuesday. 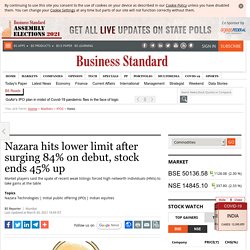 The stock failed to hold on to the gains as wealthy investors rushed to book profits. Heaving selling saw it hit its 20 per cent lower limit over the discovered price of Rs 1,990. The discovered price is arrived at after an hour-long pre-open session in order to curb volatility. A stock is allowed to gain or fall a maximum of 20 per cent over the discovered price. India's 2021 economic output likely to remain below 2019 level: UN report. India's economic output in 2021 is expected to remain below the 2019 level despite roll-out of the vaccine to deal with the menace of the coronavirus pandemic, said a report by the United Nations Economic and Social Commission for Asia and the Pacific (UNESCAP) released on Tuesday. 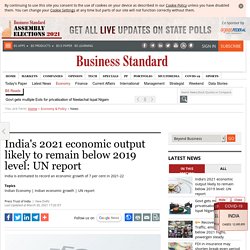 India, according to the 'Economic and Social Survey of Asia and the Pacific 2021: Towards post-COVID-19 resilient economies', is estimated to record an economic growth of 7 per cent in 2021-22, over a contraction of 7.7 per cent witnessed in the previous fiscal on account of the pandemic's impact on normal business activity. Observing that India entered the pandemic with subdued GDP growth and investment, the report said, "Following one of the most stringent lockdowns in the world, the economic disruptions that the country experienced mounted in the second quarter of 2020. " Rupee slumps 34 paise to 72.85 against the US dollar in early trade.

The Indian rupee slumped 34 paise to 72.85 against the US dollar in opening trade on Tuesday as rising crude oil prices and a strong American currency weighed on investor sentiment. 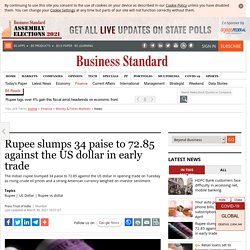 At the interbank forex market, the domestic unit opened at 72.85 against the US dollar, registering a decline of 34 paise over its previous close. On Friday, the rupee had settled at 72.51 against the American currency. The forex market was closed on Monday on account of Holi. Govt gets multiple EoIs for privatisation of Neelachal Ispat Nigam. Govt gets multiple EoIs for NINL privatisationThe government has received multiple expressions of interest from bidders for privatisation of Neelachal Ispat Nigam (NINL), DIPAM Secretary Tuhin Kanta Pandey said on Monday. 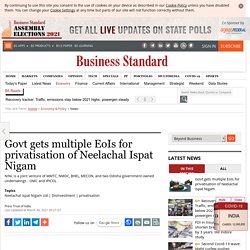 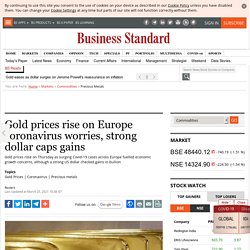 Spot gold was up 0.1% at $1,736.31 per ounce by 0346 GMT. U.S. gold futures were also up 0.2% at $1,735.90 per ounce. "At these levels, gold might be catching a bit of safe-haven buying now, which is a change from what we were looking at just a few days ago," said Michael McCarthy, chief market strategist at CMC Markets. Wabco India slips 10% as promoter begins to offload stake via OFS. Shares of Wabco India slumped 10 per cent to Rs 5,510 on the BSE in the intra-day trade on Thursday after the promoter's two days stake sale through offer-for-sale (OFS) route began today. 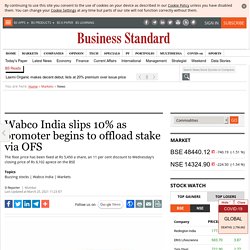 The floor price has been fixed at Rs 5,450 a share, an 11 per cent discount to Wednesday's closing price of Rs 6,102 apiece on the BSE. The issue opened on Thursday for non-retail investors and will open on Friday for retail investors. As per the stake sale plan, the promoter ZF International UK will offload 18.10 per cent stake (Base Issue: 9.05 per cent + Oversubscription Issue: 9.05 per cent) through OFS. European stocks inch lower as Covid lockdowns cloud growth outlook. European stocks inched lower on Thursday as investors swapped energy and retail stocks with shares of companies seen as safer during heightened economic uncertainty following a new round of coronavirus restrictions in the euro zone. 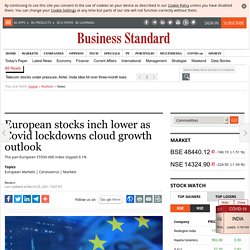 The pan-European STOXX 600 index slipped 0.1%, with oil & gas stocks falling 1.4% on the back of weaker crude prices. Global sentiment took a hit after a selloff in Chinese technology shares on worries that they will be de-listed from U.S. bourses, while the number of coronavirus cases in Germany saw the biggest increase since Jan. 9. European markets have struggled this week despite a surprisingly strong recovery in March business activity.

Investors also looked past a survey that showed German consumer morale improved for the second month in a row heading into April, but a recent decision to extend restrictions clouded the outlook. Analysts expect euro area to grow by 3.9% this year and the United Kingdom by 4.9%. Bitcoin slide adds to signs of step back in retail trading mania. Bitcoin fell amid a wider retreat in assets that had earlier ridden a wave of stimulus-infused optimism among retail traders. 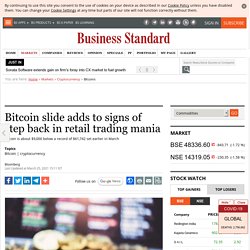 The largest cryptocurrency dipped 2% to about $52,850, a two-week low, as of 7:23 a.m. in London. The token is mired in its longest losing streak since December. The wider Bloomberg Galaxy Crypto Index is also struggling. Speculation is growing that more of the latest stimulus checks in the U.S. will be spent in the real economy rather than markets as vaccinations help to return life to something more like normal.

The number of call options traded in the U.S. has slipped from the records earlier this year and high-profile investments like GameStop Corp. and the ARK Innovation ETF are sliding. Do not see India's rating downgrade because of higher spending: FM. Finance Minister Nirmala Sitharaman on Wednesday said India enjoys an investment grade rating and she does not see a rating downgrade because of higher spending. Replying to a debate on Finance Bill 2021 in the Rajya Sabha, she cited low inflation, higher GDP growth, record foreign investment and lower fiscal deficit to defend her government's handling of the economy.

She attacked the Congress-led UPA government for leaving a "mess" and mismanaging the economy which the Modi administration set right. Fuel prices soften after a month; Suez Canal blockage may undo that. Petrol and diesel prices softened in Delhi Wednesday after being stable for almost a month. Oil marketing companies cut petrol price by 18 paisa and diesel by 17 paisa on the back of Brent crude oil that has tumbled from $70 a barrel on March 11 to $60 on March 23. Crude oil prices fell after parts of Europe again locked down to contain Covid-19, resulting in a delayed demand recovery. India’s government-owned oil marketing companies had deferred raising prices, "nudged" by the government in light of assembly elections in four states and the union territory of Puducherry.

Govt likely to resume bankruptcy filings as halt set to end on March 25. India’s government is considering resuming fresh bankruptcy filings after the current suspension expires on March 25, people with knowledge of the matter said. The lifting of the halt would come even as a resurgence in virus cases threatens the nascent economic recovery. It could spark a wave of new insolvencies, pent up from last year when businesses were hurt by India’s first economic contraction in decades. Prime Minister Narendra Modi’s government last year halted the process of initiating most fresh insolvency proceedings to insulate cash-strapped borrowers hit by the pandemic for six months starting March 25, and that was extended twice during the year. The suspension is unlikely to be prolonged further because a return to normality is needed, the people said, asking not to be identified citing rules.

Railways registers 70% loss in passenger earnings; sees profit in freight. The Railways suffered a loss of Rs 38,017 crore in the passenger segment in the last fiscal due to the coronavirus crisis, but some of what it lost was compensated by the goodwill it earned by running Shramik Special trains, ferrying essentials and through innovation in freight movement which helped surpass last years' revenues. While regular train services are yet to resume, the focus of the Railways has been to ensure that its freight revenues hold steady. The Railways managed to surpass the freight revenues of last year by Rs 1868 crore or two percent as of March 22 -- paltry gains, but a huge boost, given the problems that came with the coronavirus lockdown. As far as the passenger segment is concerned, while it netted Rs 53525.57 last year as revenue, this year it could earn only Rs 15507.68, 71.03 per cent less.

Lodha leads as developers become richer by 26% despite Covid-driven crash. Despite the pandemic-induced plunge in realisations, the number of new rupee-billionaires in the realty world continued to swell adding eight new entrants to the list of the Hurun India's top-100 richest realty developers. The list has been topped by developer and senior BJP leader Mangal Prabhat Lodha MP Lodha of Macrotech, for the fourth year in a row. According to Hurun India real estate rich list, the total wealth of these 100 richest builders jumped a full 26 per cent from to Rs 3,48,660 crore over the previous year. Bank NPAs declined to Rs 5.70 trillion at December-end: Anurag Thakur. Non-performing assets of banks declined to Rs 5.70 lakh crore in December 2020 and the recovered amount stood at Rs 2.74 lakh crore following a slew of measures taken by the government, Union Minister Anurag Singh Thakur told Rajya Sabha on Tuesday. Easy Trip Planners tumbles 7%, drops below IPO price of Rs 187.

Shares of Easy Trip Planners, on Tuesday, slipped 7 per cent to Rs 183.60, on the BSE in intra-day trade, thereby falling below its issue price of Rs 187 per share. The online travel company had made its stock market debut on Friday, March 19. IPV leads seed round in FMCG startup Happy Jars. Covid: Cabinet approves vaccination for people above 45 years from April 1. Government on Tuesday allowed people above 45 years to get vaccinated against coronavirus from April 1. Bill to increase FDI limit in insurance sector gets Parliament's nod. A bill to increase foreign direct investment (FDI) in the insurance sector from 49 per cent to 74 per cent was approved by Parliament with the Lok Sabha giving green signal to the legislation by a voice vote on Monday. Piloting the Bill, Finance Minister Nirmala Sitharaman said that hiking the FDI limit in the insurance sector will help insurers to raise additional funds and tide over financial problems. The Insurance (Amendment) Bill, 2021 was earlier passed by the Rajya Sabha last week.

Average daily FASTag collection crosses Rs 100 crore-mark: Gadkari. The average daily toll collection through FASTag has reached Rs 100 crore daily, Parliament was informed on Monday. The government has made FASTags mandatory from February 15 midnight and any vehicle not fitted with it will be charged double the toll at electronic toll plazas across the country. NHAI suffers Rs 814 crore loss in toll revenue due to farmers' protest. National Highways Authority of India suffered a toll revenue loss of Rs 814.4 crore till March 16 on account of farmers' protest in three states, Parliament was informed on Monday.