Fed holds policy steady as US Presidential election hangs in balance. The Federal Reserve kept its loose monetary policy intact on Thursday and pledged again to do whatever it can in coming months to sustain a US economic recovery threatened by a spreading coronavirus pandemic and facing uncertainty over a still undecided presidential election. 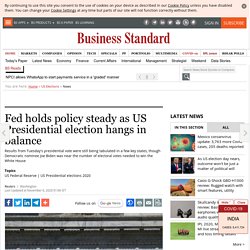 Results from Tuesday's presidential vote were still being tabulated in a few key states, though Democratic nominee Joe Biden was near the number of electoral votes needed to win the White House. The US central bank did not speak about the election in a policy statement released after its latest two-day meeting, but Fed Chair Jerome Powell is likely to address any concerns about the weeks ahead in a news conference at 2:30 p.m. GoPro Hero 9 Black: Good action camera for both amateurs and professionals.

From a new 23.6-megapixel sensor for 5K video recording to a dual-screen design and bigger-capacity battery, the Gorpo Hero 9 Black features that most GoPro enthusiasts had long been waiting for. 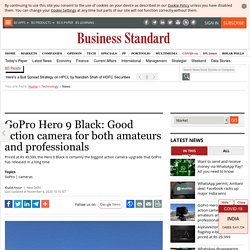 Bigger than any of its previous iterations, this action camera might require some tweaking in your existing mount set-up. Packed court, unrepresentative senate: Is America Becoming a Failed State? As I write this, it seems extremely likely that Joe Biden has won the presidency. 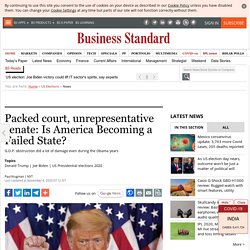 And he clearly received millions more votes than his opponent. What aviation gloom? IndiGo prepares a mega order of 150 aircraft engines. IndiGo, India’s biggest airline, is in talks with Pratt & Whitney and CFM International Inc. for its next batch of jet engine orders, according to people familiar with the matter, a rare sign of dealmaking in a sector that’s been paralyzed by the virus pandemic. 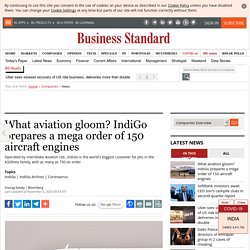 Global telecom gear MNCs urge govt to change norms, seek level field. Global telecom equipment vendors have urged the government to make sweeping changes to the method of calculating value addition norms, so that they are eligible for government contracts under the public procurement policy for the Preference to Make in India (PMI) scheme. 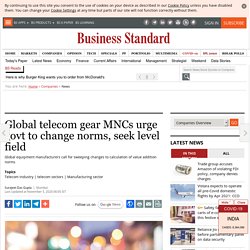 The scheme mandates preference for domestic products in public-funded projects. The letter, sent to the DoT a few days ago through the Cellular Operators Association of India (COAI) is critical for two reasons. Here is why Burger King wants you to order from McDonald's. On Monday, Burger King UK posted a message on Twitter that in marketing terms appeared to scream the unthinkable in its headline: “Order from McDonald’s.” 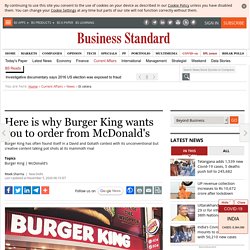 However, the Twitterverse soon responded with the desired applause. They felt that the multinational fast food chain simply oozed class as it urged consumers to spend and bail out restaurants employing thousands of people. Indians raise bets on American stocks ahead of US Presidential elections. Domestic brokerages have seen clients raise bets on American stock markets in the run-up to the US presidential elections, results of which are awaited. 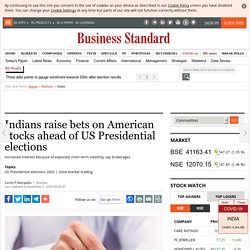 Some brokerages announced tie-ups to offer overseas stock market access to their clients in recent months, fuelling increased investment activity, even as volatility increased ahead of poll results. Many younger customers look to invest in technology firms that they are familiar with but which are not available in India, said Prakarsh Gagdani, chief executive officer at 5paisa Capital. Companies like Facebook and Twitter are listed in the US. Qualcomm forecasts strong first quarter revenue on 5G phone sales growth. Most see 5% rise in health insurance premiums, says Policybazaar. Health premiums have gone up by more than 50 per cent for approximately 5 per cent of the policyholders this year while for around 43 per cent, it has gone up by 5 per cent, data compiled by insurance aggregator Policybazaar revealed. 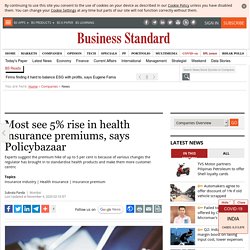 However, around 23 per cent of the policyholders have seen no change in their health premiums. Experts suggest the premium hike of up to 5 per cent is because of various changes the regulator has brought in to standardise health products and make them more customer centric. From October 1, insurance companies have had to include certain illnesses which they could earlier exclude from their coverage. But post insurance regulator’s diktat, insurers have now included treatment for mental illness, age-related degeneration, internal congenital diseases and artificial life maintenance. Google tells Android users to update Chrome to avoid critical bug.

Google has advised Android smartphone users to update the Chrome browser after it patched a Zero-Day bug in the browser. 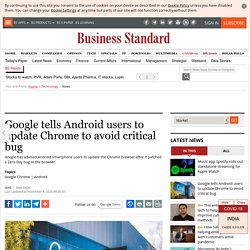 Google said the bug was exploited to allow attackers to bypass and escape the Chrome security sandbox on Android devices and run code on the underlying OS, reports ZDNet. The tech giant has released security updates for the Chrome for Android browser to fix the Zero-Day vulnerability. This marks the third Chrome Zero-Day discovered by the Google Threat Analysis Group (TAG) team in the past two weeks. The first two Zero-Days affected only Chrome for desktop versions. Firms finding it hard to balance ESG with profits, says Eugene Fama. Companies across the world are finding it difficult to balance environmental, social and governance (ESG)-focused investing with profitability, and regulators too aren’t thinking hard about it, said Eugene Fama, the 2013 Nobel Prize winning economist. 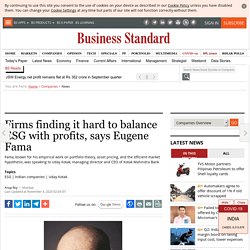 Abu Dhabi sovereign fund first to get 100% tax exemption in infra. In line with the Budget announcement, the government has allowed income-tax exemption to Abu Dhabi’s sovereign wealth fund (SWF), MIC Redwood 1 RSC, for making long-term investments in India in specified priority sectors of infrastructure. It is the first foreign SWF to get 100 per cent tax exemption in the case of income from interest, dividend, and long-term capital gains for its investment in infrastructure. The Central Board of Direct Taxes (CBDT) on Monday announced this. The government, under the Finance Act, 2020, had allowed tax exemption for SWFs and pension funds in the case of incomes from investment in 34 key infrastructure sectors, including hotels, cold chains, educational institutions, hospitals, and gas pipelines.

Casio G-Shock GBD-H1000 review: Rugged watch with smart features, utility. Casio’s G-Shock has maintained its niche fan base of people that prefer rugged look and study design. So far, the G-Shock line-up has been restricted to non-smart watches despite the growing clutter of smartwatches but 2020 seems to be the year of the unusual. Known for making watches for adventurers, Casio in August launched the G-Shock GBD-H1000. This smartwatch is one-of-its-kind as it carries forward Casio’s legacy of making rugged watches but with smart features this time. It has built-in GPS for location services, multiple sensors, and solar charging on top of regular USB charging. Besides, it features an optical heart rate sensor.