Three Habits Of The Most Creative Problem Solvers. Huffingtonpost.com. Sand bowls by leetal rivlin. Download All 36 of Jan Vermeer's Beautifully Rare Paintings (Most in Stunning High Resolution) Smithsonian Digitizes & Lets You Download 40,000 Works of Asian and American Art. Art lovers who visit my hometown of Washington, DC have an almost embarrassing wealth of opportunities to view art collections classical, Baroque, Renaissance, modern, postmodern, and otherwise through the Smithsonian’s network of museums. 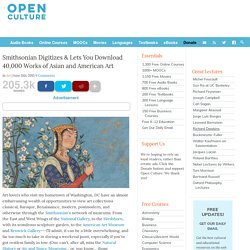 From the East and West Wings of the National Gallery, to the Hirshhorn, with its wondrous sculpture garden, to the American Art Museum and Renwick Gallery—I’ll admit, it can be a little overwhelming, and far too much to take in during a weekend jaunt, especially if you’ve got restless family in tow. (One can’t, after all, miss the Natural History or Air and Space Museums… or, you know… those monuments.) In all the bustle of a DC vacation, however, one collection tends to get overlooked, and it is one of my personal favorites—the Freer and Sackler Galleries, which house the Smithsonian’s unique collection of Asian art, including the James McNeill Whistler-decorated Peacock Room. (See his “Harmony in Blue and Gold” above.) via Kottke Related Content: 13 Van Gogh's Paintings Painstakingly Brought to Life with 3D Animation & Visual Mapping. New York Public Library Puts 20,000 Hi-Res Maps Online & Makes Them Free to Download and Use.

When I was a kid, my father brought home from I know not where an enormous collection of National Geographic magazines spanning the years 1917 to 1985. 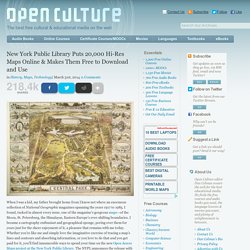 I found, tucked in almost every issue, one of the magazine’s gorgeous maps—of the Moon, St. Petersburg, the Himalayas, Eastern Europe’s ever-shifting boundaries. Nine Frida Kahlo Quotes to Inspire Your Innate Sense of Creativity. Frida Kahlo, like many other artists and painters made a unique body of work around her experiences of intense pain and suffering; both in reaction to her crippled body following a bus accident and her tumultuous relationship with mentor and fellow painter Diego Rivera. 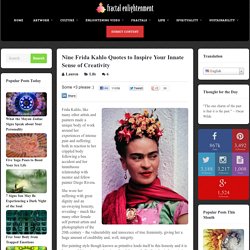 She wore her suffering with great dignity and an un-swaying honesty, revealing – much like many other female self portrait artists and photographers of the 20th century – the vulnerability and innocence of true femininity, giving her a huge amount of credibility and, well, integrity. Her painting style though known as primitive lends itself to this honesty and it is because of this unique exploration of such human frailty that she, in her paintings and photographs as well as her quotes, probably has a huge amount to teach us on the art of mortality. 1) “I don’t paint dreams or nightmares, I paint my own reality”

The Life of Death. Embroidered X-Rays by Artist Matthew Cox. Magic Mushrooms That Turn Your Room Into A Glowing Forest. These whimsical fairy lamps can turn an ordinary room into an enchanted forest! 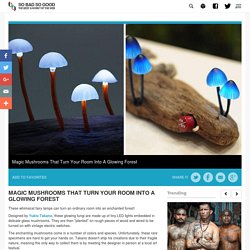 Designed by Yukio Takano, these glowing fungi are made up of tiny LED lights embedded in delicate glass mushrooms. They are then "planted" on rough pieces of wood and wired to be turned on with vintage electric switches. The enchanting mushrooms come in a number of colors and species. Unfortunately, these rare specimens are hard to get your hands on.

Takano doesn't ship his creations due to their fragile nature, meaning the only way to collect them is by meeting the designer in person at a local art festival. Guest Artist: Stitcher! D.I.Y Comics. Dense Mixed-Media Sculptures Depict a Poignant Collision of Urban and Natural Worlds. From This Distance: Sound Pearls, 2014. 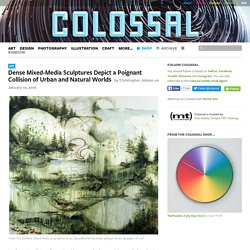 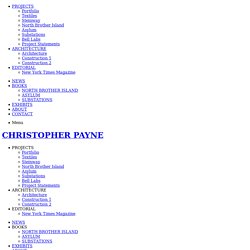 More Disturbing (But Amazing) Pictures Expose The Absurdities Of Modern Culture *Warning: Graphic Images* Pictures like the ones you are about to see have been surfacing more and more lately, as artists around the world feel compelled to respond to some of the ugliness they see in the world. 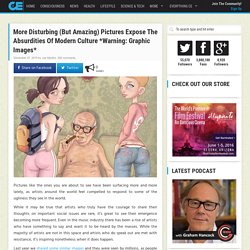 Google Puts Online 10,000 Works of Street Art from Across the Globe. Circling Birdies by Cheko, Granada Spain Since last we wrote, Google Street Art has doubled its online archive by adding some 5,000 images, bringing the tally to 10,000, with coordinates pinpointing exact locations on all five continents (though as of this writing, things are a bit thin on the ground in Africa). 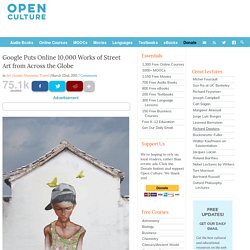 Given the temporal realities of outdoor, guerrilla art, pilgrims may arrive to find a blank canvas where graffiti once flourished. (RIP New York City’s 5 Pointz, the “Institute of Higher Burning.”) A major aim of the project is virtual preservation. Animated Short Film (Full HD) French Student Sets Internet on Fire with Animation Inspired by Moebius, Syd Mead & Hayao Miyazaki. The internet over in Japan was lit ablaze last month by a student film. 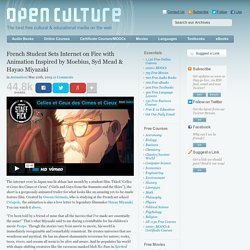 Titled “Celles et Ceux des Cimes et Cieux” (“Girls and Guys from the Summits and the Skies”), the short is a gorgeously animated trailer for what looks like an amazing yet-to-be-made feature film. Created by Gwenn Germain, who is studying at the French art school Créapole, the animation is also a love letter to legendary filmmaker Hayao Miyazaki. You can watch it above. Facebook. Embroidered Psychological Landscapes by Michelle Kingdom. 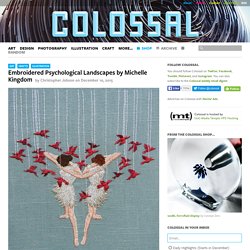 Brandalism: 82 Artists Install 600 Fake Ads Across Paris to Protest the COP21 Climate Conference. Just days before the start of the UN COP21 Climate Conference held in Paris and during the French state of emergency following terrorist attacks earlier this November, 600 posters were covertly distributed and hung within the city.

The posters were not taped to poles or distributed in public grounds, but secured behind glass at bus stops around the city. The large-scale posters were advertisement replacements, fake corporate ads designed by 82 artists across 19 countries to satirize messaging found throughout the Parisian streets. Organized by the Brandalism project, the citywide sweep is meant to challenge the corporate takeover of the Paris climate talks, forming ads that target the link between corporations’ advertising with consumerism, global warming, and fossil fuel consumption. The Painter's Primer: A Survival Kit - LINEA.

Stallman Artists Showcase A New Way To Use Canvas. SEPTEMBER 28, 2015 — By Laura Caseley Laura Caseley Laura Caseley is a New York-based writer, artist, and illustrator. When she's not writing and researching for ViralNova, you can find her working on an art project or enjoying a good cup of tea. Canvas has been used in painting and art-making for years. Typically, artists paint onto it, and the canvas usually just serves as the backdrop. The artist team refers to themselves as Stallman. Stallman takes strips of painted canvas and balances it on its edge, creating looping, swirling scrollwork that becomes an abstract image. The Painter's Primer: A Survival Kit - LINEA. Nawal El Saadawi: Women, Creativity & Mental Health - global-sisterhood-network.org.

Women Creativity and Mental Health By Nawal El Saadawi (Egypt) (2001) 1 - Undoing what education did to us: We are born creative. Living creatures are creative by nature because to survive they need creativity. To live as human beings, we need food and sex and good art. Those who are lucky and go to schools and universities are victims of what we call "fragmentation of knowledge". How to Get Yourself to Practice When You Don’t Feel Like It. 46 4Share Synopsis Not in the mood to practice or study? Humorous Street Signs and Other Contextual Street Art Interventions by Michael Pederson. Why You Do Your Best Thinking In The Shower: Creativity & the "Incubation Period"

Fossils from Everyday Life: Plaster Cast Plant Tiles by Rachel Dein. How Art Changes Consciousness. With so much talk about the evidence of the positive effects of yoga and meditation, you might be surprised at what scientific research also says about how art effects the brain. Long before modern neuroscience, artists were creating works to inspire people and today complex brain imaging scans can show us just how art changes the physiology of our brains. Contemplation, observing, and taking in beauty all stimulate pleasure centers within the brain while increasing blood flow by up to 10% in the medial orbitofrontal cortex.

The Neuroscience of Drumming: Researchers Discover the Secrets of Drumming & The Human Brain. How to access a million stunning, copyright-free antique illustrations released by the British Library. A 68 Hour Playlist of Shakespeare’s Plays Being Performed by Great Actors: Gielgud, McKellen & More. Hear All of Mozart in a Free 127-Hour Playlist. The Manipulated Female Body Explored by Taiwanese Photographer 3cm. Ruben Mandolini. TRAILER: Don't Stop The Music. Is That Not Worth exploring? MuseumofModernArt/collection. In “Notes from the Field,” Anna Deavere Smith asks us to end the “school-to-prison pipeline”

Artist Installs Flocks of Surveillance Cameras and Satellite Dishes in Outdoor Settings. New Ethereal Watercolor and Black Ink Cats That Fade into the Canvas by Endre Penovác. This Artist Creates Stunning Glass Sculptures Using Fibonacci Ratios. The German City of Karlsruhe Issued a Parking Ticket to a Warped Car Sculpture by Erwin Wurm. Freedom of Panorama is under attack. The Yaybahar: Man Invents The Coolest Acoustic Instrument In The World. Omer Fast. CNN Concatenated. Christian Marclay, The Clock. How To Be An Accidental Activist: Turning Bratz Dolls Into Wholesome Little Girls.

Satire. Parody. Fair use. Is it really OK to sell other people's Instagrams as art? Rare French paintings of Tasmanian Aboriginal life before colonisation to tour Australia. Bruce Shapiro’s Mesmerizing Kinetic Sand Drawing Machines. This Is How The Suicide Girls Responded When Art Show Sold Their Instagram Photos For $90,000. 271 Years Before Pantone, an Artist Mixed and Described Every Color Imaginable in an 800-Page Book. 7 tonnes 2 on Vimeo. These 30+ Street Art Images Testify Uncomfortable Truths.

Intimate Portraits of Artists and Their Cats Compiled by Alison Nastasi. Head Over Heels: An Oscar-Nominated Stop-Motion Short About the Struggles of an Upside Down Relationship. A Garden of Parallel Paths on Vimeo. An Embroidery of Voids: A Surreal Journey through Alleyways and Narrow Spaces by Daniel Crooks. You Are What You Listen To. Vibrations and the Law of Octaves. Hungarian Banknote Concept Designed by Barbara Bernát. 25 Trippy Optical Illusions. The Daily Routines of Famous Creative People. Beyond Discouragement - Creativity: How to Raise a Creative Child. Cosmic Australian Peacock Spider by WhittyKitty on DeviantArt.