Hypothermia Therapy & Birth Injuries. When a child is injured during or shortly after birth, treatment options for the injury depends on the specific type of injury and how severe the injury is. 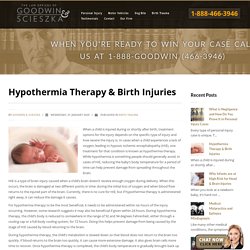 In cases when a child experiences a lack of oxygen, leading to hypoxic ischemic encephalopathy (HIE), one treatment for that condition is known as hypothermia therapy. While hypothermia is something people should generally avoid, in cases of HIE, reducing the baby’s body temperature for a period of time can help prevent damage from spreading throughout the brain. HIE is a type of brain injury caused when a child’s brain doesn’t receive enough oxygen during delivery. When this occurs, the brain is damaged at two different points in time: during the initial loss of oxygen and when blood flow returns to the injured part of the brain.

Currently, there is no cure for HIE, but if hypothermia therapy is administered right away, it can reduce the damage it causes. Birth Injury Treatment. This article has been fact checked by a Board Certified Pediatrician. 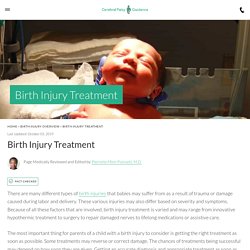 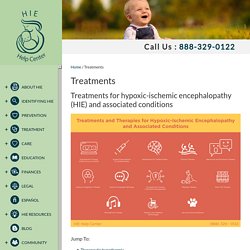 However there is one treatment, called therapeutic hypothermia, that can reduce the extent of permanent brain damage if given very shortly after birth or the oxygen-depriving incident. Most guidelines dictate that therapeutic hypothermia be given within six hours, although there may be some benefit up to 24 hours. Induction with Pitocin. Pitocin and the Risks of Birth Injuries. To induce labor or not to induce. 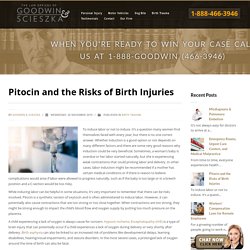 It’s a question many women find themselves faced with every year, but there is no one correct answer. Parents. What do you do if you won't go into labor or your labor has stalled? 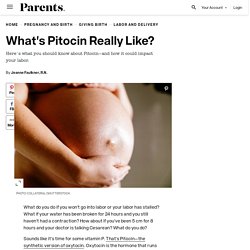 What if your water has been broken for 24 hours and you still haven't had a contraction? How about if you've been 5 cm for 8 hours and your doctor is talking Cesarean? What do you do? Sounds like it's time for some vitamin P. That's Pitocin—the synthetic version of oxytocin. The question is: How bad is pitocin? Head Injury in Children.

What is a head injury? 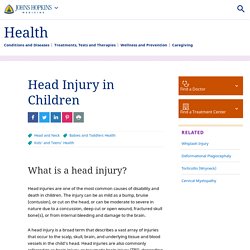 Head injuries are one of the most common causes of disability and death in children. The injury can be as mild as a bump, bruise (contusion), or cut on the head, or can be moderate to severe in nature due to a concussion, deep cut or open wound, fractured skull bone(s), or from internal bleeding and damage to the brain. A head injury is a broad term that describes a vast array of injuries that occur to the scalp, skull, brain, and underlying tissue and blood vessels in the child's head.

Head injuries are also commonly referred to as brain injury, or traumatic brain injury (TBI), depending on the extent of the head trauma. Newborn Skull Fractures: Causes, Symptoms & Long Term Effects. The skull of a newborn baby isn’t quite like the skull of an adult. 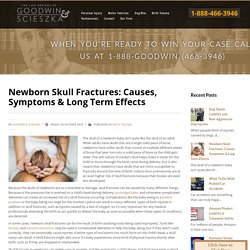 While adults have skulls that are a single solid piece of bone, newborns have softer skulls that consist of multiple different plates of bone that later turn into a solid piece of bone as the child gets older. The soft nature of a baby’s skull helps make it easier for the child to move through the birth canal during delivery, but it also means that newborns have skulls that are more susceptible to fractures around the time of birth. Infants born prematurely are at an even higher risk of skull fractures because their bodies are even less developed. Because the skulls of newborns are so vulnerable to damage, skull fractures can be caused by many different things. Understanding Skull Fracture (Child)

A skull fracture is a type of head injury. 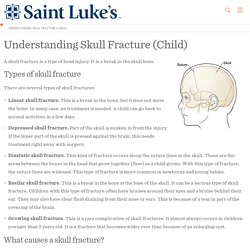 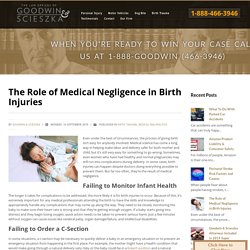 Medical science has come a long way in helping make labor and delivery safer for both mother and child, but it’s still very easy for something to go wrong. Sometimes, even women who have had healthy and normal pregnancies may still run into complications during delivery. In some cases, birth injuries can happen despite doctors doing everything possible to prevent them. But far too often, they’re the result of medical negligence. Failing to Monitor Infant Health The longer it takes for complications to be addressed, the more likely it is for birth injuries to occur.

Medical Negligence - Birth Injuries Caused by Negligence. Medical Negligence Explained Medical negligence occurs when medical professionals fail to meet the standard of care accepted by the medical community, resulting in injury or death to the patient. 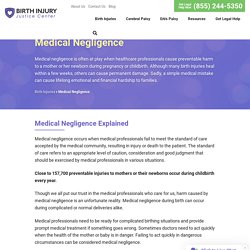 The standard of care refers to an appropriate level of caution, consideration and good judgment that should be exercised by medical professionals in various situations. Close to 157,700 preventable injuries to mothers or their newborns occur during childbirth every year. Though we all put our trust in the medical professionals who care for us, harm caused by medical negligence is an unfortunate reality. Medical Malpractice During Childbirth: Legal Overview.

When an injury occurs to an unborn baby and/or to the mother during labor or the delivery process, in many cases the harm may have been unavoidable under the circumstances. In other situations, the course of treatment chosen by the doctor may have been medically inappropriate, or the physician may have failed to use proper skill and care before or during childbirth. In this article, we'll focus on preventable injuries that occur during childbirth, and what a birth-related medical malpractice case might look like in these situations. Delivery Injuries Childbirth-related injuries can be incurred by the mother or by the newborn baby. In this section, we'll take a closer look at some of the more common injuries that affect newborns. Caput Succedaneum. What is a cephalohematoma, and is it dangerous for my baby? Causes & Treatment for Cephalohematoma in Newborns. The longer it takes to deliver a baby, the more likely it is complications will occur during the process.

Prolonged labor is related to many different types of birth injuries, such as injuries caused by a lack of oxygen, intracranial hemorrhage, and shoulder dystocia. Cephalohematoma is another type of birth injury that often occurs in complicated or prolonged deliveries. Cephalohematoma occurs in approximately 1% and 2% of all live births and often occurs in cases when the baby is too large to move through the birth canal, the baby is in an unusual position, multiple babies are being delivered, or labor becomes prolonged for another reason, such as weak contractions. Since birth-assisting tools like forceps and vacuums may be used in these sorts of situations to help deliver the baby, cephalohematoma can also be the result of those tools being used. Cephalohematoma occurs when blood vessels in the head are damaged, causing blood to collect between the child’s scalp and skull. Parents. Question My son was born with a cephalohematoma.

The doctor said it's most often seen with vacuum extraction, but I had a c-section. I would like to know when the lump on my son's head is likely to subside. Answer. Common Treatment Options for Birth Injuries. When an infant is injured during or shortly after delivery, it’s very important for treatment begin as quickly as possible. Every birth injury is unique and the type of treatment a child will need depends on the exact type of injury and how severe the injury is. However, there are many types of treatments that are widely used to treat birth injuries. Physical Therapy.

Cerebral Palsy Treatment - What Are the Options? - Cerebral Palsy Group. Pediatric Occupational Therapy. What To Do If a Doctor Drops Your Baby. Facebook-Baby-Dropped-On-Head-509433332. Louise Woodward case. The Louise Woodward case concerned Louise Woodward, a 19-year-old British au pair convicted in 1997 of the involuntary manslaughter of eight-month-old Matthew Eappen while he was in her care in his home in Newton, Massachusetts, in the United States. Background[edit] Five days after being admitted to Children's Hospital in Boston, Matthew Eappen fell into a coma and died on February 9, 1997, from a fractured skull and subdural hematoma.

He was also found to have a fractured wrist, an unnoticed and unexplained injury from a month earlier. Dr. Lois E.H. In a statement to the police, Woodward said that she "popped the baby on the bed". Woodward was arrested on February 5 and held for assault and battery initially, then murder when Matthew died. Media coverage of the case was intense, nowhere more so than in Britain. Trial[edit] The presiding judge was Hiller B. On 30 October 1997, after 26 hours of deliberations, the jury found her guilty of second-degree murder. Appeal[edit] Aftermath[edit] What is Caput Succedaneum and What Causes It? Being born isn’t easy and once a baby makes their entrance into the world, it’s very common for them to have some bruises or swelling. While it’s certainly alarming to see a newborn with bruising, in many cases, it’s simply the result of pressure from the birth canal or making contact with the mother’s pelvic bone and should clear up on its own over time. The University of Chicago.

Introduction Neonatal hematomas refer to a grouping of extracranial injuries that occur during delivery and are secondary to edema or bleeding into the varying locations within the scalp and skull. Caput Succedaneum. Nervous Caput. Cesarean Section and Birth Trauma. Pregnancy, birth, and the postpartum period are milestone events in the continuum of life. These experiences profoundly affect, women, babies, fathers, and families, and have important and long-lasting effects on society.

Cesarean Procedure: Risks & Complications for Mother & Baby. Cesarean Procedure: Risks & Complications for Mother & Baby A cesarean birth occurs through an incision in the abdominal wall and uterus rather than through the vagina. There has been a gradual increase in cesarean births over the past 30 years. In November of 2005, the Centers for Disease Control and Prevention (CDC) reported the national cesarean birth rate was the highest ever at 29.1%, which is over a quarter of all deliveries.