This is a small collection of profoundly cool things. It mostly spans _space / engineering / computer science but it could be anything that tickles my fancy.

Jack Sock's brilliant bit of sportsmanship. Grace Hopper - Nanoseconds. Juno Approach Movie of Jupiter and the Galilean Moons. SM64 - Watch for Rolling Rocks - 0.5x A Presses (Commentated) The First Linux Announcement from Linus Torvalds  Posted by Derek Hildreth in General » 29 Comments » Here’s the very first announcement from Linus Torvalds revealing an operating system called Linux that won’t be “big and professional like gnu” (see the mailing list thread here): From: torvalds@klaava.Helsinki.FI (Linus Benedict Torvalds) Newsgroups: comp.os.minix Subject: What would you like to see most in minix? 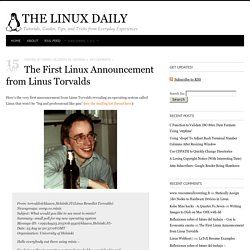 Summary: small poll for my new operating system Message-ID: <1991Aug25.205708.9541@klaava.Helsinki.FI> Date: 25 Aug 91 20:57:08 GMT Organization: University of HelsinkiHello everybody out there using minix –I’m doing a (free) operating system (just a hobby, won’t be big and professional like gnu) for 386(486) AT clones. This has been brewing since april, and is starting to get ready. It’s strange to think that it’s been that long now. Via (bandwidth has been exceeded, see cached page here instead). First-stage landing. Apollo 13, We Have a Solution. Kranz called Bob Heselmeyer on his loop. 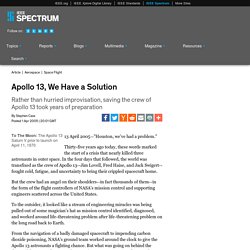 Heselmeyer sat two consoles over from Liebergot, and his job title was TELMU, which stood for Telemetery, Environmental, eLectrical, and extravehicular Mobility Unit. What that mouthful boils down to is that the TELMU was the equivalent of the EECOM for the lunar module, with the added responsibility of monitoring the astronaut's spacesuits. Like Liebergot, Heselmeyer had a posse of backroom guys--Bob Legler, Bill Reeves, Fred Frere and Hershel Perkins--and Kranz was about to hand them all a job.

"I want you to get some guys figuring out minimum power in the LM to sustain life," Kranz ordered Heselmeyer. Unfortunately, spaceships don't work like that. What Follows Is A Little Known story, even to many involved in the Apollo 13 mission. A fundamental problem stood in the way of getting the lunar module on line. With the last fuel cell running out of oxygen, the astronauts needed another way to get the lunar modules batteries on line, fast. The Sound of Two Black Holes Colliding. 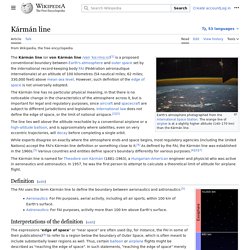 For the high-altitude region of Earth's atmosphere, see near space. For the boundary of the universe, see observable universe. Layers of Atmosphere.[1](not to scale) The Kármán line, or Karman line, lies at an altitude of 100 kilometres (62 mi) above the Earth's sea level, and commonly represents the boundary between the Earth's atmosphere and outer space.[2] This definition is accepted by the Fédération Aéronautique Internationale (FAI), which is an international standard-setting and record-keeping body for aeronautics and astronautics.

The line is named after Theodore von Kármán (1881–1963), a Hungarian-American engineer and physicist. [edit] Discover the cosmos!

Each day a different image or photograph of our fascinating universe is featured, along with a brief explanation written by a professional astronomer. 2006 August 24. 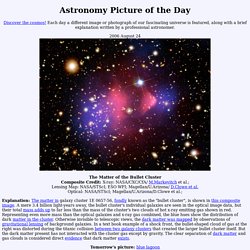