Digital, Social & Mobile in APAC in 2015. Social Media in Education: Resource Toolkit. Paul Clapton-Caputo sur Twitter : "#mindchange #decd meaningful use of #socialmedia activates my prefrontal lobe Baroness agreed argument is good. September 2014. Researcher apologizes for handling of Facebook emotion experiment. June 2014. Paul Clapton-Caputo on Twitter: #socialmedia #learning #digital #decd... Don’t Miss These Twitter and Facebook Guides. Whether you are teaching a class, helping a friend or just looking for information for yourself these guides from Mashable are a great resource. 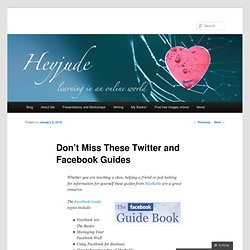 Hackofalltrades : The internet seems to like... Del Harvey: The strangeness of scale at Twitter. Big Data, Tattoos & Immortality: Juan Enriquez at TEDxSiliconAlley. The Innovation of Loneliness. Ianmullane : Understand how to use hashtags... Guymon-social-media-literacy-Thinkstock. Plus.google. Using Social Media to Teach Visual Literacy in the 21st Century Classroom. Increasingly, educators are acknowledging and welcoming the relative advantages of social media into the teaching and learning process. 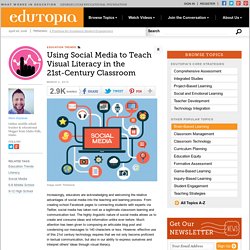 From creating school Facebook pages to connecting students with experts via Twitter, social media has taken root as a legitimate classroom learning and communication tool. The highly linguistic nature of social media allows us to create and consume ideas and information unlike ever before. Much attention has been given to composing an articulate blog post and condensing our messages to 140 characters or less. However, effective use of this 21st century technology requires that we not only become proficient in textual communication, but also in our ability to express ourselves and interpret others' ideas through visual literacy. Why Visual Literacy Matters Visual literacy is the ability to: Kevinmckeown : Great Infograph: what #social... Kevinmckeown : Do NOT seek to be a #celebrity... DECD Social Media. SOCIAL MEDIA EXPERIMENT. Resist the colour of Twitter? 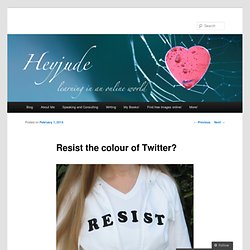 Others prefer to merge or integrate their professional and personal lives as a single ‘connected’ network. Yet in my experience, rather a lot more hardly make use of the affordances of technologies, and prefer to remain back in the 20th century. While I understand this when the choice is actively made based on knowledge of social media, I have run out of excuses to justify this position for educators at any time. In a technology-driven society, things change at a faster rate than ever before in history. We need to be connected. Do we really need connected educators?

Who educators connect with is a very critical consideration. A Quiet [Twitter] Protest “Don’t you think Findikli Stairs are just amazing? EricTTung: Does getting #SocialMedia posts... How Do I Use Grovo, Anyway? Online Training and Video Tutorials for Cloud Software. FinalYellow_SocialMediaReport_digital_screen.pdf. AUSTRALIAN FACEBOOK TRENDS 2012. Facebook has just released a cool app detailing events and general trends that occurred within the platform in 2012. 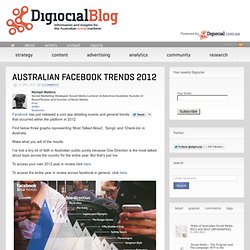 Find below three graphs representing ‘Most Talked About’, ‘Songs’ and ‘Check-ins’ in Australia. Make what you will of the results. I’ve lost a tiny bit of faith in Australian public purely because One Direction is the most talked about topic across the country for the entire year. But that’s just me. To access your own 2012 year in review click here. To access the entire year in review across facebook in general, click here. State of Australian Social Media 2012 (INFOGRAPHIC) The Teacher's Guide to Social Media. Education is a two-way street — oftentimes, those who teach could stand to learn a few things as well. 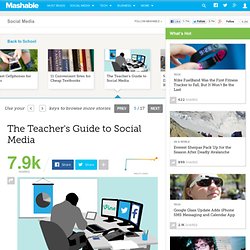 Social media, for one, is largely dominated by Generation Y. We invented it, we grew up with it and we know it like the back of our keyboard-ready hands. In some schools, tablets and social networks are becoming primary classroom tools. Even digitally versed teachers need to evolve with the language of their increasingly connected students. Don't sweat it. Are you an educator? 1. We've published plenty of horror stories about teachers who've posted NSFW content on their social profiles and have been summarily punished (see: the Aurora, Colo. teacher who tweeted half-naked photos of herself and joked about using drugs on school property). Whatever (legal things) you choose to do outside school is your business — just be sure to not give your colleagues (and students) a front-row seat. 2. Social Media in Australia Infographic. (1) Inequalities in Facebook use. Canonical correlation coefﬁcient c ), which is the correla-tion between the two latent variables. 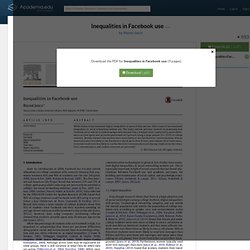 The canonical correla-tion coefﬁcient is calculated for each of the six functions.Because of scaling created by the standardized weights inthe equations calculating the latent variables, the value of this coefﬁcient can only range between 0 and 1 and there-fore is analogous to the statistic in a regression analysis.Consequently, the squared canonical correlation ) like in regression represents the proportion of the varianceshared between the two latent variables.

Represents the amount of shared variancebetween the variable sets.(2) (1) Inequalities in Facebook use.