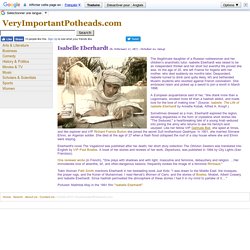 At the age of 20, she left France for Algeria with her mother, who died suddenly six months later. Despondent, Isabelle turned to drink (and quite likely, kif) and befriended Muslim students who revolted against French colonialism. She embraced Islam and picked up a sword to join a revolt in March 1898. A European acquaintance said of her, "she drank more than a Legionnaire, smoked more kif than a hashish addict, and made love for the love of making love. " (Source: Isabelle: The Life of Isabelle Eberhardt by Annette Kobak, Alfred A. Sometimes dressed as a man, Eberhardt explored the region, sending dispatches in the form of crystalline short stories like "The Seduced," a heartbreaking tale of a young Arab seduced into joining the army who returns to see his family's land usurped.

The Arrow of Time – Exactly What Is Time? Time appears to have a direction, to be inherently directional: the past lies behind us and is fixed and immutable, and accessible by memory or written documentation; the future, on the other hand, lies ahead and is not necessarily fixed, and, although we can perhaps predict it to some extent, we have no firm evidence or proof of it. 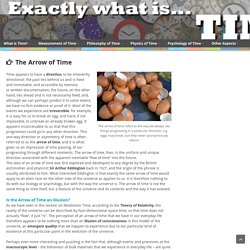 Most of the events we experience are irreversible: for example, it is easy for us to break an egg, and hard, if not impossible, to unbreak an already broken egg. It appears inconceivable to us that that this progression could go in any other direction. 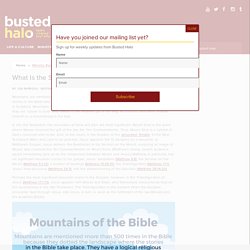 As a result, mountains and hills are mentioned more than 500 times in Scripture. Mountains have a logical religious symbolism for Jewish and Christian cultures since they are “closer to God” who dwells in the heavens (as in the sky). As a result, God often reveals himself on a mountaintop in the text. Social engineering; the art of human hacking, C... Philosophical Counseling Information. Entropy (arrow of time) Entropy is the only quantity in the physical sciences (apart from certain rare interactions in particle physics; see below) that requires a particular direction for time, sometimes called an arrow of time. 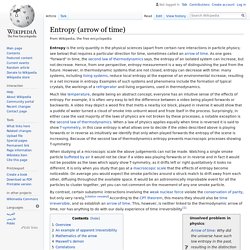 As one goes "forward" in time, the second law of thermodynamics says, the entropy of an isolated system can increase, but not decrease. Changing Places Extended Reading. 2 Futures Can Explain Time's Mysterious Past. Physicists have a problem with time. 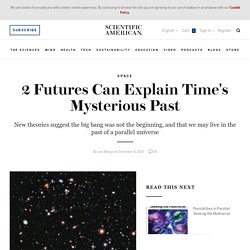 Whether through Newton’s gravitation, Maxwell’s electrodynamics, Einstein’s special and general relativity or quantum mechanics, all the equations that best describe our universe work perfectly if time flows forward or backward. Of course the world we experience is entirely different. The universe is expanding, not contracting.

Stars emit light rather than absorb it, and radioactive atoms decay rather than reassemble. Omelets don’t transform back to unbroken eggs and cigarettes never coalesce from smoke and ashes. Epigenetics in NOVA SCIENCE. The Missing Shade of Blue. The Missing Shade of Blue is an example introduced by the Scottish philosopher David Hume to show that it is at least conceivable that the mind can generate an idea without first being exposed to the relevant sensory experience. 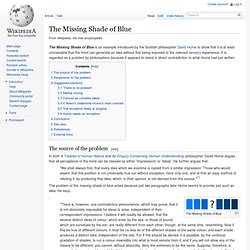 It is regarded as a problem by philosophers because it appears to stand in direct contradiction to what Hume had just written. The source of the problem[edit] In both A Treatise of Human Nature and An Enquiry Concerning Human Understanding, philosopher David Hume argues that all perceptions of the mind can be classed as either 'Impressions' or 'Ideas'. He further argues that: "We shall always find, that every idea which we examine is copied from a similar impression. The problem of the missing shade of blue arises because just two paragraphs later Hume seems to provide just such an idea.

The Missing Shade of Blue Responses to the problem[edit] Some philosophers take Hume to task for presenting such a clear counter-example and then dismissing it as insignificant. Wiki: Philosophy & Psychology. A Quantum Experiment Just Reversed The Thermodynamic Arrow Of Time. An international team of scientists was able to create a nifty quantum experiment that at first might appear to have broken thermodynamics: They were able to create a spontaneous heat flow from a cold system to a hot system. 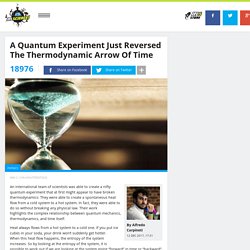 In fact, they were able to do so without breaking any physical law. Their work highlights the complex relationship between quantum mechanics, thermodynamics, and time itself. Heat always flows from a hot system to a cold one. If you put ice cubes in your soda, your drink won’t suddenly get hotter. Epigenetics: The Science of Change.