Dexmo: an exoskeleton for you to touch the digital world. IHMC Atlas Localization Test. Planning for Decentralized Control of Multiple Robots Under Uncertainty. Beautiful Fluid Actuators from Disney Research Make Soft, Safe Robot Arms. Roboticists have long been trying to build robot arms that are light, nimble, and safe to operate near people. 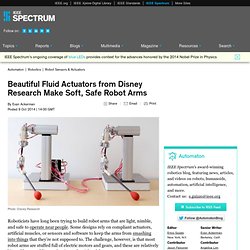 Some designs rely on compliant actuators, artificial muscles, or sensors and software to keep the arms from smashing into things that they’re not supposed to. The challenge, however, is that most robot arms are stuffed full of electric motors and gears, and these are relatively big and heavy, adding to the size and weight of the arms. Dynamic Vision Sensors Enable High-Speed Maneuvers With Robots. We love watching quadrotors pull off amazing high-speed, high-precision acrobatics as much as anyone. 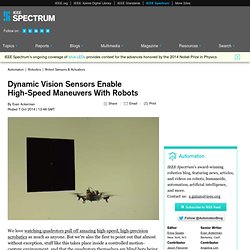 But we’re also the first to point out that almost without exception, stuff like this takes place inside a controlled motion-capture environment, and that the quadrotors themselves are blind bots being controlled entirely by a computer somewhere that’s viewing the entire scene at a crazy framerate and from all angles through an expensive camera setup. The Triple Delta Robot Arm (and Leg) By now you’d think we’ve seen just about every means of robotic actuator possible. 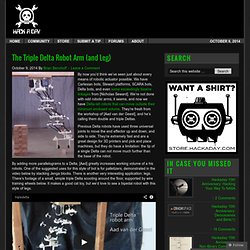 We have Cartesian bots, Stewart platforms, SCARA bots, Delta bots, and even some exceedingly bizarre linkages from [Nicholas Seward]. We’re not done with odd robotic arms, it seems, and now we have Delta-ish robots that can move outside their minimum enclosed volume. They’re fresh from the workshop of [Aad van der Geest], and he’s calling them double and triple Deltas. Previous Delta robots have used three universal joints to move the end effector up and down, and side to side. They’re extremely fast and are a great design for 3D printers and pick and place machines, but they do have a limitation: the tip of a single Delta can not move much further than the base of the robot.

Robot Octopus Takes to the Sea. Make It Wearable Finalists. MIT Robotic Cheetah. Untethered soft robot. Makeblock Self Balance Vehicle Can Deliver the Coffee. Programmable self-assembly in a thousand-robot swarm. Self-folding robots. Elon Musk warns us that human-level AI is ‘potentially more dangerous than nukes’ Elon Musk, the mastermind behind SpaceX and Tesla, believes that artificial intelligence is “potentially more dangerous than nukes,” imploring all of humankind “to be super careful with AI,” unless we want the ultimate fate of humanity to closely resemble Judgment Day from Terminator. 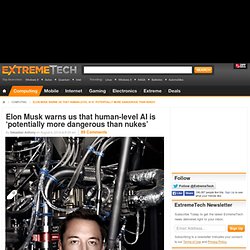 Personally I think Musk is being a little hyperbolic — after all, we’ve survived more than 60 years of the threat of thermonuclear mutually assured destruction — but still, it’s worth considering Musk’s words in greater detail. Musk made his comments on Twitter yesterday, after reading Superintelligence by Nick Bostrom. The book deals with the eventual creation of a machine intelligence (artificial general intelligence, AGI) that can rival the human brain, and our fate thereafter.

JIBO: The World's First Family Robot. MIT, DoD, and Google team up on Terminator-style liquid robots. What could go wrong? In “Terminator 2,” the T-1000 robotic assassin could transform its body into a silvery flowing liquid. 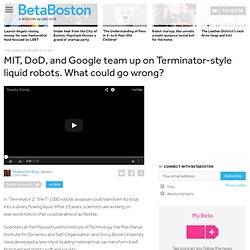 After 23 years, scientists are working on real-world robots that could be almost as flexible. Scientists at the Massachusetts Institute of Technology, the Max Planck Institute for Dynamics and Self-Organization, and Stony Brook University have developed a new robot-building material that can transform itself from hard and rigid to soft and squishy. The scientists are working on the project with the Defense Advanced Research Projects Agency, the US Defense Department’s high-tech toy shop, which gave birth to the Internet.

Also on the team is Boston Dynamics, the Waltham-based robot builder purchased last year by Internet search giant Google. So we’ve got the mightiest military on Earth, one of the planet’s richest tech companies, and a team of the world’s brightest scientists, all trying to build shape-shifting robots. 7 Finger Robot. Watch: These flying machines are getting better, faster, stronger. Raffaello D’Andrea (TED Talk: The astounding athletic power of quadcopters) stunned the audience with his super agile flying machines at TEDGlobal 2013. 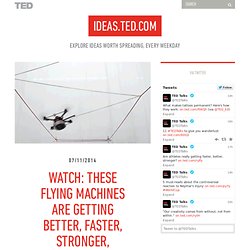 In a robot lab built on site, D’Andrea demoed tricks and feats to a hushed but delighted crowd, including a quadcopter that flew around the room with a glass of water perched on top, not spilling a drop. We caught up with D’Andrea to see what he and his tiny, powerful flying machines were up to. Below are three new applications his team has produced in the last year. Adaptive Route Following Using ICP. SCHAFT : DARPA Robotics Challenge 8 Tasks + Special Walking. The Robot Looks Awesome. Evolved Electrophysiological Soft Robots. Deformable Mobile Robot With Origami Wheels. KAIST Raptor robot runs at 46 km/h, Active tail stabilization. MIT's Shoulder-Mounted Robotic Arms.

When you watch too many Sci-Fi movies, you end up wanting cool things like robotic arms. 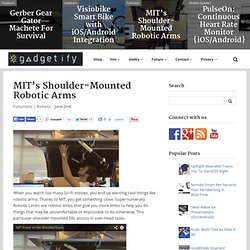 Thanks to MIT, you get something close. Announcing, 21st Century Robot "Jimmy"

Moveable and morphable: shape-changing robotic furniture forms future of urban living. Fusion energy could be the solution to all the world’s energy problems and help to power the world for the next 30 million years. 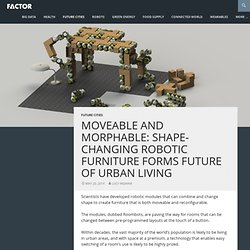 However to develop the solution we need to be able to work together and collaborate on the problem, a leading figure in the research has said. Professor Steve Cowley is the head of the Culham Centre for Fusion Energy, in the UK, which currently has two fusion reactors the European project JET and the UK-funded MAST. The centre has been a leading driver of fusion for the last 25 years and holds the world record for energy produced. Factor spoke to Cowley about what the future of fusion will look like. EPFL Robotic Arm Catches Objects You Throw At It Faster Than You Think. Meet OutRunner: The World's First Remotely Controlled Running Robot. MorpHex, the incredible hexapod robot ! TinkerBots Wants to Help Kids Make Colorful Robots That Learn (Video) TinkerBots, which makes a new product that one early kid tester described as “living Legos,” launches today. 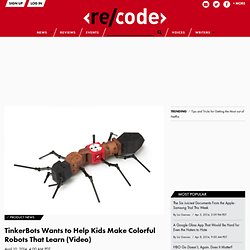 Based in Berlin, the programmable robot company is looking to raise $100,000 on Indiegogo. TinkerBots wants to make modular kits that help people build things like toy cars, dogs, ants, and other combinations of batteries, pivots, motors, sensors and non-electronic parts. It’s not cheap, but it’s not crazy expensive either — a basic TinkerBots kit will cost $159. Preorders are supposed to ship in December 2014 (but knowing how typical delays are for crowdfunding projects, I wouldn’t necessarily plan on having this ready for the holidays).

He was designed to save lives in disaster zones (like Fukushima). But while this Tin Man has a heart, he lacks a brain. In December, seven teams of scientists from top institutions, including MIT and Virginia Tech, will compete to code the bot for action. Each team will send its own Atlas into Darpa’s trials—eight tasks that will test his ability to navigate degraded terrain, drive a utility vehicle, and enter buildings.

“We designed Atlas to facilitate programming, but we expect Darpa to make the com­petition challenging,” says Marc Raibert, president of Boston Dynamics, Atlas’ maker. Atlas was designed to save lives in disaster zones. Courtesy of Boston Dynamics 1 // Vision Lidar, stereo cameras, and perception algorithms in Atlas’ head-mounted sensor package give him a wide field of view. 2 // Computer. Sergei Lupashin med sin Fotokite. British Army's Black Hornet Nano UAV. New Tab. JPL's Rock Climbing Robot. Flying insect-like robot Gimball can crash and recover. 31 October 2013Last updated at 10:20 ET By Tom Espiner Technology reporter Co-creator Adrien Briod said the Gimball was tested in a forest, where it collided with trees An insect-like flying rescue robot that can bounce off trees and buildings has been revealed by its creators. 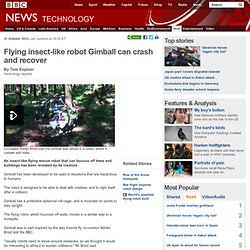 Gimball has been developed to be used in situations that are hazardous to humans. The robot is designed to be able to deal with crashes, and to right itself after a collision. Poppy Project. THOR: Tactical Hazardous Operations Robot. Watch: MIT's Self-Assembling Robots Offer Whiffs of Optimus Prime. Photo: M. Scott BrauerPhoto: M. Scott BrauerPhoto: Kyle GilpinPhoto: M. Atlas Update. Introducing WildCat. Ultra fast surface mount device positioning robot. Man walks with a robotic leg controlled by his brain. RepRap Simpson - Motion Test During Assembly. 10 Robots That Are Way More Athletic Than You. How the Tesla Model S is Made. Robot Revolution, will machines surpass humans (2013-05-04) Full HD 1080P. Meet the Teams: DARPA Robotics Challenge Track A Robots.

T8 - Robugtix™ Cheetah-Cub Is A Cat-Like Quadruped That’s The Fastest Bot Of Its Size. We’re still a ways away from electric sheep roaming the fields pretending to bleat but robotics researchers continue to look to nature for four-legged inspiration. Meet Cheetah-Cub, a European Commission-funded research project, out of Swiss University the École Polytechnique Federale De Lausanne‘s biorobotics lab, that’s about the size of a house cat.

As its name suggests, Cheetah-Cub takes its cues from feline morphology with strings replacing tendons and actuators sited in the legs to do the work of muscles. The result is a robot that runs like a cat and is, according to its inventor Alex Sproewitz, the fastest robot for its size (under 30kg). Robot Rodeo 2012 at Los Alamos National Laboratory. MINDWALKER Project Portal — mindwalker-project. Bimanual Dexterous Robotic Platform (Robo Sally) Leaping with RHex. Miniature curved artificial compound eye (CurvACE) A Robot Teaches Itself How to Walk. Tiny Robots Take Wing. Evolving Soft Robots with Multiple Materials (muscle, bone, etc.) Petman Tests Camo. Robot ants mimic insect behaviour. Virginia Tech: Autonomous Robotic Jellyfish.

Salamandra Robotica II Robot Walking and Swimming. NOVA science. Drone boat upgraded for Atlantic crossing. A year ago, Greg Holloway set out to build an ocean drone, based on the tiny Raspberry Pi $35 computer.Wired covered the start of the project, called FishPi, last summer, as Holloway was working on a Proof of Concept Vehicle (POCV), which at that time was essentially an upturned lunch container on the hull of a model ship.

Now that he’s approaching the one-year anniversary, the initial testing and research is paying off, and with collaborator Al Gray he’s revealing plans for the final design to the FishPi community. “When I began the project I had the optimistic expectation of being on the high seas by now,” says Holloway. “FishPi will cross the Atlantic, it might just take a bit longer than I expected!” What the FishPi looks like now. “The Proof-Of-Concept Vehicle (POCV) is finished, just about,” says Holloway. What the FishPi looked like in June.Meanwhile, Holloway has been working towards a design for the prototype. Most Human Like Robot Ever.

An Android You Can Make With A 3D Printer.

A new life for RCX 2.0. Minirccar. A few bumps in the road...continuing the Mini RC Car build. First I decided to get rid of the variable voltage regulator. It was causing all kinds of problems mostly because I'm using a 3.7v power source. Anyway the Arduino runs fine for now and I have some 3.3v regulators coming through mail pretty soon. YouTube. Robotank - project. The Robot Dragonfly. Medical. Ai. Whatever. Autonomous Christmas Lab.

Mind-controlled robotic arm achieves 'unprecedented performance' Scientists at the University of Pittsburgh have achieved an "unprecedented" amount of fine motor control from a robotic arm manipulated by the human brain.