The resolution of the Bitcoin experiment. DEVCON1: Ethereum for Dummies - Dr. Gavin Wood. State of the Onion Report - Google Slides. Alternative Blockchains (public) Alternative Blockchains (public) *For public blogging* Intro Block chains were invented specifically for the Bitcoin project but they can be applied anywhere a distributed consensus needs to be established in the presence of malicious or untrustworthy actors. 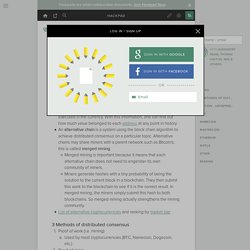 A block chain is a transaction database shared by all nodes participating in a system based on the Bitcoin protocol. A full copy of a currency's block chain contains every transaction ever executed in the currency. An alternative chain is a system using the block chain algorithm to achieve distributed consensus on a particular topic. Merged mining is important because it means that each alternative chain does not need to engender its own community of miners.

Miners generate hashes with a tiny probability of being the solution to the current block in a blockchain. 3 Methods of distributed consensus Proof of work (i.e. mining) Used by most cryptocurrencies (BTC, Namecoin, Dogecoin, etc.) 1 minute block generation times Created by Ripple. Bitcoin isn’t Money—It’s the Internet of Money. Ever since Paul Krugman started weighing in on Bitcoin recently, people have been using his notorious 1998 Internet prediction to mock him: By 2005 or so, it will become clear that the Internet’s impact on the economy has been no greater than the fax machine’s. 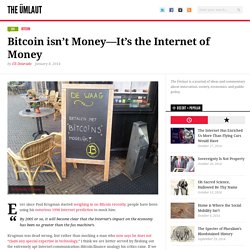 Krugman was dead wrong, but rather than mocking a man who now says he does not “claim any special expertise in technology,” I think we are better served by fleshing out the extremely apt Internet:communication::Bitcoin:finance analogy his critics raise. If we can see why Krugman might have thought that the Internet would not be significant, we might come to understand why many smart people think Bitcoin isn’t compelling and be able to explain why they’re wrong. The Internet is a telecommunication system, but it was not our first telecommunication system.

Telegraphs and telephones have been around for over a century. In contrast, the traditional telephone system defines its applications more centrally. Eris Industries Documentation. Blockchains have their origins in cryptocurrency platforms, in particular bitcoin, where they represent historical records of verifiable monetary stake. 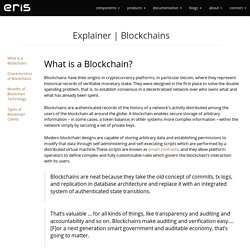 They were designed in the first place to solve the double spending problem, that is, to establish consensus in a decentralized network over who owns what and what has already been spent. Blockchains are authenticated records of the history of a network’s activity distributed among the users of the blockchain all around the globe. A blockchain enables secure storage of arbitrary information – in some cases, a token balance; in other systems more complex information – within the network simply by securing a set of private keys. Blockchains are neat because they take the old concept of commits, tx logs, and replication in database architecture and replace it with an integrated system of authenticated state transitions. That’s valuable … for all kinds of things, like transparency and auditing and accountability and so on. 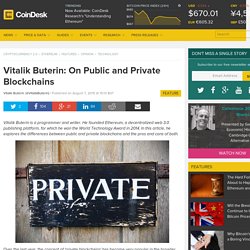 He founded Ethereum, a decentralized web 3.0 publishing platform, for which he won the World Technology Award in 2014. In this article, he explores the differences between public and private blockchains and the pros and cons of both. Over the last year, the concept of 'private blockchains' has become very popular in the broader blockchain technology discussion. Essentially, instead of having a fully public and uncontrolled network and state machine secured by cryptoeconomics (eg proof-of-work, proof-of-stake), it is also possible to create a system where access permissions are more tightly controlled, with rights to modify or even read the blockchain state restricted to a few users, while still maintaining many kinds of partial guarantees of authenticity and decentralization that blockchains provide.