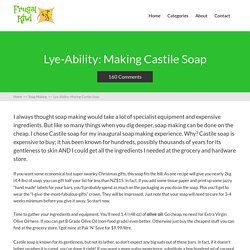 But like so many things when you dig deeper, soap making can be done on the cheap. I chose Castile soap for my inaugural soap making experience. Why? Castile soap is expensive to buy; it has been known for hundreds, possibly thousands of years for its gentleness to skin AND I could get all the ingredients I needed at the grocery and hardware store. If you want some economical but super swanky Christmas gifts, this soap fits the bill. Castile soap is known for its gentleness, but not its lather, so don’t expect any big suds out of these bars. You’ll also need 170g (6 oz) of lye aka caustic soda aka sodium hydroxide. Next you’ll need protective gear.

Because you are working with lye, this is absolutely, positively NOT a young kid-friendly activity. Finally you’ll need mould for you soap. If you want pictures of the process have a look at SoapChix’s 13 Steps to Cold-Processed Castile Soap. Olive Leaf Parasites and Cancer. Information About Herbs, Tea Combinations, Botanicals, Olive Leaf and Other Products is for general health and is compiled information of research from many sources. 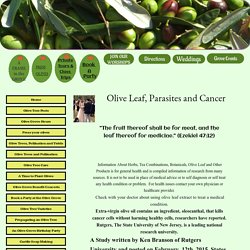 It is not to be used in place of medical advice or to self diagnosis or self treat any health condition or problem. For health issues contact your own physician or healthcare provider. Check with your doctor about using olive leaf extract to treat a medical condition. Olive Oil Equipment. Olive - Arbequina (Olea europaea) Harvest Curing in Large Jar. If you are considering growing backyard olives then the Arbequina variety is worth checking out! 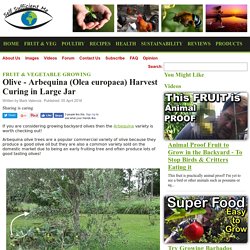 Arbequina olive trees are a popular commercial variety of olive because they produce a good olive oil but they are also a common variety sold on the domestic market due to being an early fruiting tree and often produce lots of good tasting olives! One of two Arbequina olive trees in my backyard. Behind this tree is the trunk of a much larger St Helena olive tree 7 years old but no fruit yet (image above) 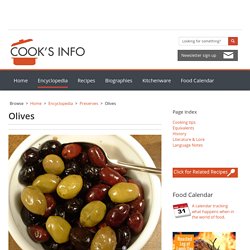 Seeds are planted, though, being cracked before planting to help them germinate. When seedlings grow up from them, they are either used as rootstock to which cuttings from other trees are grafted, or let grow and examined to see whether they might be a new variety which is worth developing. Olive trees are evergreens with pale grey bark and gnarled trunks. Olive trees can withstand some cold: in fact, they need some or they won't produce fruit.

Olive trees generally start to bear fruit at 5 years of age, though this can vary by cultivar. Harvesting in New World countries such as America, Australia and New Zealand is largely done with machine. In America, Olives are grown in California, and to a small extent in Arizona, New Mexico and Texas. 4 Ways to Cure Olives. User Reviewed Four Methods:Curing Olives in WaterCuring Olives in BrineDry Curing OlivesLye Curing OlivesCommunity Q&A Curing olives is an ancient process that turns the naturally bitter fruit into a deliciously salty, tart snack. 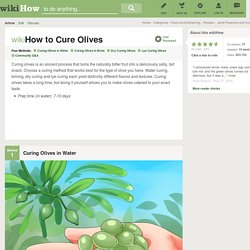 Choose a curing method that works best for the type of olive you have. How to Cure Black Olives. Making Lye-Cured Olives - Hunter Angler Gardener Cook. Lye. 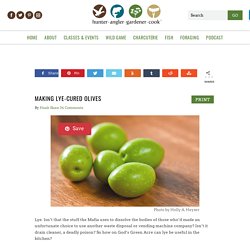 Isn’t that the stuff the Mafia uses to dissolve the bodies of those who’d made an unfortunate choice to use another waste disposal or vending machine company? Isn’t it drain cleaner, a deadly poison? So how on God’s Green Acre can lye be useful in the kitchen? Relax. How to Cure Green Olives at Home - Curing Green Olives. Year after year in my new home here in Northern California, I feel myself sinking down roots and developing new traditions. 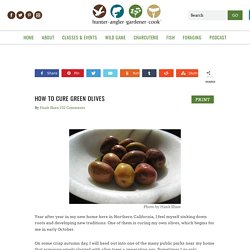 One of them is curing my own olives, which begins for me in early October. On some crisp autumn day, I will head out into one of the many public parks near my home that someone wisely planted with olive trees a generation ago. Sometimes I go solo, sometimes with friends. When I return, college football is in full swing, and I watch the games as I sort through my haul and prepare the brine. And after that first season, I’ve eaten a handful or two of last year’s olives as a snack while the work is progressing. How to Cure Green Olives at Home - Curing Green Olives. Olives. General & History Olives have been cultivated since before the dawn of history and were a critical crop to peoples all around the Mediterranean. 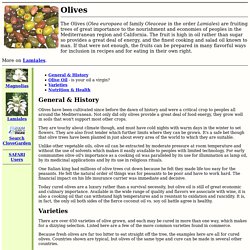 Not only did oily olives provide a great deal of food energy, they grow well in soils that won't support most other crops. They are touchy about climate though, and must have cold nights with warm days in the winter to set flowers. They are also frost tender which further limits where they can be grown. It's a safe bet though that olive trees have been planted in just about every area of the world to which they are suitable. Unlike other vegetable oils, olive oil can be extracted by moderate pressure at room temperature and without the use of solvents which makes it easily available to peoples with limited technology. One Italian king had millions of olive trees cut down because he felt they made life too easy for the peasants. THE TASTE TEST. A few weeks ago I wrote about the big, fat Spanish olives that I pick from my trees, put to soak until they are sweet, then cure in garlic-seasoned brine. 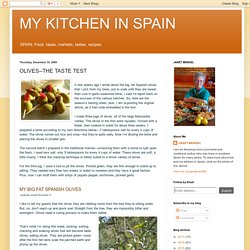 I said I’d report back on the success of the various batches. So, here are the season’s tasting notes, plus, I am re-posting the original article, as it had code embedded in the text. I made three jugs of olives, all of the large Manzanilla variety. Olives New Zealand BMP The Harvest.