Pirate Crafts, Coloring and Printables. Treasure Map. Tasha started kindergarten this year and has been in "craft overload" a bit so we don't do as many projects at home as we used to. 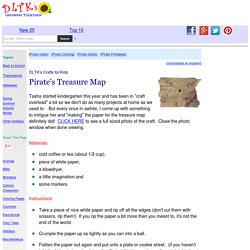 But every once in awhile, I come up with something to intrigue her and "making" the paper for the treasure map definitely did! CLICK HERE to see a full sized photo of the craft. Close the photo window when done viewing. Materials: cold coffee or tea (about 1/2 cup), piece of white paper, a blowdryer, a little imagination and some markers. Instructions: Take a piece of nice white paper and rip off all the edges (don't cut them with scissors, rip them!) Skull Paper Chain Craft. Free printable ESL activity with game templates, ideas for teaching; a communicative pair activity. Treasure Island is a little island of the coast of nowhere. 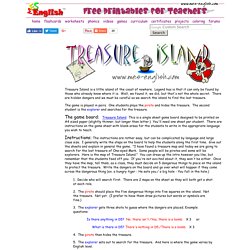 Legend has is that it can only be found by those who already know where it is. Well, we found it, we did, but that's not the whole secret. There are hidden dangers and we must be careful as we search the island to find the lost treasure. The game is played in pairs. One students plays the pirate and hides the treasure. The game board: Treasure Island This is a single sheet game board designed to be printed on A4 sized paper (slightly thinner, but longer than letter.)

Instructions: The instructions are rather easy, but can be complicated by language and large class size. The game is so simple in its set up, that there are all kinds of possibilities. To the teachers: The game takes about 40-50 minutes first time around with explanation. Instructions on the board: 1. 2. Is there anything in E4? 3. 4. I went to D4. Printable Treasure Map Kids Activity. It wasn’t too long ago that I saw a friend on Instagram share how she had spray painted some rocks gold and had her kids hunt for them. 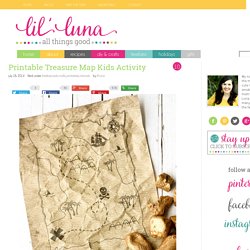 She said they loved it. I knew my kids would too, and decided I wanted to put together a little Pirate Map Scavenger Hunt for them (thanks for the idea, Cherish!!) I spent some time designing a Pirate Map and coming up with general clues I thought everyone would be able to use. Printable treasure maps for kids. Unlock you child’s imagination with these free printable treasure maps for kids. 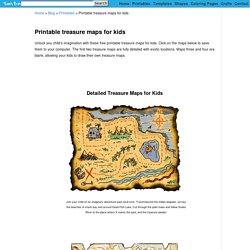 Click on the maps below to save them to your computer. The first two treasure maps are fully detailed with exotic locations. Maps three and four are blank, allowing your kids to draw their own treasure maps. Detailed Treasure Maps for Kids Join your child on an imaginary adventure past skull rock. Beware, ye who travel here! LearnEnglish Kids. Coolest Pirate Treasure Hunt Party Ideas and Photos. Pirate Treasure Hunt party ideas and photos submitted by: Janine This Treasure Hunt is taken from Janine's Pirate Birthday Party Tale For the treasure hunt I used colors for the clues. 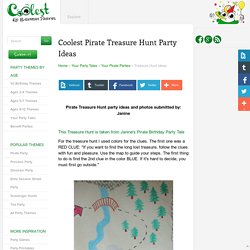 The first one was a RED CLUE: "If you want to find the long lost treasure, follow the clues with fun and pleasure. Use the map to guide your steps. The first thing to do is find the 2nd clue in the color BLUE. The Pirate treasure hunt continued, this led the children outside where I had taken blue plastic table clothes and cut out the shape of a stream and made a "bridge" out of cardboard which I laid out over the water. In this treasure hunt the GREEN CLUE was taped to one of my trees in the backyard: "Rain Rain go away, come back another day.

Coolest Pirate Games for a Pirate Theme Birthday Party. Many of the pirate games on this page have been graciously submitted by visitors like yourself. 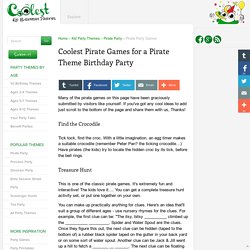 If you've got any cool ideas to add just scroll to the bottom of the page and share them with us, Thanks! Find the Crocodile Tick tock, find the croc. With a little imagination, an egg timer makes a suitable crocodile (remember Peter Pan? Treasure map. Learn how to talk like a pirate. Pirate Theme Learning Activities & Crafts. Pirates *Adventures to Experience Visit National Geographic pirates for a high seas adventure. 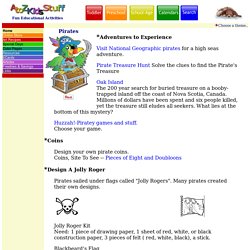 Pirate Treasure Hunt Solve the clues to find the Pirate's Treasure Oak Island The 200 year search for buried treasure on a booby-trapped island off the coast of Nova Scotia, Canada. Millions of dollars have been spent and six people killed, yet the treasure still eludes all seekers. What lies at the bottom of this mystery? *Coins Design your own pirate coins. *Design A Jolly Roger Pirates sailed under flags called "Jolly Rogers". *The Compass Make A Compass Need: 1 clear plastic cup, pencil, bar magnet, thread, needle or small nail, cork, water. *Sites To See Origins of the Compass Rose Learn the history of how the compass rose was developed to help with navigation, and learn about its 32 points. *Game *Make A Treasure Chest Need: you need a shoe box,colored paper(black, brown, yellow), glue, sissors Have the shoe box, glue, and paper ready. Pirate%20Story%20Making%20Cards.pdf. Free printable ESL activity with game templates, ideas for teaching; a communicative pair activity.