Investments: Orlando is the cat's whiskers of stock picking. The Observer's panel of stock-picking professionals has been undone in our 2012 investment challenge by a ginger feline called Orlando who spent time paw-ing over the FT. 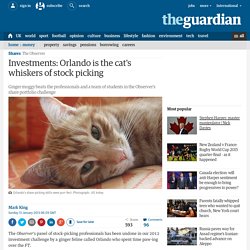 The Observer portfolio challenge pitted professionals Justin Urquhart Stewart of wealth managers Seven Investment Management, Paul Kavanagh of stockbrokers Killick & Co, and Schroders fund manager Andy Brough against students from John Warner School in Hoddesdon, Hertfordshire – and Orlando. Each team invested a notional £5,000 in five companies from the FTSE All-Share index at the start of the year. After every three months, they could exchange any stocks, replacing them with others from the index. By the end of September the professionals had generated £497 of profit compared with £292 managed by Orlando.

But an unexpected turnaround in the final quarter has resulted in the cat's portfolio increasing by an average of 4.2% to end the year at £5,542.60, compared with the professionals' £5,176.60. Eco-geeks hold open source alternative to UN climate talks. This December world leaders convene in Paris for COP21, their 21st attempt at curbing global climate change. 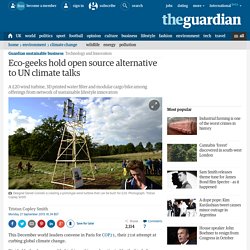 Divided by borders, assembled in hierarchies and motivated by the kind of competitive ideology shared by the neoliberal business class, this meeting embodies the self-interested conventions of the old world. Unsurprisingly, the context has resulted in a failure of shameful proportions. “For the 21st time, we don’t expect much,” says Dominic Wind, core organiser of POC21, a grassroots alternative to COP21 taking place near Paris. “Over the last 20 years, carbon dioxide emissions have doubled. Our trust in this institution is gone.” In reaction to the failure of COP21, POC21 has brought together a network of 100 plus designers, makers and eco-geeks to innovate a new breed of sustainable lifestyle products. “We need the tools to create different buying and consumption patterns,” Wind continues. The new ideas “The COP21 talks will not result in anything. No more patents.

Beyond capitalism and socialism: could a new economic approach save the planet? To avoid social, environmental and economic collapse, the world needs to move beyond the standard choices of capitalism or socialism.

That’s the conclusion of a new report released Wednesday by US think tank Capital Institute. The non-partisan think tank argues that both systems are unsustainable, even if flawlessly executed, and that economists need to look to the “hard science of holism” to debunk outdated views held by both the left and the right. The end of capitalism has begun. Why the music industry is fighting the wrong copyright battle. We all know that it’s possible to share books, CDs and mixtapes, pull them apart, or transfer them to different environments. 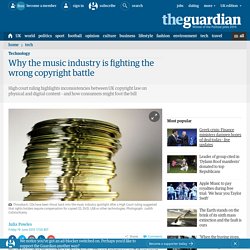 Their digital equivalents, however, are not so free. On Friday, the high court in London ruled that when you rip your lawfully owned CDs, transfer a DVD movie to a USB-only device, or backup your playlists, consumers are potentially “harming” rights holders. As a result, an eight-month-old legal provision allowing private copying for personal use has become potentially unlawful. It took until 2014 for the UK to have a private copying exception, legalising what everyone assumed to be possible: making copies of content you have legally bought for purposes such as backups, cloud storage and format-shifting.

But even then, the UK exception is ridiculously narrow. You are allowed to format-shift (for example, from a CD to an MP3). If this seems draconian, it just got worse: consumers may have to pay extra for this dismal private copying privilege too. The open source revolution is coming and it will conquer the 1% - ex CIA spy. Robert David Steele, former Marine, CIA case officer, and US co-founder of the US Marine Corps intelligence activity, is a man on a mission. 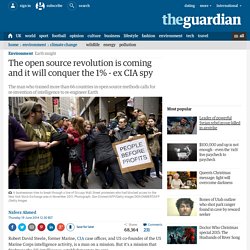 But it's a mission that frightens the US intelligence establishment to its core.With 18 years experience working across the US intelligence community, followed by 20 more years in commercial intelligence and training, Steele's exemplary career has spanned almost all areas of both the clandestine world. Steele started off as a Marine Corps infantry and intelligence officer. After four years on active duty, he joined the CIA for about a decade before co-founding the Marine Corps Intelligence Activity, where he was deputy director. Widely recognised as the leader of the Open Source Intelligence (OSINT) paradigm, Steele went on to write the handbooks on OSINT for NATO, the US Defense Intelligence Agency and the U.S. Special Operations Forces. But the CIA wasn't happy, and ensured that Steele was prohibited from running a second conference. Dr.

Related:  Red-Hot   -  New Economic system/trends and new paradigms   -  "Resistance is futile, you will be assimilated." So what?   -  L'Economie Politique   -  Capitalismo, liberalismo, neoliberismo, neoconservatorismo   -  Why or Why Not   -  Effetto risorse & collaterals   -  History   -  The end of capitalism has begun   -  Education   -  Enterprise