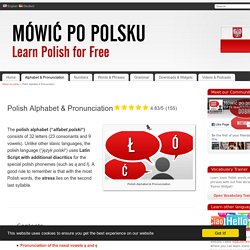 Unlike other slavic languages, the polish language (“język polski“) uses Latin Script with additional diacritics for the special polish phonemes (such as ą and ł). A good rule to remember is that with the most Polish words, the stress lies on the second last syllable. Polish Words, Phrases & Everyday Expressions. Polish Vocabulary, Questions, Phrases and Expressions Learn the most important words and phrases of the Polish language and listen to basic Polish conversations, questions and sentences! 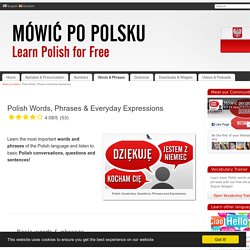 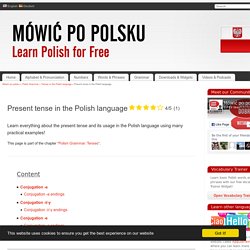 This page is part of the chapter “Polish Grammar: Tenses“. This article is under development. It may still contain presentational or spelling errors that will be resolved shortly. Present tense of verbs (czas teraźniejszy czasowników) The present tense in Polish refers, as well as in English and German languages, to the activity being held in current time. Present tense in the Polish language. 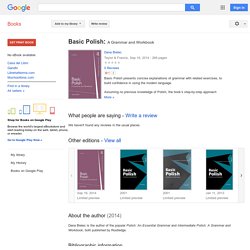 Assuming no previous knowledge of Polish, the book’s step-by-step approach guarantees a thorough grounding in the basics of grammar. Each of the forty units introduces particular grammar points. Clear and concise explanations are supported by a wide range of examples and exercises to allow students to practise and consolidate their learning. Later units also reinforce material taught in earlier ones. Key features include: Polish: A Comprehensive Grammar - Iwona Sadowska. Polish For Dummies - Daria Gabryanczyk. The ultimate quick and easy guide to learning Polish Polish can be a difficult language to master. 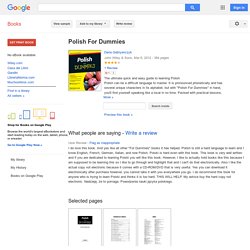 It is pronounced phonetically and has several unique characters in its alphabet, but with "Polish For Dummies" in hand, you'll find yourself speaking like a local in no time. Polish/Basic grammar. Perfective vs Imperfective[edit] Each Polish verb is either perfective or imperfective. 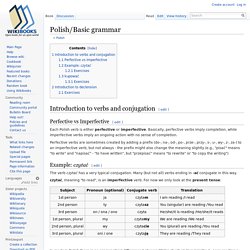 Learn Polish - Grammar. You can never understand one language until you understand at least two. 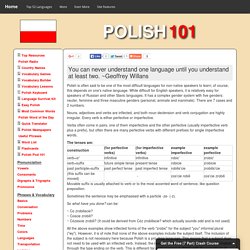 ~Geoffrey Willans Polish is often said to be one of the most difficult languages for non-native speakers to learn; of course, this depends on one's native language. While difficult for English speakers, it is relatively easy for speakers of Russian and other Slavic languages. It has a complex gender system with five genders: neuter, feminine and three masculine genders (personal, animate and inanimate). There are 7 cases and 2 numbers. Nouns, adjectives and verbs are inflected, and both noun declension and verb conjugation are highly irregular. Verbs often come in pairs, one of them imperfective and the other perfective (usually imperfective verb plus a prefix), but often there are many perfective verbs with different prefixes for single imperfective words. The tenses are: Verbs In Polish Conjugation. Polish Pronouns. Polish Pronouns If you're trying to learn Polish Pronouns you will find some useful resources including a course about Personal pronouns, indefinite pronouns, relative pronouns, reciprocal or reflexive pronouns... to help you with your Polish grammar. 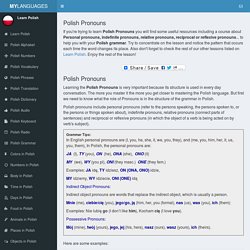 Try to concentrate on the lesson and notice the pattern that occurs each time the word changes its place. Also don't forget to check the rest of our other lessons listed on Learn Polish. Enjoy the rest of the lesson! Genitive Case. This is one of the more complex areas of Polish grammar. 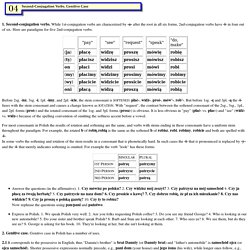 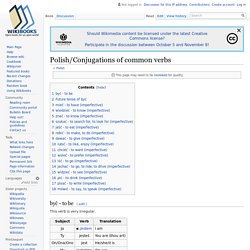 Polish language. “I hear hissing, rustling and hushing, and my ears are bleeding...” The Polish language is referred to as Polszczyzna (TPA/MPL: Pòlščŷz͆na; SPA/MPL: Polski) in Poland. Prolonged use of Polish causes tongue injuries, temporary loss of orientation, serious social withdrawal and/or general confusion leading to spontaneous boarding of unscheduled airline flights to some exotic locales where Polish has not made significant inroads (yet). History of Polish languageedit Nobody really knows who is responsible for the introduction of the Polish language to the Poles, or why this cruelty had been imposed on a generally peaceful population. There are unconfirmed rumors that the Poles invented the language themselves while trying to imitate the sounds of a tracksuit wiped on sand. Polish morphology. Regular alternation[edit] Nouns[edit] See also Nouns in the article on Polish grammar. Declensions are generally divided into hard and soft declensions.

Soft declensions are used when the stem of the noun ends in a soft (postalveolar or palatal-like) consonant in all forms, while hard declensions are used by nouns with stems ending in a hard consonant in some (but not necessarily all) forms. Some nouns follow the adjectival declension (see below), particularly if they are masculine nouns ending in -y/i. The following generalisations can be made for the inflection of all nouns: The nominative and vocative plural are always identical.For neuter nouns, the nominative, accusative and vocative are always identical in both singular and plural.The accusative of masculine nouns is identical to either the nominative or the genitive.The locative, dative and instrumental plural almost always have the same endings (-ach, -om, -ami) no matter how the noun is declined.

ADid You Know That ........? Polish Immigration. From the early 1800's to the beginning of World War II, approximately 5 million Polish immigrants came to the United States. Poland Jokes - Polish Jokes - Polack Jokes. Short Poland Jokes Q: Did you hear about the Polak who thought his wife was trying to kill him? Paul Kohler 'unrecognisable' from beating by Polish burglars asks 'why did you do it?'  Paul Kohler, 55, needed facial reconstruction surgery after raid in AugustGang burst into his £2m London home and attacked him in front of familyMariusz Tomaszewski, 32, Pawel Honc, 23, Oskar Pawlowichz, 29, and Dawid Tychon, 29, all admitted aggravated burglaryHonc and Tomaszewski also admitted causing grievous bodily harm and all four are being sentenced at Kingston Crown CourtEach gang member was let into UK despite long criminal records Professor Kohler said: 'We want to put this behind us and to do so successfully we need to understand why we were attacked' By Martin Robinson for MailOnline.

Did you know? - English - Polish Translation and Examples. Did you know? - English - Polish Translation and Examples.               Polish Language Online - Main Page. Polish grammar noun case endings tables 2. When to use biernik? When to use dope niacz... Narz dnik? Having a really hard time with Polish cases. Marek Activity: 4 / 867Joined: 15 Feb 2007 ♂ Hi, For my two zloty, i.e. euros, worth, cases in any language are not transparent in the beginning to intermediate stages (just try German, for instance, much less Finnish or Hungarian, with respectively 32 such cases, on for size!!!).

Attempt instead to learn them in context. I don't know either your Polish level or your instructor's method, but I dare say, that just drilling cases all class long, is clearly drudgery and NOT the best way to do things. In the long run too, it is mostly likely not the most productive. Admittedly, memorization/repetition, should be contextual, i.e. showing situations where, for example the instrumental vs. the dative case are used, rather than merely through dry charts or tables.

Marek. Polish language grammar books. Catsoldier Activity: 71 / 600Joined: 27 Sep 2009 ♂ Help with the Polish plurals and describing of objects? Maddieruby So, for the first poster. Welcome to my favorite part about Polish, the grammar! His and her (plural) Would this dictionary be of any help to me you can use the online version, quite useful: □ Learn Polish online - Free Polish lessons - Speak Polish.