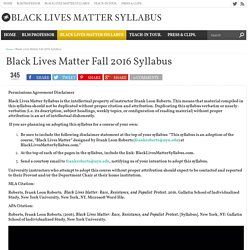 This means that material compiled in this syllabus should not be duplicated without proper citation and attribution. Duplicating this syllabus verbatim or nearly-verbatim (i.e. its description, subject headings, weekly topics, or configuration of reading material) without proper attribution is an act of intellectual dishonestly. Trump Syllabus 2.0. On June 19th, the Chronicle of Higher Education ran a web version of a mock college syllabus that sought to explore the deep historical and political roots of Donald Trump’s political success during the 2016 Presidential campaign. 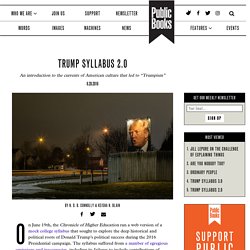 The syllabus suffered from a number of egregious omissions and inaccuracies, including its failures to include contributions of scholars of color and address the critical subjects of racism, sexism, and xenophobia on which Trump has built his candidacy. In May 2016, Donald Trump became the Republican Party’s presumptive nominee for President of the United States. Not since Barry Goldwater’s 1964 bid has a major political party produced so polarizing a candidate. Many, including Trump himself, attributed the campaign’s success to factors unique to Trump, like his wealth, his celebrity, and his professed aversion for “political correctness.” Trump’s political ascendancy came, however, as his personal fortunes did: through inheritance.

Secondary Readings. The Open Syllabus: A Practical Guide to Open Pedagogy in Your Course. Open pedagogy. Yesterday, thanks to authors Dawn Reed and Troy Hicks, we launched the sixth Marginal Syllabus monthly flash mob via our emerging model of public and collaborative web annotation-as-conversation. 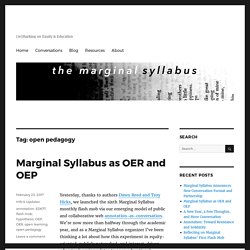 We’re now more than halfway through the academic year, and as a Marginal Syllabus organizer I’ve been thinking a lot about how this experiment in equity-oriented, publicly networked, and interest-driven educator learning relates to open educational resources (OER) and open educational practices (OEP). This post is a rough attempt to connect dots by addressing the following question: How are everyday digital spaces transformed into open learning environments, and what might this look like for educator learning?

My motivation to explore the Marginal Syllabus as both OER and OEP can be traced, most immediately, to a few influences. That “something new” was pairing both instructor facilitation and students’ social reading with participation in January’s Marginal Syllabus flash mob. How to get students to find and read 94 articles before the next class. My student-researchers and I tried something a little different to kick off our semester. 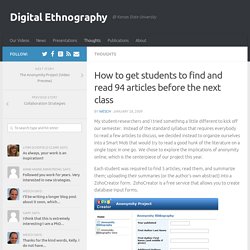 Instead of the standard syllabus that requires everybody to read a few articles to discuss, we decided instead to organize ourselves into a Smart Mob that would try to read a good hunk of the literature on a single topic in one go. How to Teach Kids About What's Happening in Ferguson - The Atlantic. When the unrest in Ferguson erupted, my husband made an observation that broke my heart: “The kids were supposed to start school today.” 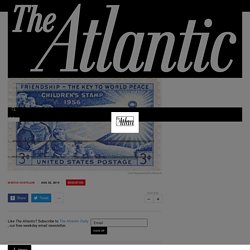 For me, the perfume of synthetic fibers and freshly sharpened pencils always signals the start of a new school year, and it makes me ecstatic. As a child, the ritual began with a trip to the uniform store. My older sister and I trekked onto Clark Street via a city bus. Hashtag #TrumpSyllabus2 sur Twitter. The Anonymity Project (Video Preview) After the 94 articles activity I reported about here 2 weeks ago, my research team (“students”) began crafting their research proposals. 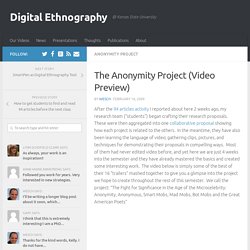 These were then aggregated into one collaborative proposal showing how each project is related to the others. In the meantime, they have also been learning the language of video; gathering clips, pictures, and techniques for demonstrating their proposals in compelling ways. Most of them had never edited video before, and yet here we are just 4 weeks into the semester and they have already mastered the basics and created some interesting work. The video below is simply some of the best of their 16 “trailers” mashed together to give you a glimpse into the project we hope to create throughout the rest of this semester. We call the project: “The Fight for Significance in the Age of the Microcelebrity: Anonymity, Anonymous, Smart Mobs, Mad Mobs, Bot Mobs and the Great American Poets”

Why and When Peer Grading is Effective for Open and Online Learning. Is peer grading an effective assessment method for open and online learning? 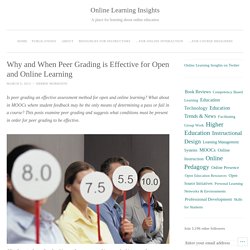 What about in MOOCs where student feedback may be the only means of determining a pass or fail in a course? This posts examine peer grading and suggests what conditions must be present in order for peer grading to be effective. After I wrote the outline for this post I came across this essay, by history professor Jonathon Rees, Why Peer Grading Can’t Work. The title was in stark contrast to my views on peer grading, but I incorporated Rees’ argument here as it is worth consideration. Rees is also author of a blog I follow, More or Less Bunk where he writes about current issues within Higher Education often with a slice of sarcasm. Past Present. Code Switch. Still Processing by The New York Times.