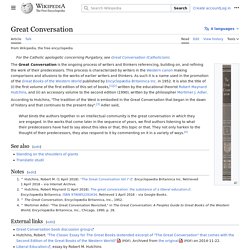 This process is characterized by writers in the Western canon making comparisons and allusions to the works of earlier writers. As such it is a name used in the promotion of the Great Books of the Western World published by Encyclopædia Britannica Inc. in 1952. It is also the title of (i) the first volume of the first edition of this set of books,[1][2] written by Robert Maynard Hutchins, and (ii) an accessory volume to the second edition (1990), written by Mortimer Adler. According to Hutchins, "The tradition of the West is embodied in the Great Conversation that began in the dawn of history and that continues to the present day".[3] Adler said, What binds the authors together in an intellectual community is the great conversation in which they are engaged. See also[edit] Notes[edit] ^ Hutchins, Robert M. (1 April 2018). 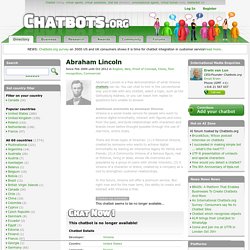 We hate spam, just as much as you do. What data does chatbots.org store? We’ll store all the details you enter on chatbots.org in our database and we maintain statistics of your visits with the sole reason to give you the best personalized service possible. How does chatbots.org store my data? Ep.4 Εμπεδοκλής - "Animated...Φιλόσοφοι" Official / Empedocles - "Animated Philosophers" Official. Chatbots.org - Virtual assistants, virtual agents, chat bots, conversational agents, chatterbots, chatbots: examples, companies, news,directory. Forest of illusion screen. A Syntopicon: An Index to The Great Ideas. Annoying computer. What Were Yahoo Chat Rooms Like? For beginners to Yahoo Chat, some of the internet's most popular free chat rooms could be a little difficult to navigate at first. 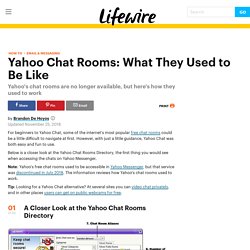 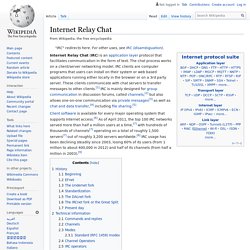 The chat process works on a client/server networking model. IRC clients are computer programs that users can install on their system or web based applications running either locally in the browser or on a 3rd party server. These clients communicate with chat servers to transfer messages to other clients.[1] IRC is mainly designed for group communication in discussion forums, called channels,[2] but also allows one-on-one communication via private messages[3] as well as chat and data transfer,[4] including file sharing.[5] History[edit] Beginning[edit] Σωκράτης - Animated Φιλόσοφοι- Who Was Socrates? – 8-Bit Philosophy. A Child Asks Holocaust Survivor Eva Schloss Questions. The Multiplayer Update! TaintedKrys. The Great Conversation by Robert Hutchins. 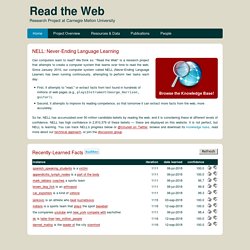 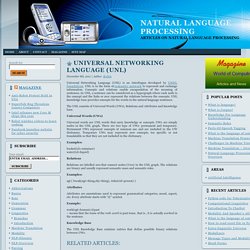 Universal Networking Language. We ask you, humbly, to help. 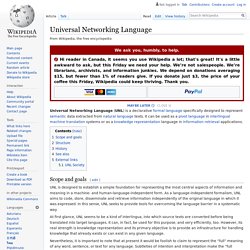 Hi reader in Canada, it seems you use Wikipedia a lot; that's great! It's a little awkward to ask, but this Friday we need your help. We’re not salespeople. We’re librarians, archivists, and information junkies. We depend on donations averaging $15, but fewer than 1% of readers give. Maybe later. Direct Memory Access Parsing (DMAP) A Direct Memory Access Parser reads text and identifies the concepts in memory that text refers to. 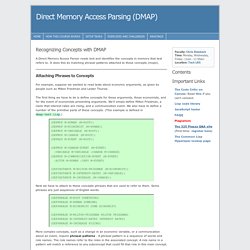 It does this by matching phrasal patterns attached to those concepts (mops). Attaching Phrases to Concepts For example, suppose we wanted to read texts about economic arguments, as given by people such as Milton Friedman and Lester Thurow. The first thing we have to do is define concepts for those arguments, those economists, and for the event of economists presenting arguments. We'll simply define Milton Friedman, a claim that interest rates are rising, and a communication event. Next we have to attach to these concepts phrases that are used to refer to them. 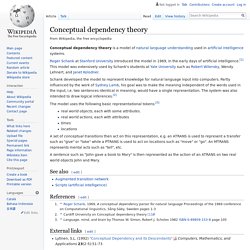 Roger Schank at Stanford University introduced the model in 1969, in the early days of artificial intelligence.[1] This model was extensively used by Schank's students at Yale University such as Robert Wilensky, Wendy Lehnert, and Janet Kolodner. Schank developed the model to represent knowledge for natural language input into computers. Case-Based Reasoning. Case-based reasoning is one of the fastest growing areas in the field of knowledge-based systems and this book, authored by a leader in the field, is the first comprehensive text on the subject. 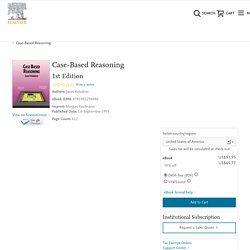 Case-based reasoning systems are systems that store information about situations in their memory. As new problems arise, similar situations are searched out to help solve these problems. Problems are understood and inferences are made by finding the closest cases in memory, comparing and contrasting the problem with those cases, making inferences based on those comparisons, and asking questions when inferences can't be made. The Process of Question Answering. Ions - Search all of the collections listed below at once. Technical Reports - Scientific and technical (S&T) reports conveying results of Defense-sponsored research, development, test and evaluation (RDT&E) efforts on a wide range of topics. Collection includes both citations and many full-text, downloadable documents from mid-1900s to present. AULIMP - Air University Library Index to Military Periodicals. Subject index to significant articles, news items, and editorials from military and aeronautical periodicals, with citations from 1988 to present.

In-Depth Understanding. This book describes a theory of memory representation, organization, and processing for understanding complex narrative texts. The theory is implemented as a computer program called BORIS which reads and answers questions about divorce, legal disputes, personal favors, and the like. Noet.com. Great Books of the Western World (60 vols.) Overview Imagine: the entirety of the Western canon at your fingertips. The makers of Encyclopaedia Britannica bring you the Great Books of the Western World. Comprising 60 volumes containing 517 works written by 130 authors, these texts capture the major ideas, stories, and discoveries that shaped Western culture.

The foundational library for a liberal arts education, the Great Books include works of literature, classics, mathematics and natural sciences, history and social sciences, philosophy and religion. Great Books of the Western World. The Great Books (second edition) Great Books of the Western World is a series of books originally published in the United States in 1952, by Encyclopædia Britannica, Inc., to present the Great Books in a 54-volume set. The original editors had three criteria for including a book in the series: the book must be relevant to contemporary matters, and not only important in its historical context; it must be rewarding to re-read; and it must be a part of "the great conversation about the great ideas", relevant to at least 25 of the 102 great ideas identified by the editors.

The books were not chosen on the basis of ethnic and cultural inclusiveness, historical influence, or the editors' agreement with the views expressed by the authors.[1] A second edition was published in 1990 in 60 volumes. Some translations were updated, some works were removed, and there were significant additions from the 20th century. History[edit] Volumes[edit] Volume 1[edit] Le free market est un endroit "i… 6 Pixel Art Drawing Techniques.