Did an Uncredited Woman Invent Breakfast Cereal? Our Home on the Hillside, Dansville, New York. 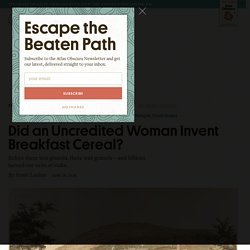 (Photo: Yale University Art Gallery/Public Domain) At Our Home on the Hillside, a 19th century sanitarium built in the tiny upstate hamlet of Dansville, New York, breakfast was at 8 a.m. It was only meal James Caleb Jackson, the head of Our Home, ate each day. It always included fruit but rarely vegetables, except in spring when he ate stalks of asparagus every day. He mostly ate breads and porridges, and above all other foods he worshipped flour made from wheat ground whole. For Jackson and his patients, “a desperate set” of people who had exhausted hope in mainstream medical care, meals were ideological affairs. Even as he became famous, a 19th century celebrity doctor, Jackson liked to emphasize how radical this idea was. When Jackson is mentioned at all today, it’s because he is credited with creating an entirely new way to eat wheat—as a cold breakfast cereal named Granula, invented in 1863. 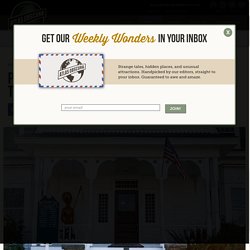 (All Photos: Kate Truisi) “Have you ever seen a UFO in the Pine Bush area?” The question is printed in large type, on paper that has been stuck on the walls of the Pine Bush barbershop. In red pencil, the word “you” has been underlined. It forms part of the UFO ephemera collected by Butch, the barber and local UFO historian. Pine Bush appears to have embraced this very distinct moniker. How did you hear about Pine Bush, the “UFO Capital of New York”?

Carousels. The Legacy Of George F. Johnson And The Square Deal. George F. 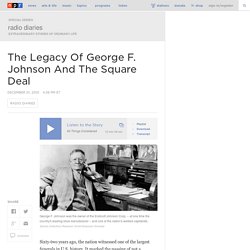 Johnson was the owner of the Endicott Johnson Corp. -- at one time the country's leading shoe manufacturer -- and one of the nation's welfare capitalists. Special Collections Research Center/Syracuse University. Johnny Hart. Biography[edit] Hart died of a stroke on April 7, 2007. 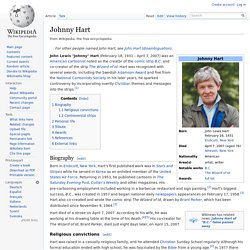 According to his wife, he was working at his drawing table at the time of his death.[4][5] His co-creator for The Wizard of Id, Brant Parker, died just eight days later, on April 15, 2007. Religious convictions[edit] Controversial strips[edit] Another B.C. strip, which ran November 10, 2003, showed an outhouse with a traditional crescent, which a character entered with a vertical graphic "SLAM", only to ask, "Is it just me, or does it stink in here? " Personal life[edit] Hart was an active member of his local community — the area of Greater Binghamton in Broome County, New York, which shares a common abbreviation of "B.C. 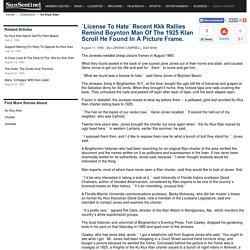 What they found sealed in the back of one scared Jane Jones out of their home and state, and caused Gene Jones to get out his rifle and wait for ``them`` to come and get him. ``What we found was a license to hate,`` said Gene Jones of Boynton Beach. The Chenango Kid: A Memoir of the Fifties - Roger K. Miller - Google Books. 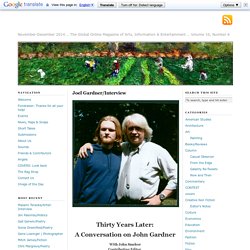 Poet, playwright, translator, medievalist, he is the author of such novels as Nickel Mountain, Mickelsson’s Ghosts, The Sunlight Dialogues, and October Light, which received the National Book Critics Circle Award in 1976. His Grendel, now a classic, is a magnificent retelling of Beowulf from the monster’s point of view. JS: I knew your father from our letters. JG: Dad was indeed a generous teacher. JS: In 2004, my book Without Reservation won the Milt Kessler Prize for a book of poetry published in a given year by an American poet over 40. JG: As long as you’ve been in Binghamton, you must have a lot of friends and colleagues who were also friends of my father, right?

JS: I’ve met Liz at a few readings, but as far as I know I’ve never met Susan or Bernie. I only knew Gardner from our letters. Joel and his ride.

The reds are popping this year. Award-Winning Pies in Naples, NY. Spiedies Recipe. 12 Reasons Why "The Rewrite" is the Ultimate Binghamton Movie. In an interview with Pipe Dream last May, noted filmmaker and Binghamton alumnus Marc Lawrence '81 described his upcoming rom-com, The Rewrite, as a “love letter to Binghamton.” 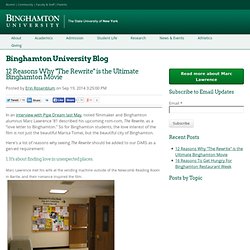 So for Binghamton students, the love interest of the film is not just the beautiful Marisa Tomei, but the beautiful city of Binghamton. Here's a list of reasons why seeing The Rewrite should be added to our DARS as a gen-ed requirement: 1. It's about finding love in unexpected places. Marc Lawrence met his wife at the vending machine outside of the Newcomb Reading Room in Bartle, and their romance inspired the film. 2. The only thing missing from this shot is the Pegasus statue. 3.

How many college students can say their drive to school is in a major motion picture? 4. Baxter's ears can be seen behind Tomei in this scene from the trailer. 5. . (...and maybe even eaten). 6. Because we could all use another Binghamton hoodie.