Five hundred new fairytales discovered in Germany. Arthur Machen. Arthur Machen (/ˈmækən/; 3 March 1863 – 15 December 1947) was a Welsh author and mystic of the 1890s and early 20th century. He is best known for his influential supernatural, fantasy, and horror fiction. His novella "The Great God Pan" (1890; 1894) has garnered a reputation as a classic of horror (Stephen King has called it "Maybe the best [horror story] in the English language"[1]). He is also well known for his leading role in creating the legend of the Angels of Mons. Biography[edit] Early years[edit] E. B. White on Why Brevity Is Not the Gold Standard for Style. By Maria Popova “Writing is not an exercise in excision, it’s a journey into sound.” 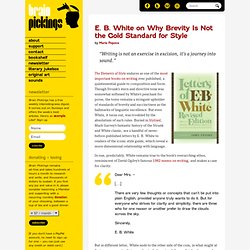 The Elements of Style endures as one of the most important books on writing ever published, a quintessential guide to composition and form. Italo Svevo. Aron Ettore Schmitz (December 19, 1861 – September 13, 1928), better known by the pseudonym Italo Svevo, was an Italian writer and businessman, known as a novelist, playwright, and short story writer. 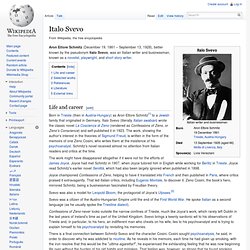 Life and career[edit] Born in Trieste (then in Austria-Hungary) as Aron Ettore Schmitz[1] to a Jewish family that originated in Germany, Italo Svevo (literally Italian swabian) wrote the classic novel La Coscienza di Zeno (rendered as Confessions of Zeno, or Zeno's Conscience) and self-published it in 1923. The work, showing the author's interest in the theories of Sigmund Freud, is written in the form of the memoirs of one Zeno Cosini, who writes them at the insistence of his psychoanalyst. Schmitz's novel received almost no attention from Italian readers and critics at the time. (un)justly (un)read. Dashboard? More Like Bookshelf: Your Guide to Literary Tumblrs. By Nick Moran posted at 6:00 am on February 3, 2012 96. 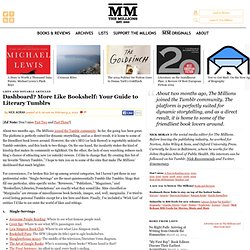 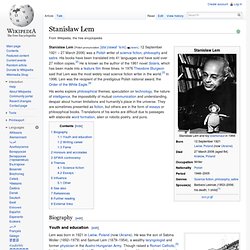 They are sometimes presented as fiction, but others are in the form of essays or philosophical books. Translations of his works are difficult due to passages with elaborate word formation, alien or robotic poetry, and puns. Biography[edit] Youth and education[edit] James Branch Cabell. James Branch Cabell (/ˈkæbəl/; April 14, 1879 – May 5, 1958) was an American author of fantasy fiction and belles lettres. 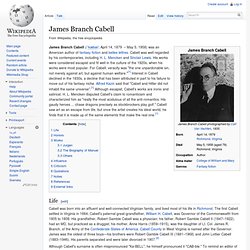 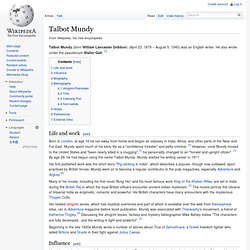 He also wrote under the pseudonym Walter Galt. [1] Life and work[edit] Maus. In the frame tale timeline in the narrative present, beginning in 1978 in the Rego Park section of New York City, Spiegelman talks with his father about his Holocaust experiences, gathering material for the Maus project he is preparing. 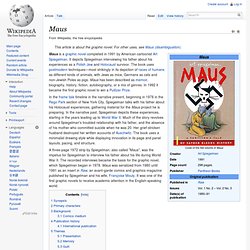 In the narrative past, Spiegelman depicts these experiences, starting in the years leading up to World War II. Much of the story revolves around Spiegelman's troubled relationship with his father, and the absence of his mother who committed suicide when he was 20. Her grief-stricken husband destroyed her written accounts of Auschwitz. The book uses a minimalist drawing style while displaying innovation in its page and panel layouts, pacing, and structure. Synopsis[edit] Palestine (comics) Palestine is a graphic novel written and drawn by Joe Sacco about his experiences in the West Bank and the Gaza Strip in December 1991 and January 1992. 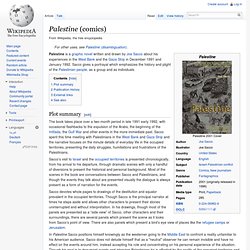 Sacco gives a portrayal which emphasizes the history and plight of the Palestinian people, as a group and as individuals. The book takes place over a two-month period in late 1991 early 1992, with occasional flashbacks to the expulsion of the Arabs, the beginning of the Intifada, the Gulf War and other events in the more immediate past. Sacco spent this time meeting with Palestinians in the West Bank and Gaza Strip and the narrative focuses on the minute details of everyday life in the occupied territories, presenting the daily struggles, humiliations and frustrations of the Palestinians.

Sacco’s visit to Israel and the occupied territories is presented chronologically, from his arrival to his departure, through dramatic scenes with only a handful of diversions to present the historical and personal background. Barefoot Gen. Barefoot Gen (はだしのゲン, Hadashi no Gen?) 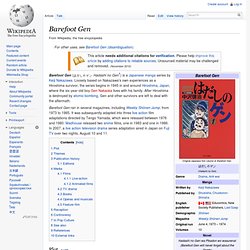 Is a Japanese manga series by Keiji Nakazawa. Loosely based on Nakazawa's own experiences as a Hiroshima survivor, the series begins in 1945 in and around Hiroshima, Japan, where the six-year-old boy Gen Nakaoka lives with his family. After Hiroshima is destroyed by atomic bombing, Gen and other survivors are left to deal with the aftermath.

Plot[edit] The story begins in Hiroshima during the final months of World War II. Joe Sacco. Biography[edit] Sacco earned his B.A. in journalism from the University of Oregon in 1981 in three years. 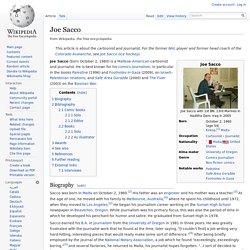 Wired 1.04: Disneyland with the Death Penalty. Disneyland with the Death Penalty We sent William Gibson to Singapore to see whether that clean dystopia represents our techno future. By William Gibson "It's like an entire country run by Jeffrey Katzenberg," the producer had said, "under the motto 'Be happy or I'll kill you.'" We were sitting in an office a block from Rodeo Drive, on large black furniture leased with Japanese venture capital.

Now that I'm actually here, the Disneyland metaphor is proving impossible to shake. Was it Laurie Anderson who said that VR would never look real until they learned how to put some dirt in it? The cab driver warned me about littering. He asked if it was clean there. Satori in the Dust Bowl: A Review of Seed by Rob Ziegler. About a century from now, climate change has caused a new Dust Bowl in the Corn Belt, resulting in major famine across the United States.

Most of the surviving population leads a nomadic existence, migrating across the ravaged landscape in search of habitable, arable land. Decades of war, resource depletion and population decline have left the government practically powerless. Gangs and warlords rule the land. The only thing staving off full-blown starvation is Satori, a hive-like living city that produces genetically engineered drought-tolerant seed. Windupstories.com – fiction by paolo bacigalupi. Stories. Soft Apocalypse by Will McIntosh I passed a lithe cormorant of a woman trying on gas masks at a street kiosk. Night Shade Books: Dempsey, Michael - Necropolis. World War II Survivor Stirs Literary World With 'Outrage' The Better Angels of Our Nature by Steven Pinker - review. A peaceable response to violence: memorial for the victims of the shooting on Utoya island in July 2011. Photograph: Fabrizio Bensch/REUTERS. 9 Essential Geek Books You Must Read Right Now.

7 Must-Read Books on Time. By Maria Popova. Taylor mali poem. Tomas Tranströmer: What Should I Read First? Photo by JESSICA GOW/AFP/Getty Images. Go the fuck to sleep werner herzog. 10 New Must-Reads for September. 10 Novels That We Dare You to Finish. 10 Contemporary South Asian Writers You Should Know. What did you really read this summer? - Summer reading. Guardian First Book Award: the longlist 2011. 6 Things I Learned from Charles Bukowski Altucher Confidential. Posted by James Altucher. “Why’s This So Good?” No. 15: Michael Lewis’ Greek odyssey. By David Dobbs | October 11, 2011. Cormac McCarthy. Writing career[edit] 33 Unusual Tips to Being a Better Writer Altucher Confidential.

Back in college, Sanket and I would hang out in bars and try to talk to women but I was horrible at it. Nobody would talk to me for more than thirty seconds and every woman would laugh at all his jokes for what seemed like hours. Even decades later I think they are still laughing at his jokes. Miranda July. Background[edit] Raymond Carver. Ariel S. Leve. Denis Johnson. John Fante. Maxim Gorky. Knut Hamsun. A “richly painted literary novel ... a deeply satisfying tale mixing history, cultural clashes, violence and love.” A Visit From the Goon Squad. The Orchid Thief. Southern Enlightenment. The Kerouac School Of Disembodied Poetics. Hunter S. Thompson Essay. “Open Letter To The Youth Of Our Nation” 1955 « Hunter S. Thompson Books.