In the meantime, in between time, ain't we got fun? 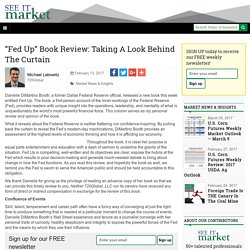 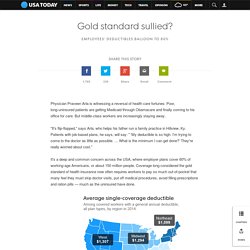 Employees' deductibles balloon to 80% Physician Praveen Arla is witnessing a reversal of health care fortunes: Poor, long-uninsured patients are getting Medicaid through Obamacare and finally coming to his office for care. But middle-class workers are increasingly staying away. If You've Ever Been A Server In America… THIS. Last night, a friend on Facebook messaged me the above editorial. 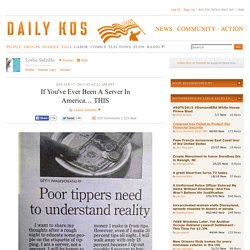 I'm finding it hits home, not only for me, but also for anyone who has held a serving position in this country. Because the image may be difficult to read, here is the text: Poor Tippers Need To Understand RealityI want to share my thoughts after a rough night, to educate some people on the etiquette of tipping. I am a server, not a servant. I will be happy to get you what you need to make your dining experience great, but I will not be disrespected. Thank you, Courtney Stansell. Many are shocked to discover the majority of American servers are making $2.13 per hour base pay. Why Airlines Collude To Make Flying As Miserable As Possible. Few experiences are as universal to Americans as the shared degradation and misery of flying on our nation's air carriers. 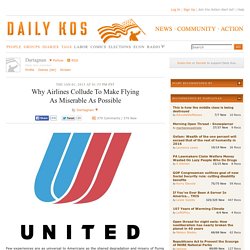 These corporate behemoths have somehow managed to wrap up everything wrong with this country and present it to us as a package deal: income inequality, corporate indifference, dwindling services, automation and skyrocketing prices all combined to make flying a tortuous chore rather than a pleasure, particularly in the last ten years. It's no different than fiscal austerity, really--just a calculated effort to push the limits of greed for a tiny minority to the point where Americans won't tolerate any more, then convincing us that such a drastically diminished quality of life is the "new normal.

" And Americans continue to suffer it, because in most cases they feel they have to. For many, travel is a necessity for their livelihood. For others with scattered families travel is the only way to maintain personal connections. Better-insurance-against-inequality. Economic View By ROBERT J. 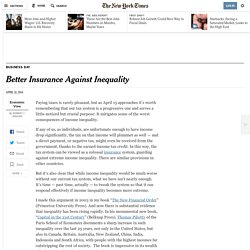 SHILLER Paying taxes is rarely pleasant, but as April 15 approaches it’s worth remembering that our tax system is a progressive one and serves a little-noticed but crucial purpose: It mitigates some of the worst consequences of income inequality. If any of us, as individuals, are unfortunate enough to have income drop significantly, the tax on that income will plummet as well — and a direct payment, or negative tax, might even be received from the government, thanks to the earned-income tax credit. In this way, the tax system can be viewed as a colossal system, guarding against extreme income inequality. But it’s also clear that while income inequality would be much worse without our current tax system, what we have isn’t nearly enough. Great Problems: The Rent-seeking Economy. In a healthy society, people acquire wealth by making stuff people want. 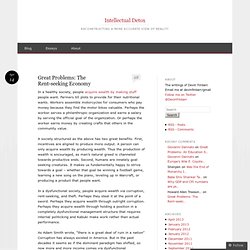 Farmers till plots to provide for their nutritional wants. Workers assemble motorcycles for consumers who pay money because they find the motor bikes valuable. Perhaps the worker serves a philanthropic organization and earns a salary by serving the official goal of the organization. Or perhaps the worker earns money by creating crafts that others in the community value. A society structured as the above has two great benefits. Was America’s Economic Prosperity Just a Historical Accident? The New Gilded Age. A recent article in Salon neatly describes how the current era of U.S. history mirrors the Robber Baron era of the late 1800s-early 1900s, also known as the Gilded Age. 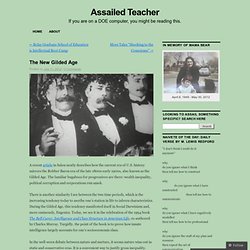 The familiar bugaboos for progressives are there: wealth inequality, political corruption and corporations run amok. There is another similarity I see between the two time periods, which is the increasing tendency today to ascribe one’s station in life to inborn characteristics.

Radical new economic system will emerge from collapse of capitalism. At the very moment of its ultimate triumph, capitalism will experience the most exquisite of deaths. 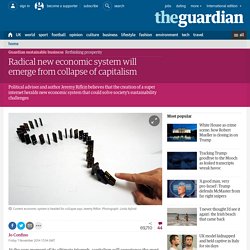 This is the belief of political adviser and author Jeremy Rifkin, who argues the current economic system has become so successful at lowering the costs of production that it has created the very conditions for the destruction of the traditional vertically integrated corporation. Rifkin, who has advised the European Commission, the European Parliament and heads of state, including German chancellor Angela Merkel, says: No one in their wildest imagination, including economists and business people, ever imagined the possibility of a technology revolution so extreme in its productivity that it could actually reduce marginal costs to near zero, making products nearly free, abundant and absolutely no longer subject to market forces. Decline and fall: how American society unravelled. In or around 1978, America's character changed.

For almost half a century, the United States had been a relatively egalitarian, secure, middle-class democracy, with structures in place that supported the aspirations of ordinary people. 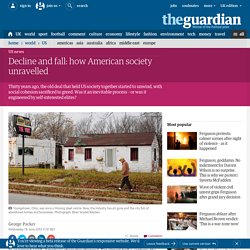