7 Weird Remedies For Anxiety That Actually Work. How to Turn off These 6 Common, Toxic Thoughts. Whenever I'm speaking on a panel, there's one question people tend to ask: "How do you let go of work? 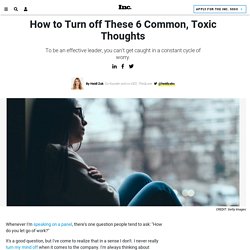 " I Lost My Job and My Husband. Then I Found Newfoundland. Photo This is the fourth installment of a series of articles devoted to summer vacations that had an enduring impact on a writer’s life. 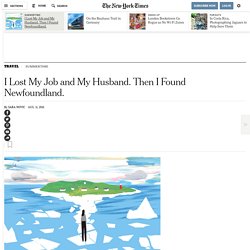 Earlier contributors include Francine Prose, Dominique Browning and Jacqueline Woodson. During my summer break from the M.F.A. program at Columbia University in New York, I found myself amid my first adult crisis. ‘Quirkyalone’ Is Still Alone. Photo Lately I’ve been having a lot of conversations with friends who find themselves still single in their 30s and 40s and are starting to worry that it’s not those swinish men/crazy women or New York City’s cruelly Darwinian dating scene or bad luck. 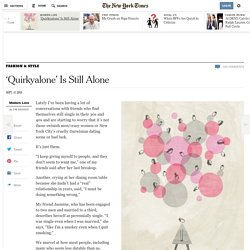 Brené Brown on what people who rise strong from their facedown moments have in common, Grace Paley on the art of growing older, and more. Hello, Peggy Fleming! 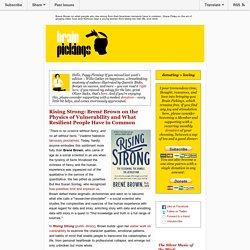 If you missed last week's edition – Willa Cather on happiness, a breathtaking anatomy of sadness illustrated by Quentin Blake, Borges on success, and more – you can read it right here; if you missed my eulogy for the late, great Oliver Sacks, that's here. And if you're enjoying this, please consider supporting with a modest donation – every little bit helps, and comes enormously appreciated. How to Make Difficult Conversations Easy: 7 Steps From a Clinical Psychologist. Someone is screaming in your face at the top of their lungs. 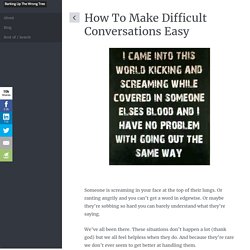 10 Clever Tricks to Trigger Positive Emotions. People who see the glass half-full are certainly happier than the pessimists of the world, and learning to think positively is worthwhile. 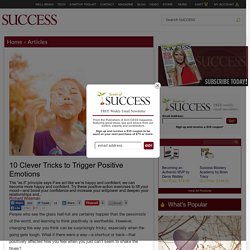 However, changing the way you think can be surprisingly tricky, especially when the going gets tough. What if there were a way—a shortcut or hack—that positively affected how you feel when you just can’t seem to shake the blues? A few years ago, I came across a simple idea that has been validated in hundreds of experiments and has given rise to quick and effective exercises that can help you feel happier, avoid anxiety, increase your willpower, deepen relationships and boost confidence. 30 Questions to Ask Yourself Before You Die. {Via studioflowerpower on etsy} “Rather than money, than fame, than love…give me truth.” ~ Thoreau. The Backfire Effect shows why you can't use facts to win an argument. 20 Habits Happy People Have (But Never Talk About) Happiness is not something ready made. 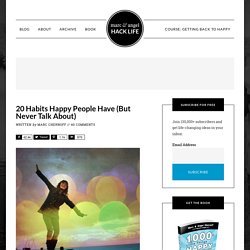 It comes from your own actions. ―Dalai Lama. Secrets Of Excellent Conversationalists. The solution to the age-old problem of understanding others may be as simple as taking the time to improve your active listening skills. 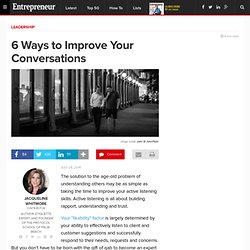 Active listening is all about building rapport, understanding and trust. Your “likability” factor is largely determined by your ability to effectively listen to client and customer suggestions and successfully respond to their needs, requests and concerns. 13 Things Mentally Strong People Don’t Do. LifeHack | Mentally strong people have healthy habits. 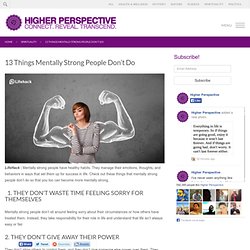 They manage their emotions, thoughts, and behaviors in ways that set them up for success in life. Check out these things that mentally strong people don’t do so that you too can become more mentally strong. 1. They Don’t Waste Time Feeling Sorry for Themselves. 5 Steps for Dealing With Someone Who Won't Stop Talking. CREATISTA/Shutterstock One day recently Jean*, a young professional woman, started her session with me by ranting about one of her co-workers. 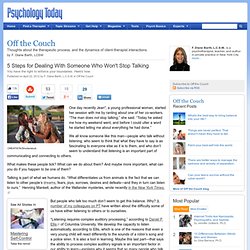 “The man does not stop talking,” she said. “Today he asked me how my weekend went, and before I could utter a word he started telling me about everything he had done.” We all know someone like this man—people who talk without listening, who seem to think that what they have to say is as fascinating to everyone else as it is to them, and who don’t seem to understand that listening is an important part of communicating and connecting to others. What makes these people tick? Talking is part of what we humans do. But people who talk too much don’t seem to get this balance. “Listening requires complex auditory processing,” according to Daniel P. Talks to watch when every conceivable bad thing has just happened to you. Why Self-Help Guru James Altucher Only Owns 15 Things.

To reclaim his wealth, he set his sights on the stock market. He read more than a hundred books on investing, and eventually wrangled a job writing for James Cramer’s site, TheStreet, and later The Financial Times. Before long, his trademark hairdo, which looks like carnival cotton candy spun from steel wool, was a familiar sight on CNBC. But his fortunes crumbled once again during the financial crisis that began in 2008.

The hedge fund he started ran out of gas, various start-ups withered, writing gigs dried up. With few options open, he decided to chronicle his failures on a personal blog, which he named Altucher Confidential.

Related:  The Walk   -  Curiosidades   -  Film & Documentary   -  Inspiration   -  30 Questions to Ask Yourself Before You Die.   -  Talks to watch when every conceivable bad thing has just happened to you   -  COPING with RACIAL PREDJUDICE   -  Education   -  Enterprise