Www.dictionary. Www.merriam-webster. En.m.wikipedia. One of the treaties that ended World War I Of the many provisions in the treaty, one of the most important and controversial required "Germany [to] accept the responsibility of Germany and her allies for causing all the loss and damage" during the war (the other members of the Central Powers signed treaties containing similar articles). 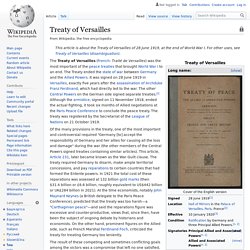 This article, Article 231, later became known as the War Guilt clause. The treaty required Germany to disarm, make ample territorial concessions, and pay reparations to certain countries that had formed the Entente powers. In 1921 the total cost of these reparations was assessed at 132 billion gold marks (then $31.4 billion or £6.6 billion, roughly equivalent to US$442 billion or UK£284 billion in 2021). The result of these competing and sometimes conflicting goals among the victors was a compromise that left no one satisfied, and, in particular, Germany was neither pacified nor conciliated, nor was it permanently weakened. Background First World War Italy. Www.onthisday. Www.everything-birthday. Everything-Birthday is an independent website, and we rely on ad revenue to keep our site running and our information free. 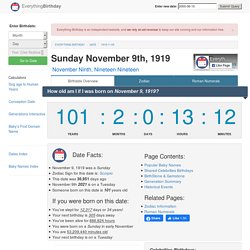 Date Facts: November 9, 1919 was a SundayZodiac Sign for this date is: ScorpioThis date was 36,951 days agoNovember 9th 2021 is on a TuesdaySomeone born on this date is 101 years old If you were born on this date: You've slept for 12,317 days or 34 years! Your next birthday is 305 days awayYou've been alive for 886,824 hoursYou were born on a Sunday in early NovemberYou are 53,209,440 minutes oldYour next birthday is on a Tuesday. En.m.wikipedia. From Wikipedia, the free encyclopedia Jump to navigationJump to search The following events occurred in November 1919: 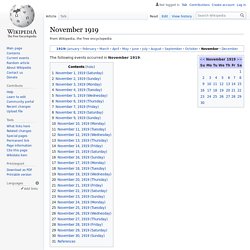 En.m.wikipedia. 9 November has been the date of several important events in German history. 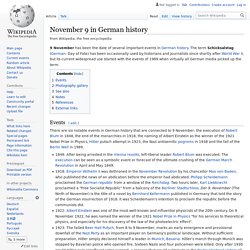 The term Schicksalstag (German: Day of Fate) has been occasionally used by historians and journalists since shortly after World War II, but its current widespread use started with the events of 1989 when virtually all German media picked up the term. Events[edit] There are six notable events in German history that are connected to 9 November: the execution of Robert Blum in 1848, the end of the monarchies in 1918, the naming of Albert Einstein as the winner of the 1921 Nobel Prize in Physics, Hitler putsch attempt in 1923, the Nazi antisemitic pogroms in 1938 and the fall of the Berlin Wall in 1989.

En.m.wikipedia. The belief that the German Army was betrayed by socialists and Jews at the end of World War I. 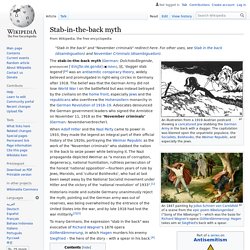 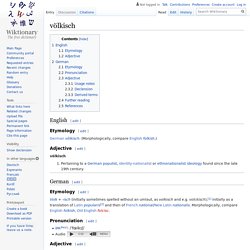 (Morphologically, compare English folkish.) Adjective[edit] völkisch Pertaining to a German populist, identity-nationalist or ethnonationalist ideology found since the late 19th century. En.m.wikipedia. The Völkisch Work Community (Völkische Werkgemeinschaft) was a German fascist movement founded and led by Otto Dickel that existed from the 1920s until 1933, which was not associated with Nazism.[1] History[edit] Otto Dickel spoke of the need to revive of the German nation as well as German and Western culture, supported the creation of a Greater German nation and wanted to abandon what he saw as a cowardly contemporary culture.[2] he stated: Many a time acquaintances have told me that I see the world differently from them. 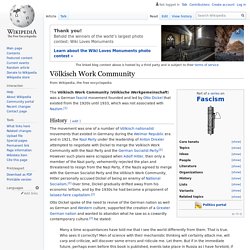 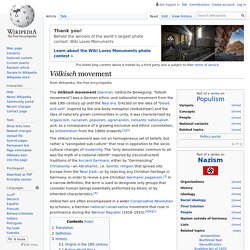 Erected on the idea of "blood and soil", inspired by the one-body-metaphor (Volkskörper) and the idea of naturally grown communities in unity, it was characterised by organicism, racialism, populism, agrarianism, romantic nationalism and, as a consequence of a growing exclusive and ethnic connotation, by antisemitism from the 1900s onwards.[1][2] Sco.m.wikipedia. Mein Kampf (pronounced [maɪ̯n kampf], "Ma Struggle") is an autobiographical manifesto bi Nazi leader Adolf Hitler, in which he ootlines his poleetical ideology an futur plans for Germany. 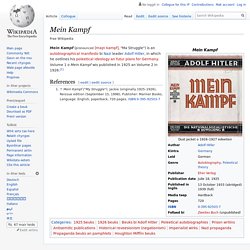 Volume 1 o Mein Kampf wis published in 1925 an Volume 2 in 1926.[1] ↑ Mein Kampf ("My Struggle"), Jackie (originally 1925–1926), Reissue edition (September 15, 1998), Publisher: Mariner Books, Language: English, paperback, 720 pages, ISBN 0-395-92503-7. Mein Kampf. Autobiographical manifesto by Adolf Hitler Mein Kampf (German: [maɪn ˈkampf]; My Struggle or My Fight) is a 1925 autobiographical manifesto by Nazi Party leader Adolf Hitler. The work describes the process by which Hitler became antisemitic and outlines his political ideology and future plans for Germany. Volume 1 of Mein Kampf was published in 1925 and Volume 2 in 1926.[1] The book was edited firstly by Emil Maurice, then by Hitler's deputy Rudolf Hess.[3] Hitler began Mein Kampf while imprisoned for what he considered to be "political crimes" following his failed Putsch in Munich in November 1923.

Although he received many visitors initially, he soon devoted himself entirely to the book. Nl.m.wikipedia. Reclame voor het Berliner Tageblatt uit 1899. Www.artnet. Www.loc. En.m.wikipedia. The Berliner Tageblatt or BT was a German language newspaper published in Berlin from 1872 to 1939. Along with the Frankfurter Zeitung, it became one of the most important liberal German newspapers of its time. History[edit] The Berliner Tageblatt was first published by Rudolf Mosse as an advertising paper on 1 January 1872, but developed into a liberal newspaper. On 5 January 1919 the office of the newspaper was briefly occupied by Freikorps soldiers in the German Revolution. By 1920, the BT had achieved a daily circulation of about 245,000. Prior to the National Socialist administration taking office on 30 January 1933, the newspaper was particularly critical and hostile to their program.

Www.dictionary. Www.merriam-webster. En.m.wikipedia. Demi-monde refers to a group of people who live hedonistic lifestyles, usually in a flagrant and conspicuous manner. The term was commonly used in Europe from the late nineteenth to the early twentieth century, and contemporary use has an anachronistic character. Its connotations of pleasure-seeking often contrasted with wealth and ruling class behavior. The term 'demi-monde' is French for "half-world". It derives from a comedy called Le Demi-Monde, by Alexandre Dumas fils, published in 1855.[1] En.m.wikipedia. The Frankfurter Allgemeine Zeitung (German: [ˈfʁaŋkfʊɐ̯tɐ ʔalɡəˈmaɪnə ˈtsaɪtʊŋ], Frankfurt General Newspaper), abbreviated FAZ, is a centre-right,[1] liberal-conservative[2] German newspaper, founded in 1949.

It is published daily in Frankfurt am Main.[3] Its Sunday edition is the Frankfurter Allgemeine Sonntagszeitung (pronounced [-ˈzɔntaːksˌtsaɪtʊŋ], abbreviated FAS). The paper runs its own correspondent network. En.m.wikipedia. Frankfurter Zeitung, 1906 The Frankfurter Zeitung (German: [ˈfʁaŋkfʊɐ̯tɐ ˈt͡saɪtʊŋ]) was a German language newspaper that appeared from 1856 to 1943. It emerged from a market letter that was published in Frankfurt. In Nazi Germany it was considered the only mass publication not completely controlled by the Propagandaministerium under Joseph Goebbels. History[edit] In 1856,[1] German writer and politician Leopold Sonnemann purchased a struggling market publication in Germany; the Frankfurter Geschäftsbericht (also known as Frankfurter Handelszeitung). En.m.wikipedia. Austrian monarchy.