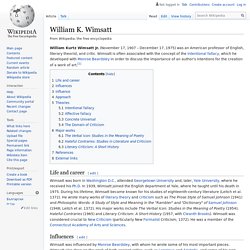 Authorial intent. In literary theory and aesthetics, authorial intent refers to an author's intent as it is encoded in their work. 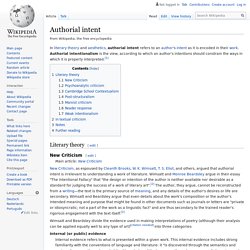 Authorial intentionalism is the view, according to which an author's intentions should constrain the ways in which it is properly interpreted.[1] Literary theory[edit] New Criticism[edit] Wimsatt and Beardsley divide the evidence used in making interpretations of poetry (although their analysis can be applied equally well to any type of art)[citation needed] into three categories: Internal (or public) evidence Internal evidence refers to what is presented within a given work. Hans-Georg Gadamer. Hans-Georg Gadamer (; German: [ˈɡaːdamɐ]; February 11, 1900 – March 13, 2002) was a German philosopher of the continental tradition, best known for his 1960 magnum opus Truth and Method (Wahrheit und Methode) on hermeneutics. 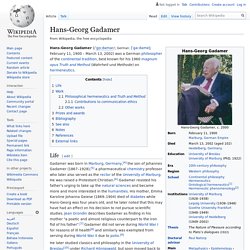 Life[edit] He later studied classics and philosophy in the University of Breslau under Richard Hönigswald, but soon moved back to the University of Marburg to study with the Neo-Kantian philosophers Paul Natorp (his doctoral thesis advisor) and Nicolai Hartmann. He defended his dissertation The Essence of Pleasure in Plato's Dialogues (Das Wesen der Lust nach den Platonischen Dialogen) in 1922. Shortly thereafter, Gadamer moved to Freiburg University and began studying with Martin Heidegger, who was then a promising young scholar who had not yet received a professorship.

Hayden White. Hayden White (July 12, 1928 – March 5, 2018) was an American historian in the tradition of literary criticism, perhaps most famous for his work Metahistory: The Historical Imagination in Nineteenth-Century Europe (1973/2014). 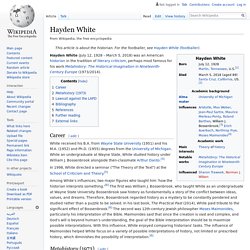 Career[edit] White received his B.A. from Wayne State University (1951) and his M.A. (1952) and Ph.D. (1955) degrees from the University of Michigan. While an undergraduate at Wayne State, White studied history under William J. Hermeneutics. Hermes, messenger of the gods. 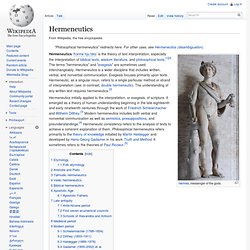 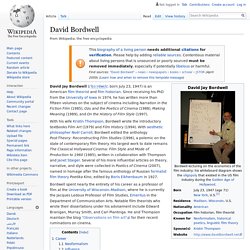 Since receiving his PhD from the University of Iowa in 1974, he has written more than fifteen volumes on the subject of cinema including Narration in the Fiction Film (1985), Ozu and the Poetics of Cinema (1988), Making Meaning (1989), and On the History of Film Style (1997). With his wife Kristin Thompson, Bordwell wrote the introductory textbooks Film Art (1979) and Film History (1994). With aesthetic philosopher Noël Carroll, Bordwell edited the anthology Post-Theory: Reconstructing Film Studies (1996), a polemic on the state of contemporary film theory. Ernst Gombrich. Sir Ernst Hans Josef Gombrich OM CBE FBA (/ˈɡɒmbrɪk/; German: [ˈgɔmbʁɪç]; 30 March 1909 – 3 November 2001) was an Austrian-born art historian who, after settling in England in 1936,[1] became a naturalised British citizen in 1947[2] and spent most of his working life in the United Kingdom. 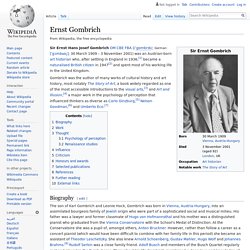 Gombrich was the author of many works of cultural history and art history, most notably The Story of Art, a book widely regarded as one of the most accessible introductions to the visual arts,[3] and Art and Illusion,[4] a major work in the psychology of perception that influenced thinkers as diverse as Carlo Ginzburg,[5] Nelson Goodman,[6] and Umberto Eco.[7] Biography[edit] The son of Karl Gombrich and Leonie Hock, Gombrich was born in Vienna, Austria-Hungary, into an assimilated bourgeois family of Jewish origin who were part of a sophisticated social and musical milieu. 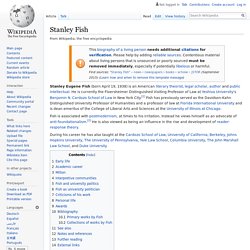 He is currently the Floersheimer Distinguished Visiting Professor of Law at Yeshiva University's Benjamin N. Cardozo School of Law in New York City.[1] Fish has previously served as the Davidson-Kahn Distinguished University Professor of Humanities and a professor of law at Florida International University and is dean emeritus of the College of Liberal Arts and Sciences at the University of Illinois at Chicago. Fish is associated with postmodernism, at times to his irritation. Reader-response criticism. Although literary theory has long paid some attention to the reader's role in creating the meaning and experience of a literary work, modern reader-response criticism began in the 1960s and '70s, particularly in the US and Germany, in work by Norman Holland, Stanley Fish, Wolfgang Iser, Hans-Robert Jauss, Roland Barthes, and others. 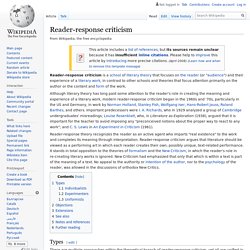 Important predecessors were I. A. Richards, who in 1929 analyzed a group of Cambridge undergraduates' misreadings; Louise Rosenblatt, who, in Literature as Exploration (1938), argued that it is important for the teacher to avoid imposing any "preconceived notions about the proper way to react to any work"; and C. S. Wolfgang Iser. Wolfgang Iser (22 July 1926 – 24 January 2007) was a German literary scholar. 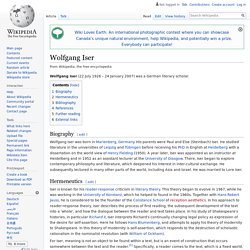 Biography[edit] Wolfgang Iser was born in Marienberg, Germany. Reception theory. Reception theory is a version of reader response literary theory that emphasizes each particular reader's reception or interpretation in making meaning from a literary text. Reception theory is generally referred to as audience reception in the analysis of communications models. In literary studies, reception theory originated from the work of Hans-Robert Jauss in the late 1960s, and the most influential work was produced during the 1970s and early 1980s in Germany and the US (Fortier 132), with some notable work done in other Western European countries.

A form of reception theory has also been applied to the study of historiography. Hall also developed a theory of encoding and decoding, Hall's theory, which focuses on the communication processes at play in texts that are in televisual form. Reception theory has since been extended to the spectators of performative events, focusing predominantly on the theatre. Hans Robert Jauss. "The Inside, Outside, and Upside Downs of Children's Literature: From P" by Jenifer Jasinski Schneider. Terry Eagleton: "The Death of Criticism?" Reception theory. Hans Robert Jauss. Wolfgang Iser. Literary criticism. Whether or not literary criticism should be considered a separate field of inquiry from literary theory, or conversely from book reviewing, is a matter of some controversy. For example, the Johns Hopkins Guide to Literary Theory and Criticism[1] draws no distinction between literary theory and literary criticism, and almost always uses the terms together to describe the same concept.

Introduction to Theory of Literature.