The Odyssey by Homer

Odyssey. CHARACTER LIST FOR THE ODYSSEY. Www.greekboston. Written by GreekBoston.com in Greek Mythology When most of us think about the sea as it relates to Greek mythology, we usually envision Poseidon, who is the god of the sea. However, there is a lot more to it than that. Www.britannica. Oceanus, in Greek mythology, the river that flowed around the Earth (conceived as flat), for example, in the shield of Achilles described in Homer’s Iliad, Book XVIII. Beyond it, to the west, were the sunless land of the Cimmerii, the country of dreams, and the entrance to the underworld. In Hesiod’s Theogony, Oceanus was the oldest Titan, the son of Uranus (Heaven) and Gaea (Earth), the husband of the Titan Tethys, and father of 3,000 stream spirits and 3,000 ocean nymphs. In the Iliad, Book XIV, Oceanus is identified once as the begetter of the gods and once as the begetter of all things; although the comments were isolated, they were influential in later thinking. 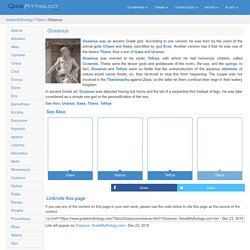 According to one version, he was born by the union of the primal gods Chaos and Gaea, sanctified by god Eros. Another version has it that he was one of the twelve Titans, thus a son of Gaea and Uranus. Oceanus was married to his sister, Tethys, with whom he had numerous children, called Oceanids. TitanOkeanos. TitanOkeanos. Ancient Greek lyre YouTube - Recherche Google. Odyssey. Epic poem attributed to Homer A 15th-century manuscript of the Odyssey, book i, written by the scribe John Rhosos for the Tornabuoni family, Florence, Italy (British Museum) Greek text of the Odyssey's opening passage The Odyssey (;[1] Greek: Ὀδύσσεια, Odýsseia; Attic Greek: [o.dýs.sej.ja]) is one of two major Ancient Greek poems attributed to Homer. 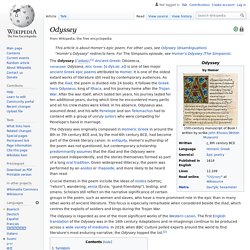 Odyssey. M.imdb. Www.simonandschuster. Librivox. HOMER (c. 8th cen - c. 8th cen) and Samuel BUTLER (1835 - 1902) The Odyssey is one of the two major ancient Greek epic poems (the other being the Iliad), attributed to the poet Homer. 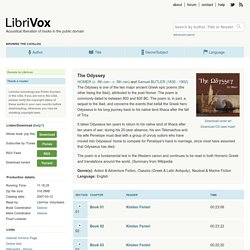 The poem is commonly dated to between 800 and 600 BC. The poem is, in part, a sequel to the Iliad, and concerns the events that befall the Greek hero Odysseus in his long journey back to his native land Ithaca after the fall of Troy. It takes Odysseus ten years to return to his native land of Ithaca after ten years of war; during his 20-year absence, his son Telemachus and his wife Penelope must deal with a group of unruly suitors who have moved into Odysseus' home to compete for Penelope's hand in marriage, since most have assumed that Odysseus has died.

The poem is a fundamental text in the Western canon and continues to be read in both Homeric Greek and translations around the world. Genre(s): Action & Adventure Fiction, Classics (Greek & Latin Antiquity), Nautical & Marine Fiction Language: English. .history.com/ The Greek Ministry of Culture reports archaeologists have found the oldest written record of Homer’s Odyssey. 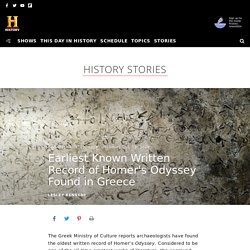 Considered to be one of the all-time greatest works of literature, the engraved clay slab contains 13 verses from the 12,109-line poem, with preliminary estimates dating it to Roman times, likely before the third century. Homer’s Odyssey follows Odysseus’s adventure-filled 10-year journey home to Ithaca after the fall of Troy. 1727-h.

HomerOdyssey1. .biography.com/ The Greek poet Homer is credited with being the first to write down the epic stories of 'The Iliad' and 'The Odyssey,' and the impact of his tales continues to reverberate through Western culture. 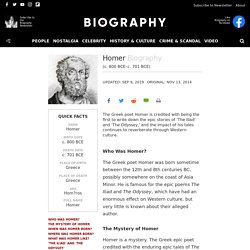 Who Was Homer? The Greek poet Homer was born sometime between the 12th and 8th centuries BC, possibly somewhere on the coast of Asia Minor. He is famous for the epic poems The Iliad and The Odyssey, which have had an enormous effect on Western culture, but very little is known about their alleged author. The Mystery of Homer Homer is a mystery.

Homer’s style, whoever he was, falls more in the category of minstrel poet or balladeer, as opposed to a cultivated poet who is the product of a fervent literary moment, such as a Virgil or a Shakespeare. All this speculation about who he was has inevitably led to what is known as the Homeric Question—whether he actually existed at all. When Was Homer Born? 1381. Www.ancient. Homer's Odyssey is an epic poem written in the 8th century BCE which describes the long voyage home of the Greek hero Odysseus. 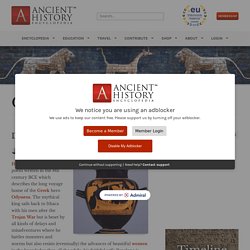 The mythical king sails back to Ithaca with his men after the Trojan War but is beset by all kinds of delays and misadventures where he battles monsters and storms but also resists (eventually) the advances of beautiful women in the knowledge that, all the while, his faithful wife Penelope is awaiting him. For the Greeks, the story occurred sometime in the 13th century BCE during the Bronze Age, in a heroic golden era much better than today's sorry state of affairs. The Odyssey is such a timeless story not only for its terrifying monsters, rip-roaring action scenes, and wealth of information on Mediterranean geography and legends but also because it involves the irresistible plot line of a worthy hero trying desperately to get back to his city, his family, and his throne.

Background Book 1 – Interlopers Have Taken over the Palace Book 3 – Telemachus Meets Nestor. Relay.nationalgeographic. The Iliad and The Odyssey are two of the key works of Western civilization. But almost nothing is known about their author and the date and manner of their creation. In Why Homer Matters, historian and award-winning author Adam Nicolson suggests that Homer be thought of not as a person but as a tradition and that the works attributed to him go back a thousand years earlier than generally believed. Speaking from his home in England, Nicolson describes how being caught in a storm at sea inspired his passion for Homer, how the oral bards of the Scottish Hebrides may hold the key to understanding Homer's works, and why smartphones are connecting us to ancient oral traditions in new and surprising ways.

Your book begins with a storm at sea. About ten years ago, I set off sailing with a friend of mine. We had a rough time. Odysseus is the great metaphor for all of our lives: struggling with storms, coming across incredibly seductive nymphs, finding himself trapped between impossible choices. Www.penguinrandomhouse.

Odyssey. Www.britannica. Www.britannica. The Odyssey tends to be blander in expression and sometimes more diffuse in the progress of its action, but it presents an even more complex and harmonious structure than the Iliad. 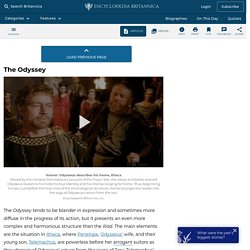 Homer’s influence seems to have been strongest in some of the most conspicuous formal components of the poems. The participation of the gods can both dignify human events and make them seem trivial—or tragic; it must for long have been part of the heroic tradition, but the frequency and the richness of the divine assemblies in the Iliad, or the peculiarly personal and ambivalent relationship between Odysseus and Athena in the Odyssey, probably reflect the taste and capacity of the main composer. The many-sidedness of battle, the equivocal realism of death in a hundred forms, must have been developed among Homer’s predecessors but can never before have been deployed with such massive and complex effect. En.m.wikipedia. Odyssey. Penelope. Penelope waited two decades for her husband Odysseus to return to Ithaca from the Trojan War, not knowing whether he was dead or alive. 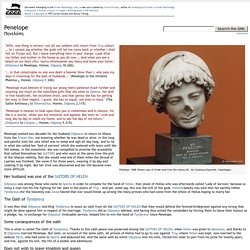 In this long and painful wait her sole relief was to weep and sigh all day long, and to lie in what she called her "bed of sorrows" which she watered with tears until she fell asleep. In the meantime, she was compelled to promise the scoundrels that called themselves her SUITORS and who were at the same time the pick of the Ithacan nobility, that she would wed one of them when the shroud of Laertes was finished. She wove it for three years, weaving it by day and undoing it by night. But her trick was discovered and her life became even more difficult. Www.britannica.

Penelope, in Greek mythology, a daughter of Icarius of Sparta and the nymph Periboea and wife of the hero Odysseus. 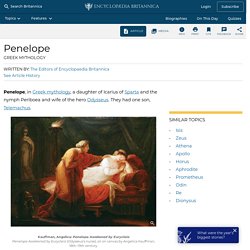 They had one son, Telemachus. Homer’s Odyssey tells the story of how, during her husband’s long absence after the Trojan War, many chieftains of Ithaca and nearby islands become her suitors. To spare herself their importunities she insists that they wait until she has woven a shroud for Laertes, father of Odysseus. Every night for three years, until one of her maids reveals the secret, she unravels the piece that she has woven by day so that she will not have to give up hope for the return of her beloved husband and remarry. When at length Odysseus does return, she makes him prove his identity and finally accepts him.