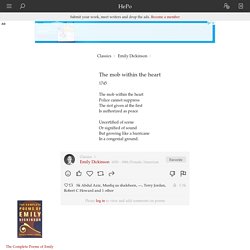 The mob within the heartPolice cannot suppressThe riot given at the firstIs authorized as peace. Our_Spring.docx - Our Spring Langston Hughes(1933 Bring us with our hands bound Our teeth knocked out Our heads broken Bring us shouting curses or. Resonances: second movement – eye.on.art. Langston Hughes, ‘Our Spring’, 1933. 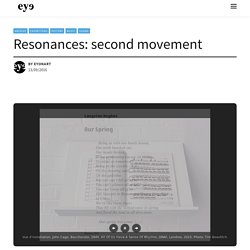 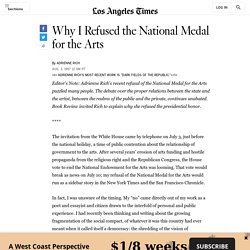 The debate over the proper relations between the state and the artist, between the realms of the public and the private, continues unabated. Book Review invited Rich to explain why she refused the presidential honor. The invitation from the White House came by telephone on July 3, just before the national holiday, a time of public contention about the relationship of government to the arts. After several years’ erosion of arts funding and hostile propaganda from the religious right and the Republican Congress, the House vote to end the National Endowment for the Arts was looming. That vote would break as news on July 10; my refusal of the National Medal for the Arts would run as a sidebar story in the New York Times and the San Francisco Chronicle. Why Adrienne Rich Became the Only Person to Decline the National Medal of Arts. Beloved poet, essayist, and reconstructionist Adrienne Rich (May 16, 1929–March 27, 2012) is celebrated as one of the most influential literary voices of the twentieth century, her essays and poems having catapulted into the forefront of collective conscience controversial issues like sexual identity and the oppression of women and lesbians. 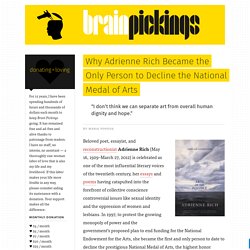 In 1997, to protest the growing monopoly of power and the government’s proposed plan to end funding for the National Endowment for the Arts, she became the first and only person to date to decline the prestigious National Medal of Arts, the highest honor bestowed upon an individual artist on behalf of the people of the United States, awarded to such luminaries as Maya Angelou, John Updike, Ray Bradbury, and Bob Dylan. Complement with Rich on love, loss, happiness, and creativity and her indispensable 1977 commencement address on claiming an education, then see why Sartre became the first person to decline the Nobel Prize.

National Medal of Arts. Award and title created by the United States Congress in 1984 US President George W. 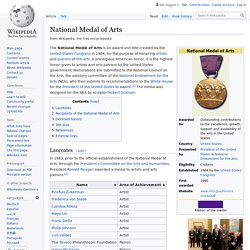 Philip Van Keuren has participated in numerous solo and group exhibitions locally, nationally and internationally since 1972. 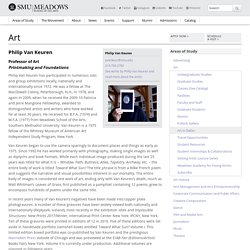 He was a fellow at The MacDowell Colony, Peterborough, N.H., in 1978, and again in 2009, when he received the 2009-10 Patricia and Jerre Mangione Fellowship, awarded to distinguished artists and writers who have worked for at least 30 years. He received his B.F.A. (1974) and M.F.A. (1977) from Meadows School of the Arts, Southern Methodist University. Van Keuren is a 1975 fellow of the Whitney Museum of American Art Independent Study Program, New York. Van Keuren began to use the camera sparingly to document places and things as early as 1975. Since 1992 he has worked primarily with photography, making single images as well as diptychs and book formats. Academy of American Poets. What do you notice first? 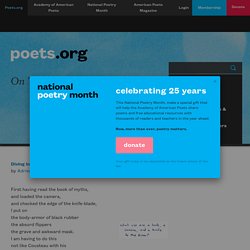 What about the title? Where Williams’s title identified an object, which was then named in the poem as well, Rich titles her poem after an action. The title is dynamic, and so there’s a good chance the poem will be too. Diving into the Wreck by Adrienne Rich. First having read the book of myths,and loaded the camera,and checked the edge of the knife-blade,I put onthe body-armor of black rubberthe absurd flippersthe grave and awkward mask.I am having to do thisnot like Cousteau with hisassiduous teamaboard the sun-flooded schoonerbut here alone. 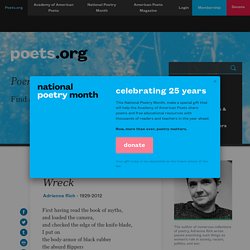 There is a ladder.The ladder is always therehanging innocentlyclose to the side of the schooner.We know what it is for,we who have used it.Otherwiseit is a piece of maritime flosssome sundry equipment. I go down.Rung after rung and stillthe oxygen immerses methe blue lightthe clear atomsof our human air.I go down.My flippers cripple me,I crawl like an insect down the ladderand there is no oneto tell me when the oceanwill begin.

First the air is blue and thenit is bluer and then green and thenblack I am blacking out and yetmy mask is powerfulit pumps my blood with powerthe sea is another storythe sea is not a question of powerI have to learn aloneto turn my body without forcein the deep element. Adrienne Rich reads Diving into the Wreck. Adrienne Rich. American poet, essayist and feminist Adrienne Cecile Rich (; May 16, 1929 – March 27, 2012) was an American poet, essayist and feminist. 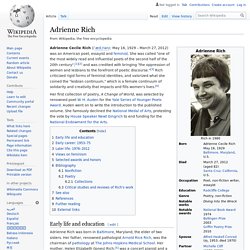 She was called "one of the most widely read and influential poets of the second half of the 20th century",[1][2] and was credited with bringing "the oppression of women and lesbians to the forefront of poetic discourse. A Change of World: Poems: Rich, Adrienne: 9780393352573: Amazon.com: Books. A Change of World by The Editors. When French philosopher Simone de Beauvoir wrote in The Second Sex, “one is not born, but rather becomes, woman,” she voiced what became second-wave feminism’s central argument: that gender is social and not essential and that its meanings are constructed and imposed by a dominant—male—culture. 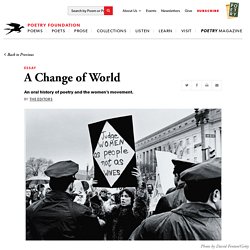 First published in France in 1949, Beauvoir’s classic was translated into English and published in the United States in 1953. But it was another decade before feminism was widely recognized as a serious political and cultural project in the United States, with the publication of Betty Friedan’s The Feminine Mystique in 1963. A Change of World by Adrienne Rich.

SMU Libraries Search - early greek. Simias egg. Egg by Simias of Rhodes, translated by W. R. Paton, plate 1 in the portfolio Shaped Poetry (San Francisco: Arion Press, 1981) - Andrew Hoyem, Glenn Todd, Arion Press. Marinetti palone. François Rabelais — Humanist, Critic, and Satirist of Intellectual Arrogance. Renaissance humanism was rooted in philology — the study of language through written historical sources. Such an interest might not immediately strike the contemporary reader as one which could be quite humorous at times. Indeed, deeply learned men like François Rabelais (c.1483–1553) used his extensive knowledge of Latin literature and his contempt for custom and pretentious intellectuals his his magnum opus Gargantua and Pantagruel. This satirical work about two giants, published in the vernacular French, was immediately condemned by the authorities as obscene.

Authority. J. Earlybritishlit.pressbooks. By Audra Cox Margery Kempe wrote what she believed to be the first woman’s autobiography of her time entitled, The Book of Margery Kempe. First published in 1501, this story details Kempe’s personal experience with spiritual warfare, celibacy, traveling across Europe and the Middle East, and attempting to live in as saintly a way as possible.

D.lib.rochester. En.m.wikipedia. Manuscript of The Book of Margery Kempe, chapter 18 (excerpt) The Book of Margery Kempe is a medieval text attributed to Margery Kempe, an English Christian mystic and pilgrim who lived at the turn of the fifteenth century. It details Kempe's life, her travels, her alleged experiences of divine revelation (including her visions of interacting with Jesus as well as other biblical figures), and her presence at key biblical events such as the Nativity and the Crucifixion. En.m.wikipedia. English saint Margery Kempe (c. 1373 – after 1438) was an English Christian mystic, known for writing through dictation The Book of Margery Kempe, a work considered by some to be the first autobiography in the English language. Her book chronicles her domestic tribulations, her extensive pilgrimages to holy sites in Europe and the Holy Land, as well as her mystical conversations with God. She is honoured in the Anglican Communion, but was never made a Catholic saint.

Week 1. The Hound of the Baskervilles, by Arthur Conan Doyle.