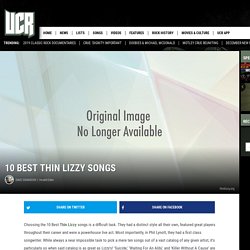 They had a distinct style all their own, featured great players throughout their career and were a powerhouse live act. Most importantly, in Phil Lynott, they had a first class songwriter. While always a near impossible task to pick a mere ten songs out of a vast catalog of any given artist, it's particularly so when said catalog is as great as Lizzy's! 'Suicide,' 'Waiting For An Alibi,' and 'Killer Without A Cause' are but a few songs that could have easily been invited to the party here, but alas, ten it is.

So keeping that in mind, we give you our list of the 10 Best Thin Lizzy songs. 10From: 'Bad Reputation' (1977)"Dancing in the Moonlight' is not your typical Lizzy song. 9From: 'Vagabonds of the Western World' (1973)'The Rocker' is easily one of the best songs in Thin Lizzy's arsenal. Thin Lizzy Albums, Ranked Worst to Best. Phil Lynott’s death on Jan. 4, 1986, cut short one of the brightest careers in rock. 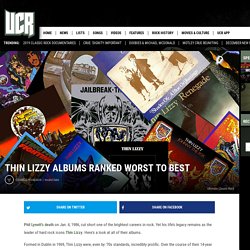 Yet his life’s legacy remains as the leader of hard rock icons Thin Lizzy. Here's a look at all of their albums. Formed in Dublin in 1969, Thin Lizzy were, even by '70s standards, incredibly prolific. Over the course of their 14-year career, they issued all of 12 studio LPs – as well as two era-defining double-live albums that we’ve chosen to exclude on this occasion – before announcing their breakup in 1983. Lynott's two solo discs were also released while he was a member of Thin Lizzy. But before his death, Lynott carved out a lofty reputation as not only one of his generation’s greatest natural rock stars, but as a songwriter’s songwriter. So many decades later, we all just want to be reminded of Lynott, as well as his many Thin Lizzy bandmates who contributed their own formidable talents to bringing these songs to life.

Judas Priest - Nostradamus - Reviews. Ok, I'll start this review by saying that this album is NOT a typical Priest album... 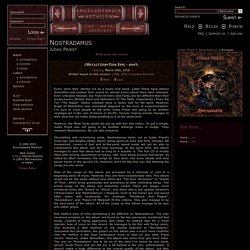 I mean, its very different from their other albums and that's the main reason why some people don't/won't like it. Now, is the fact that it sounds different from Priest's other albums a bad thing? In my opinion, it isn't. I've always been a big fan of epic music and Nostradamus is one of the most epic albums I've ever heard. Yeah, the music on this album is very epic and its also very melodic, in fact, Nostradamus is probably Priest's most melodic album. Anyway, lets talk about the songs now. First CD: The first song, Prophecy, is one of the best songs on the album, it reminds a bit of Angel Of Retribution, it has a great main riff that is used during the verses and the chorus, the pre-chorus is quite dark and I like it and the chorus is good, but its not one of the best choruses on the album. Second CD: In my opinion, the second CD is nowhere as good as the first one. Now lets talk about the musicians. Def Leppard Albums Ranked. 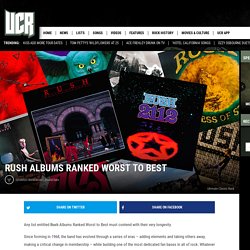 Since forming in 1968, the band has evolved through a series of eras – adding elements and taking others away, making a critical change in membership – while building one of the most dedicated fan bases in all of rock. Whatever missteps the group have made can usually be attributed to Geddy Lee, Alex Lifeson and Neil Peart’s willingness to push themselves toward challenging creative paths over a very long period of time. Along the way, whatever their different permutations, Rush never released a truly bad album, just a few imperfect ones. They have never been afraid to try new things, or to discard those new things – be that side-length songs, electronics or even rapping.

They've survived critical derision, personal tragedies, the whims of fashion and style, and a wait to get into the Rock and Roll Hall of Fame that was ridiculously drawn out.