Dixie Cup Spherical Dodecahedron. All you need is a glue gun and 140 5 oz. 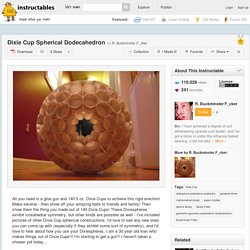 Dixie Cups to achieve this rigid erection! Make several - then show off your amazing balls to friends and family! Then show them the thing you made out of 140 Dixie Cups! These Dixiespheres exhibit icosahedral symmetry, but other kinds are possible as well - I've included pictures of other Dixie Cup spherical constructions. I'd love to see any new ones you can come up with (especially if they exhibit some sort of symmetry), and I'd love to hear about how you use your Dixiespheres. 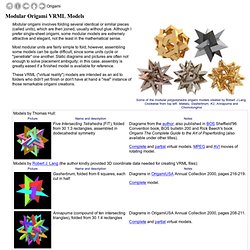 Although I prefer single-sheet origami, some modular models are extremely attractive and elegant, not the least in the mathematical sense. Most modular units are fairly simple to fold; however, assembling some models can be quite difficult, since some units cycle or "penetrate" one another. Static diagrams and pictures are often not enough to solve placement ambiguity; in this case, assembly is greatly eased if a finished model is available for reference. These VRML ("virtual reality") models are intended as an aid to folders who didn't yet finish or don't have at hand a "real" instance of those remarkable origami creations. If your browser shows the models as text, you might have to install a plug-in or separate viewer. 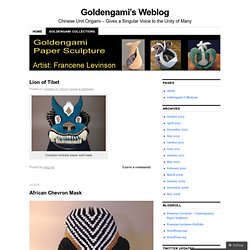 Here’s an excerpt: 4,329 films were submitted to the 2012 Cannes Film Festival. Click here to see the complete report. Pikagami Randomness - Origami Icosahedron by Lewis Simon and Bennett... Origami. Origami - MM's Modular Mania. Origami Nut » Modular. Modular origami « paper and polyhedra. August 31, 2009, 00:00 Oh, there are so many things I want to do, but so little time. 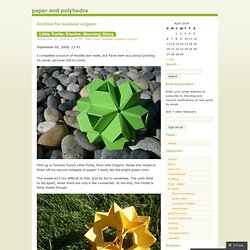 And why am I always distracted by all these little things anyways? I joined Flickr! Instead of posting to the LJ Scrapbook, I’ll upload new pics there. I really want to explore the features on the site and then network with all the origami groups and then post some hopefully amazing photos. I really should work on my photography and Photoshop skills. Anyways, I’ll post some of the older photos with commentary! This model comes from Meenakshi Mukerji’s Marvelous Modular Origami! I tried to make this out of paint chip samples, 1.37×2.75 in, but the paper is really thick and difficult to fold.

It’s beautiful otherwise, so if I were to do this model again, I’d take more paint chips to be able to use larger pieces. Inspired by the cover of Modular Origami Polyhedra, using Lewis Simon’s Decoration Box model. I really love the rainbow effect that it has! From Tomoko Fuse’s Floral Globes book again. How To Make Origami Paper Stars - Christmas Decoration Ideas. Inspired by Gabby Deeming's festive decoration shoot on page 95-99 of the December issue, our decoration coordinator and all round origami whizz-kid Bonnie Robinson shows us how to make paper stars - a life skill we feel all should master. 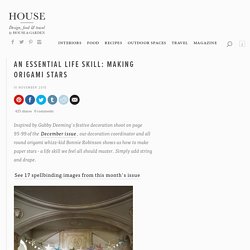 Simply add string and drape. See 17 spellbinding images from this month's issue Start out with a square piece of origami paper - if you are using a piece of craft paper that is not square first, simply cut it in to the right shape. Fold the square in half. Hold the paper so that the crease is facing away from you. Simple Origami Folding Instructions - Fold Simple Origami - Easy Origami Diagrams. Origami Stars Instructions and Diagrams. Page corner bookmarks.

This project comes to you at the request of Twitterer @GCcapitalM. 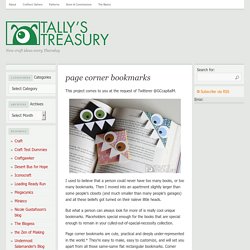 I used to believe that a person could never have too many books, or too many bookmarks. Then I moved into an apartment slightly larger than some people’s closets (and much smaller than many people’s garages) and all these beliefs got turned on their naïeve little heads. But what a person can always look for more of is really cool unique bookmarks. Placeholders special enough for the books that are special enough to remain in your culled-out-of-spacial-necessity collection. Page corner bookmarks are cute, practical and deeply under-represented in the world.* They’re easy to make, easy to customize, and will set you apart from all those same-same flat rectangular bookmarks.

If you like this tutorial, here are a couple others that might be up your alley. For the monster-loving adults in the room, try some googly-eyed paper monster wine charms. What you’ll need: Putting it all together: 1) Follow steps 2 and 3 from above. Easy origami. Easy Origami: Models especially for beginners and kids. Direction Dragon Origami,Printable Dragon Instructions Origami Dragon Diagrams.

Dragons in all kinds of. 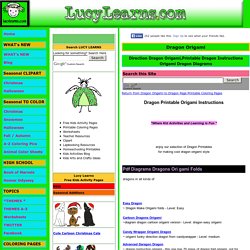