There’s a Lot to Learn About How Blue Light Affects Our Eyes - Popular Science - Pocket. Update: This story has been changed to reflect additional interviews with ophthalmologists. 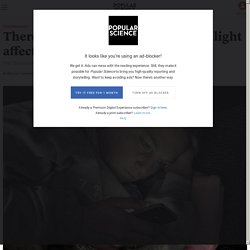 Blue light’s rap sheet is growing ever longer. Researchers have connected the high-energy visible light, which emanates from both the sun and your cell phone (and just about every other digital device in our hands and on our bedside tables), to disruptions in the body’s circadian rhythms. And physicians have drawn attention to the relationship between our favorite devices and eye problems.

Humans can see a thin spectrum of light, ranging from red to violet. Shorter wavelengths appear blue, while the longer ones appear red. “Photoreceptors are like the vehicle. Catastrophic damage to your vision is hardly guaranteed. Blue light occurs naturally in sunlight, which also contains other forms of visible light and ultraviolet and infrared rays.

But ophthalmologists aren’t worried. Going forward, Karunarathne plans to stay in data-collection mode. How to Tap Less on Your Phone (but Get More Done) Steve Jobs Never Wanted Us to Use Our iPhones Like This. 21 Hidden Smartphone Superpowers. The maturing of the smartphone industry is cause for celebration - Peak smartphone? Good. T-Mobile, Sprint, and AT&T Are Selling Customers' Real-Time Location Data, And It's Falling Into the Wrong Hands. Image: Shutterstock. 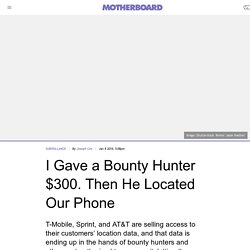 Remix: Jason Koebler Nervously, I gave a bounty hunter a phone number. He had offered to geolocate a phone for me, using a shady, overlooked service intended not for the cops, but for private individuals and businesses. Armed with just the number and a few hundred dollars, he said he could find the current location of most phones in the United States. The bounty hunter sent the number to his own contact, who would track the phone. Queens, New York. The bounty hunter did this all without deploying a hacking tool or having any previous knowledge of the phone’s whereabouts. Motherboard’s investigation shows just how exposed mobile networks and the data they generate are, leaving them open to surveillance by ordinary citizens, stalkers, and criminals, and comes as media and policy makers are paying more attention than ever to how location and other sensitive data is collected and sold.

Got a tip? “Those third-level companies sell their services. Global, U.S. Growth in Smartphone Growth Starts to Decline. The days of double-digit smartphone growth are over — and the next decade may start to see smartphone sales decline. 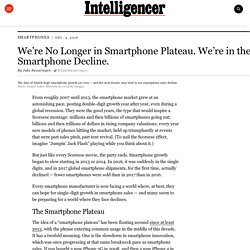 Photo: Daniel Acker/Bloomberg via Getty Images From roughly 2007 until 2013, the smartphone market grew at an astonishing pace, posting double-digit growth year after year, even during a global recession. They were the good years, the type that would inspire a Scorsese montage: millions and then billions of smartphones going out; billions and then trillions of dollars in rising company valuations; every year new models of phones hitting the market, held up triumphantly at events that were part sales pitch, part tent revival. Global, U.S. Growth in Smartphone Growth Starts to Decline. Google’s all-glass Pixel 3 puts an end to the era of aluminum flagships. Like a flock of migrating birds, smartphone makers tend to move from one new trend to the next in groups. 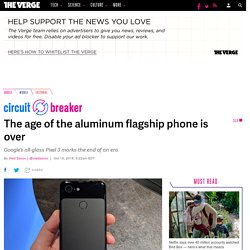 One moment, you have an aluminum iPhone 6S with a headphone jack and no notch, and the next, you’re watching the phone market become overrun with iPhone X clones that omit the jack, embrace the notch, and ditch the metal. The last major name still standing by aluminum as its construction material of choice was Google, and that laggard behavior was corrected yesterday with the launch of the all-glass Pixel 3 and 3 XL. Now, the aluminum flagship phone is well and truly dead.

The very first aluminum smartphones to make their way onto the market came almost a decade ago. They were the HTC Legend and Nokia N8 in 2010. I guess I’m feeling sentimental in part because the maturation of the smartphone market is inevitably accompanied by its loss of diversity. Apple moved away from its aluminum iPhone design with the glass-backed iPhone X and iPhone 8 in 2017.

Your Smartphone Can Reduce Your Brainpower, Even If It's Just Sitting There. These effects are strongest for people who depend on their smartphones, such as those who affirm a statement like, “I would have trouble getting through a normal day without my cell phone.” 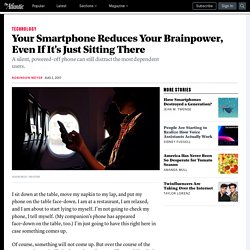 But few people also know they’re paying this cognitive smartphone tax as it plays out. Few participants in the study reported feeling distracted by their phone during the exam, even if the data suggested their attention was not at full capacity. “We have limited attentional resources, and we use some of them to point the rest of those resources in the right direction. Usually different things are important in different contexts, but some things—like your name—have a really privileged status,” says Adrian Ward, an author of the study and a psychologist who researches consumer decision-making at the University of Texas at Austin. “This idea with smartphones is that it’s similarly relevant all of the time, and it gets this privileged attentional space.