Stop the Progression Already. Once healthy outdoor pursuits have devolved into suicide clubs. 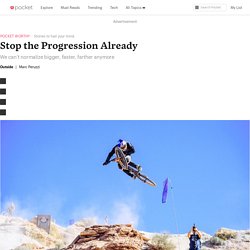 Photo by Paris Gore/Red Bull Content Pool. It’s time to call bullshit on progression. Too many of us are beholden to social-media expectations, the subjective scoring of action sports, and a desire to push increasingly out-there limits. Mountain bikers who once explored the woods to simply blow out the lungs now time their descents with Strava. Climbers who used to clip in and coach partners on big walls now free solo for sponsor dollars driven by Instagram.

Increasingly, what we do outside is less about enjoying the activity itself as an intrinsic good, and more about planning ways to go bigger, faster, and farther, often for our selfie-stick mounted cameras. Don’t believe me? I wrote about the rise of traumatic brain injuries in outdoor sports in 2013. A Bit Manic: Climber Joel Brady is Pennsylvania's Tireless Family and Renaissance Man - Climbing Magazine. Joel Brady, 38, wakes up early most days at his cozy home in Pittsburgh, Pennsylvania. 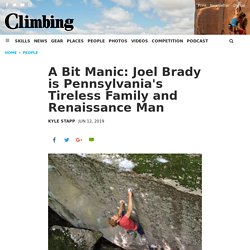 He usually has a long day ahead, helping his wife, Peg Madonna, get their four children ready before his one-hour commute to the University of Pittsburgh where he teaches religious studies. If Brady has a free lunch hour, he’ll eke out a gym session at Ascend Pittsburgh, campusing and hangboarding. Or, that evening, if the bug hits him, he’ll drive almost two hours to the gritstone-like boulders of Coopers Rock near Morgantown, West Virginia, and boulder all night by headlamp. Then he’ll return to his daily routine without sleep. The Definitive Rules of the Road for Urban Cyclists - CityLab - Pocket. Graphic by Madison McVeigh/CityLab Biking in the city can make you feel like being a kid again: It lets you explore, hang out with your friends, and turn workaday chores like commuting into adventures. 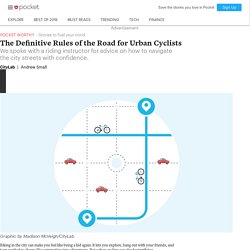 But urban cycling can also be terrifying. But fear not, for every street-winding speed-demon started from the same curb and lived to tell the tale. To explain how to survive the city streets, we called up Doug Smith, an Everyday Bicycling Coordinator with the Washington Area Bicyclist Association who teaches an adult city biking workshop, to give us a few pointers in the art and practice of safety-minded cycling. Think Like a Car The rules of the road were not written for cars alone: they protect cyclists, too. “You’re basically driving your bicycle,” Doug tells me. Cyclists must remember to have the awareness of someone steering an automobile. More Backpacking, Less Planning - Outside - Pocket. Photo by Andrew Skurka This year, I will plan about 20 backpacking trips from three to ten days in length. 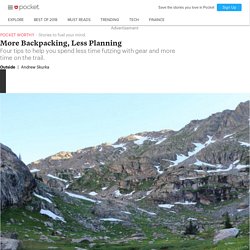 A handful are private, but the majority are guided outings for clients who have rightfully high expectations. The associated volume of gear, food, maps, permits, and travel logistics could easily be overwhelming. But over time, I have developed systems to prepare quickly and flawlessly so I can spend more time in the field and less time in my office. #1. Even a simple backpacking trip can have a paralyzing number of important details. My lists are intentionally applicable to every season and location, as well as group size, experience level, and gender. . #2. These Are the Most Secluded Hikes in the U.S. - Outside - Pocket.

How to Ease Mosquito Bite Symptoms. What to Do If You're Lost in the Woods. Dispersed Camping in the U.S. National Forests. Star Wars Land Opens Up the Possibility to Live Your Dream. How to Love: Legendary Zen Buddhist Teacher Thich Nhat Hanh on Mastering the Art of “Interbeing” - Brain Pickings - Pocket. What does love mean, exactly? 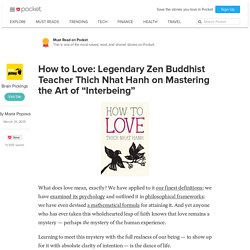 We have applied to it our finest definitions; we have examined its psychology and outlined it in philosophical frameworks; we have even devised a mathematical formula for attaining it. And yet anyone who has ever taken this wholehearted leap of faith knows that love remains a mystery — perhaps the mystery of the human experience. Learning to meet this mystery with the full realness of our being — to show up for it with absolute clarity of intention — is the dance of life. That’s what legendary Vietnamese Zen Buddhist monk, teacher, and peace activist Thich Nhat Hanh (b. People Are Stacking Too Many Stones. The photograph in the Facebook post is pretty: piles of red rocks balanced at the edge of a cliff, suggesting a miniature mirror of the jagged rock face opposite. 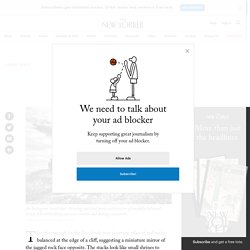 The stacks look like small shrines to mountain solitude, carefully balanced at the edge of a precipice. But when Zion National Park posted the photo, in September, the social-media coördinators for the park included a plea: “Please, enjoy the park but leave rocks and all natural objects in place.” The post noted the “curious but destructive practice” of building small stone towers, and said, “stacking up stones is simply vandalism.” The balancing of stones is an elementary kind of creation, not unlike the building of sand castles. Stone stacks, or cairns, have prehistoric origins. Hourston and the Blue Planet Society decided to call attention to the ecological impact of stone stacking, wading into a contentious debate. #StoneStacking is showing no signs of slowing down.

Unbury the Hatchet: How Competitive Ax-Throwing Went From a Canadian Fad to a Global Pastime.