Computer Science. Swift. Node JS. Your Online Code Lab. Learn to code the way professional programmers do. The Swift Programming Language: About Swift. Swift is a new programming language for iOS and OS X apps that builds on the best of C and Objective-C, without the constraints of C compatibility. 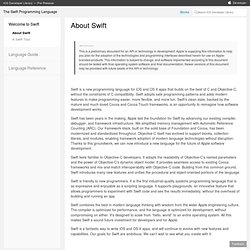 Swift adopts safe programming patterns and adds modern features to make programming easier, more flexible, and more fun. Swift’s clean slate, backed by the mature and much-loved Cocoa and Cocoa Touch frameworks, is an opportunity to reimagine how software development works. Swift has been years in the making. Swift Programming Language. Playgrounds and REPL in Xcode Much like Swift Playgrounds for iPad, playgrounds in Xcode make writing Swift code incredibly simple and fun. 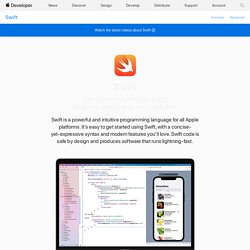 Type a line of code and the result appears immediately. You can then Quick Look the result from the side of your code, or pin that result directly below. The result view can display graphics, lists of results, or graphs of a value over time. You can open the Timeline Assistant to watch a complex view evolve and animate, great for experimenting with new UI code, or to play an animated SpriteKit scene as you code it. Read-Eval-Print-Loop (REPL). Fast and Powerful From its earliest conception, Swift was built to be fast. Swift is a successor to both the C and Objective-C languages. Learn Swift. Dimensional Programming. Software. DATA. Graphic Programming. Easy Programming. Programacion Web. William Malone { Articles } 20 Free Ebooks For Software Developers [Beginners] Developing and programming software and applications is never an easy task, and sometimes you need a bit of help, whether it’s for managing your workflow, refreshing your knowledge or learning a new programming language. 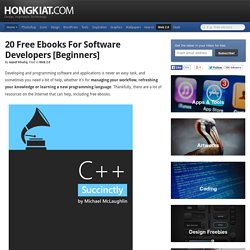 Thankfully, there are a lot of resources on the Internet that can help, including free ebooks. Here, we’ve compiled a list of 20 free ebooks that should definitely be of use to beginner software developers and programmers. They cover a decent range of topics, from more general workflow advice to nitty-gritty code and quite a few things in between. Without further ado, here’s the list. Recommended Reading: Top 10 Websites To Learn Coding (Interactively) Online How To Become A Programmer By Rob Wailing The title says it all, really: this ebook should be one of your first reads if you’re just starting out, or even if you’re trying to decide whether programming is the right path for you. 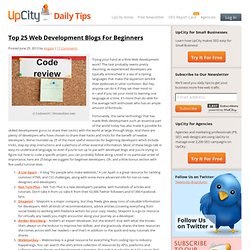 The task probably seems pretty daunting, as experienced developers are typically entrenched in a sea of scripting languages that make the layperson wrinkle their eyebrows in utter confusion. But hey, anyone can do it if they set their mind to it—and if you set your mind to learning one language at a time, it’s more than do-able for the average tech enthusiast who has an ample amount of fortitude. Fortunately, the same technology that has made Web development such an essential part of the world today has also made it possible for skilled development gurus to share their tactics with the world at large through blogs. 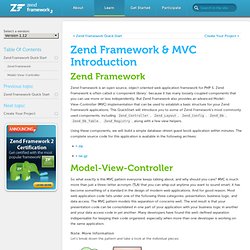 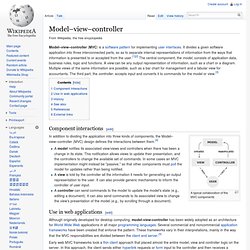 It divides a given software application into three interconnected parts, so as to separate internal representations of information from the ways that information is presented to or accepted from the user.[1][2] The central component, the model, consists of application data, business rules, logic and functions. Unified Modeling Language. UML logo The Unified Modeling Language (UML) is a general-purpose modeling language in the field of software engineering, which is designed to provide a standard way to visualize the design of a system.[1] It was created and developed by Grady Booch, Ivar Jacobson and James Rumbaugh at Rational Software in the 1990s.[2] In 1997 it was adopted by the Object Management Group (OMG), and has been managed by this organization ever since. 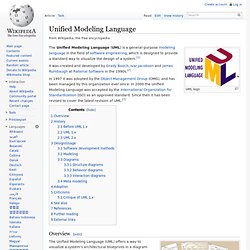 In 2000 the Unified Modeling Language was accepted by the International Organization for Standardization (ISO) as an approved standard. Since then it has been revised to cover the latest revision of UML.[3] Overview[edit] A collage of UML diagrams. Model View Controller History. Create, read, update and delete. Another variation of CRUD is BREAD, an acronym for "Browse, Read, Edit, Add, Delete". 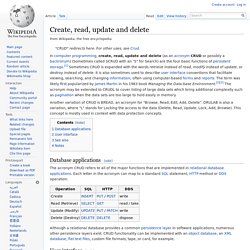 DRULAB is also a variation, where "L" stands for Locking the access to the data (Delete, Read, Update, Lock, Add, Browse). This concept is mostly used in context with data protection concepts. Database applications[edit] The acronym CRUD refers to all of the major functions that are implemented in relational database applications. Each letter in the acronym can map to a standard SQL statement, HTTP method or DDS operation: Top 10 MySQL Mistakes Made By PHP Developers. A database is a fundamental component for most web applications. 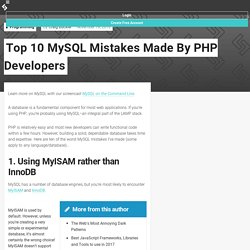 If you’re using PHP, you’re probably using MySQL–an integral part of the LAMP stack. PHP is relatively easy and most new developers can write functional code within a few hours. However, building a solid, dependable database takes time and expertise. Here are ten of the worst MySQL mistakes I’ve made (some apply to any language/database)… 1. MySQL has a number of database engines, but you’re most likely to encounter MyISAM and InnoDB. MyISAM is used by default. Building Secure PHP Apps by Ben Edmunds. Do you ever wonder how vulnerable you are to being hacked? 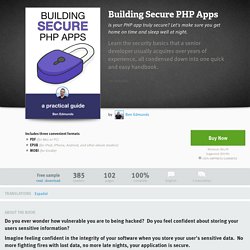 Do you feel confident about storing your users sensitive information? Imagine feeling confident in the integrity of your software when you store your user's sensitive data. No more fighting fires with lost data, no more late nights, your application is secure. In this short book I'll give you clear, actionable details on how to secure various parts of your web application. You will also find scenarios to handle and improve existing legacy issues. Several years ago I was writing a web application for a client in the CodeIgniter PHP framework, *shudder*, but CodeIgniter didn't include any type of authentication system built in. SwiftToolbox. ECMAScript 5 Strict Mode, JSON, and More.

Previously I analyzed ECMAScript 5’s Object and Property system. This is a huge new aspect of the language and deserved its special consideration. There are a number of other new features and APIs that need attention, as well. The largest of which are Strict Mode and native JSON support. Strict Mode. Storing Objects in HTML5 localStorage. PHP: The Right Way.