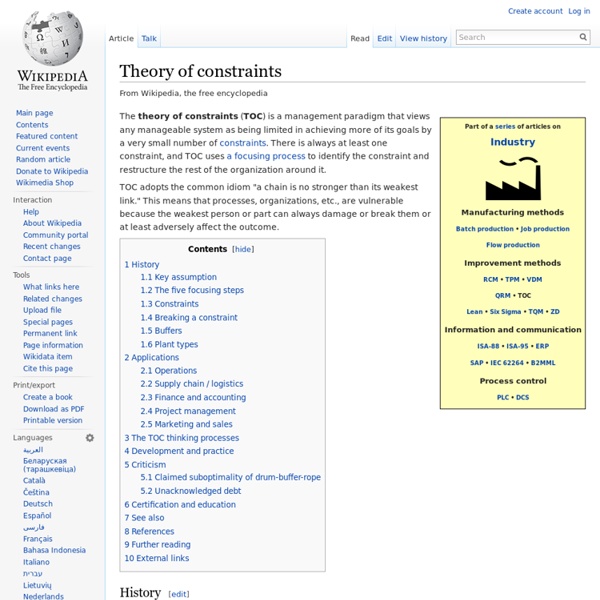 The theory of constraints (TOC) is a management paradigm that views any manageable system as being limited in achieving more of its goals by a very small number of constraints. There is always at least one constraint, and TOC uses a focusing process to identify the constraint and restructure the rest of the organization around it. TOC adopts the common idiom "a chain is no stronger than its weakest link." This means that processes, organizations, etc., are vulnerable because the weakest person or part can always damage or break them or at least adversely affect the outcome. History[edit] An earlier propagator of the concept was Wolfgang Mewes[2] in Germany with publications on power-oriented management theory (Machtorientierte Führungstheorie, 1963) and following with his Energo-Kybernetic System (EKS, 1971), later renamed Engpasskonzentrierte Strategie as a more advanced theory of bottlenecks. Key assumption[edit] The five focusing steps[edit] Constraints[edit] Breaking a constraint[edit]

What is Lean The core idea is to maximize customer value while minimizing waste. Simply, lean means creating more value for customers with fewer resources. A lean organization understands customer value and focuses its key processes to continuously increase it. To accomplish this, lean thinking changes the focus of management from optimizing separate technologies, assets, and vertical departments to optimizing the flow of products and services through entire value streams that flow horizontally across technologies, assets, and departments to customers. Eliminating waste along entire value streams, instead of at isolated points, creates processes that need less human effort, less space, less capital, and less time to make products and services at far less costs and with much fewer defects, compared with traditional business systems. Lean for Production and Services A popular misconception is that lean is suited only for manufacturing. Lean Thinking

The Science of Interstellar (9780393351378): Kip Thorne, Christopher Nolan: Books Business Apps: Flying Logic: That Would Be Illogical, Captain Some years ago in "A Not-at-All Foolish Consistency," 2002-09-10), I raved about Sciral Consistency, a simple but brilliantly effective application that gently reminds you of activities that need performance periodically. Now Consistency's author, Robert McNally, is back with a new program: Flying Logic. You probably don't remember this, but one of the first articles I ever wrote for TidBITS was about an application for charting logical arguments, MacEuclid (see "MacEuclid," 1992-11-23)). It was a thesis project, and was never developed further. You could learn about the Theory of Constraints and develop a diagram on paper, on a blackboard, or using a diagramming tool such as OmniGraffle (see "Connect the Dots with OmniGraffle," 2006-02-13); but Flying Logic has some important advantages. I don't think you can just pick up Flying Logic and start playing. As a simple example, I've made a document showing a big argument that our neighborhood association had last night.

Theory of Constraints Overview Introduction Let’s Start By Stopping For A Moment Slow down, block out the rest of the world for a moment, and take the time to consider the following. Have you ever found yourself in a situation where you were waiting for someone to provide you with something, something that you must work on, and in-turn, which you had to pass on to someone else? I doubt that there are very many who can’t relate to this. Universal or not, does it need to be like this? I hope to show you that, indeed, it does not need to be like this at all. What this short moment of reflection shows is that most of us already have a pretty good intuition for the concepts of dependency, variation, and an understanding of systems and therefore the necessary intuition to find the needed solutions. What Is Theory Of Constraints? Theory of Constraints is the invention of Dr Eliyahu Goldratt, an Israeli physicist, educator, and management specialist. (1) Companies that are already very successful (we aren’t making enough money). Why is this?

Total quality management Total quality management (TQM) consists of organization-wide efforts to install and make permanent a climate in which an organization continuously improves its ability to deliver high-quality products and services to customers. While there is no widely agreed-upon approach, TQM efforts typically draw heavily on the previously-developed tools and techniques of quality control. TQM enjoyed widespread attention during the late 1980s and early 1990s before being overshadowed by ISO 9000, Lean manufacturing, and Six Sigma. History[edit] In the late 1970s and early 1980s, the developed countries of North America and Western Europe suffered economically in the face of stiff competition from Japan's ability to produce high-quality goods at competitive cost. Development in the United States[edit] From the Navy, TQM spread throughout the US Federal Government, resulting in the following: Features[edit] The key concepts in the TQM effort undertaken by the Navy in the 1980s include:[11] Joseph M. [edit]

The Science of 'Interstellar': Look Beyond the Wormhole Christopher Nolan's sci-fi blockbuster, "Interstellar," is winning kudos for its true-to-Einstein depiction of a black hole as well as its off-the-planet exploration agenda. The movie tells the story of a failing Earth — and a last-gasp space mission that sends astronauts through an extradimensional portal known as a wormhole in hopes of finding a habitable haven for humanity amid alien stars. The film boasts Nolan, the mastermind behind "The Dark Knight Rises" and "Inception," as director and co-writer. Thorne has written a movie-themed book, "The Science of 'Interstellar,'" which is due for release just as the film is coming out. "Neither wormholes nor black holes have been depicted in any Hollywood movie in the way that they actually would appear," Thorne says in a behind-the-scenes featurette. But Sten Odenwald, an astronomer at the Virginia-based National Institute of Aerospace, says Thorne's conception of a wormhole still may not match up with reality. Start with the solar system

Russell L. Ackoff Russell Lincoln Ackoff (/ˈækɒf/; 12 February 1919 – 29 October 2009) was an American organizational theorist, consultant, and Anheuser-Busch Professor Emeritus of Management Science at the Wharton School, University of Pennsylvania. Ackoff was a pioneer in the field of operations research, systems thinking and management science. Biography[edit] Russell L. Ackoff was born on February 12, 1919 in Philadelphia to Jack and Fannie (Weitz) Ackoff.[1] He received his bachelor degree in architecture at the University of Pennsylvania in 1941. From 1947 to 1951 Ackoff was assistant professor in philosophy and mathematics at the Wayne State University. Nicholson and Myers (1998) report that, in the 1970s and 1980s, the Social Systems Sciences Program at the Wharton School was "noted for combining theory and practice, escaping disciplinary bounds, and driving students toward independent thought and action. Ackoff was awarded an honorary Doctor of Science at the University of Lancaster, UK in 1967.

Lean manufacturing Overview[edit] The difference between these two approaches is not the goal itself, but rather the prime approach to achieving it. The implementation of smooth flow exposes quality problems that already existed, and thus waste reduction naturally happens as a consequence. Both lean and TPS can be seen as a loosely connected set of potentially competing principles whose goal is cost reduction by the elimination of waste.[5] These principles include: Pull processing, Perfect first-time quality, Waste minimization, Continuous improvement, Flexibility, Building and maintaining a long term relationship with suppliers, Autonomation, Load leveling and Production flow and Visual control. Origins[edit] Lean implementation is therefore focused on getting the right things to the right place at the right time in the right quantity to achieve perfect work flow, while minimizing waste and being flexible and able to change. Lean aims to make the work simple enough to understand, do and manage.

The 2014 Gift Guide: What To Get Creatives (And Those Who Want To Be More Creative) Geese are fattening, old men are awaiting haypennies (whatever those are) in their hats, and Christmas (or whatever) is fast approaching. And while you almost certainly have great ideas for the boring people in your life (what up, gift card!), more creative friends/family members/co-workers require more consideration: their gifts have to be both genuinely useful and clever enough to make it clear that you know them well. To that end, we've assembled a can't-miss gift guide for the creative folks in your life, to ensure that they'll be inspired and equipped going into 2015.