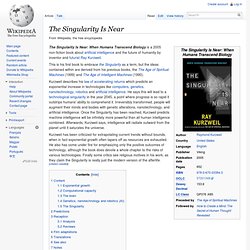 This is his first book to embrace the Singularity as a term, but the ideas contained within are derived from his previous books, the The Age of Spiritual Machines (1999) and The Age of Intelligent Machines (1990). Kurzweil describes his law of accelerating returns which predicts an exponential increase in technologies like computers, genetics, nanotechnology, robotics and artificial intelligence. He says this will lead to a technological singularity in the year 2045, a point where progress is so rapid it outstrips humans' ability to comprehend it.

Irreversibly transformed, people will augment their minds and bodies with genetic alterations, nanotechnology, and artificial intelligence. Content[edit] Exponential growth[edit] Computational capacity[edit] Ray Kurzweil’s Singularity: What it’s like to pursue immortality. Photo by Larry Busacca/Getty Images for Tribeca Film Festival Most of us accept that our lives are limited. 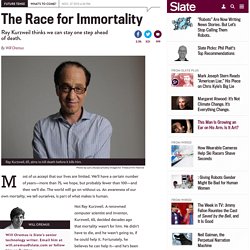 We'll have a certain number of years—more than 75, we hope, but probably fewer than 100—and then we'll die. The world will go on without us. An awareness of our own mortality, we tell ourselves, is part of what makes is human. Not Ray Kurzweil. “How long do you think you will live?” He rarely misses a beat in conversation, but he was quiet for just a moment before replying. In olden days, a man who insisted he could live forever would have been viewed as a strong candidate for either crucifixion or veneration. Where Spanish adventurers believed in the Fountain of Youth, Kurzweil believes in what the mathematician John von Neumann called the “singularity”—a point in human progress at which our machines become as smart as we are.

Kurzweil has spread his ideas widely and defended them energetically against critics, of whom there are many. It sounds like a lot of pressure. Ray Kurzweil: The Six Epochs of Technology Evolution. By Daniel Honan Sponsored by: 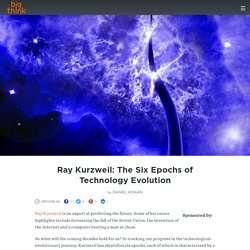 Google's Ray Kurzweil on the computers that will live in our brains. Shares of Google closed at $845.72 in New York today, up almost 2 percent. 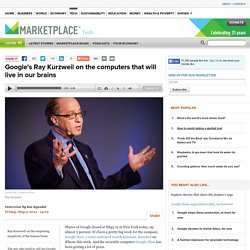 It's been a pretty big week for the company. Google Now, a voice-activated search assistant, launched on iPhone this week. And the wearable computer Google Glass has been getting a lot of press. Pretty much everything Google's doing is changing the way we think about and get our information. What's all that searching doing to us?

Futurist Kurzweil Says He’s Building AI into Google Search. The big announcements at Google’s I/O event in San Francisco Wednesday didn’t mention Web search, the technology that got the company started and made it so successful. 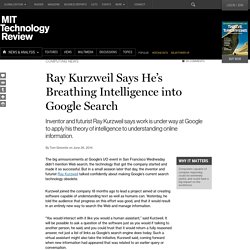 But in a small session later that day, the inventor and futurist Ray Kurzweil talked confidently about making Google’s current search technology obsolete. Kurzweil joined the company 18 months ago to lead a project aimed at creating software capable of understanding text as well as humans can. Yesterday, he told the audience that progress on this effort was good, and that it would result in an entirely new way to search the Web and manage information. “You would interact with it like you would a human assistant,” said Kurzweil. It will be possible to ask a question of the software just as you would if talking to another person, he said; and you could trust that it would return a fully reasoned answer, not just a list of links as Google’s search engine does today.

Kurzweil Responds: Don't Underestimate the Singularity. Although Paul Allen paraphrases my 2005 book, The Singularity Is Near, in the title of his essay (cowritten with his colleague Mark Greaves), it appears that he has not actually read the book. 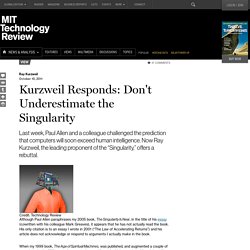 His only citation is to an essay I wrote in 2001 (“The Law of Accelerating Returns”) and his article does not acknowledge or respond to arguments I actually make in the book. When my 1999 book, The Age of Spiritual Machines, was published, and augmented a couple of years later by the 2001 essay, it generated several lines of criticism, such as Moore’s law will come to an end, hardware capability may be expanding exponentially but software is stuck in the mud, the brain is too complicated, there are capabilities in the brain that inherently cannot be replicated in software, and several others.

I specifically wrote The Singularity Is Near to respond to those critiques. Ray Kurzweil and the Brains Behind the Google Brain. By Big Think Editors Time was when Google engineers spent all their days counting links and ranking pages. 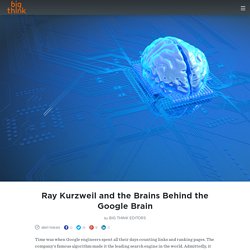 The company's famous algorithm made it the leading search engine in the world. Admittedly, it was far from perfect. That is why current efforts are aimed at developing ways for computers to read and understand natural language. Transgressive Man. There’s a scene near the opening of Transcendent Man, the 2009 documentary on futurist Ray Kurzweil, showing archive footage of the then-17-year-old’s appearance on panel show I’ve Got a Secret. 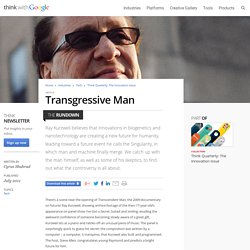 Suited and smiling, exuding the awkward confidence of someone becoming slowly aware of a great gift, Kurzweil sits at a piano and rattles off an unusual piece of music. The panel is surprisingly quick to guess his secret: the composition was written by a computer – a computer, it transpires, that Kurzweil also built and programmed. The host, Steve Allen, congratulates young Raymond and predicts a bright future for him.