How are people affected by floods?

List of deadliest floods. 2005 levee failures in Greater New Orleans. On 29 August 2005 there were over 50 failures of the levees and flood walls protecting New Orleans, Louisiana, and its suburbs following passage of Hurricane Katrina and landfall in Mississippi. 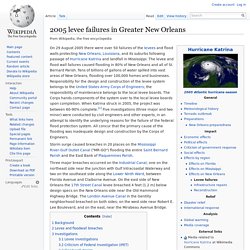 The levee and flood wall failures caused flooding in 80% of New Orleans and all of St. Bernard Parish. Tens of billions of gallons of water spilled into vast areas of New Orleans, flooding over 100,000 homes and businesses. Responsibility for the design and construction of the levee system belongs to the United States Army Corps of Engineers; the responsibility of maintenance belongs to the local levee boards. The Corps hands components of the system over to the local levee boards upon completion. Storm surge caused breaches in 20 places on the Mississippi River-Gulf Outlet Canal ("MR-GO") flooding the entire Saint Bernard Parish and the East Bank of Plaquemines Parish. Background[edit] Hurricane Katrina (2005) Nova Hurricane Katrina The Storm That Drowned A City. Hurricane Katrina (full video) When The Levees Broke: A Requiem in Four Parts - Parts I and II. 8/29/2005 Hurricane Katrina, New Orleans, LA - Video on Canal Street - Katrina Raw Master 16. 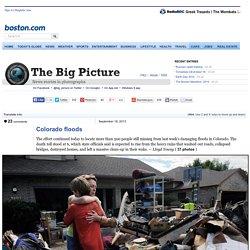 Balkans flooding. Mississippi River flooding. Flooding in Britain. Deadly flooding in India and Pakistan. Afghanistan landslide: Rescuers give up hope of survivors. The short - but eventful - life of Ike. Flooding in Europe. Hurricane Sandy: The Superstorm. The wake of Typhoon Bopha: Philippines. Cleanup begins after massive flooding in Manila. Relentless rains submerged at least a third to one half of the sprawling Philippine capital of Manila, triggering a landslide that killed nine people and sent emergency crews scrambling to rescue tens of thousands of residents. 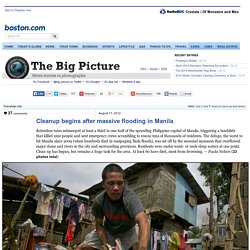 The deluge, the worst to hit Manila since 2009 (when hundreds died in rampaging flash floods), was set off by the seasonal monsoon that overflowed major dams and rivers in the city and surrounding provinces. Residents were under waist- or neck-deep waters at one point. Clean up has begun, but remains a huge task for the area. At least 60 have died, most from drowning. -- Paula Nelson (23 photos total) Regie Pacheco shovels mud outside his home that was partially swept away in flash flooding in a low lying community hard hit by the flooding Aug. 12, 2012, Manila, Philippines. Thailand flood reaches Bangkok. Too much of a basic human need. Hurricane Irene. Hurricane Irene wound up by most estimates as one of the top ten most destructive and deadly hurricanes to hit the United States since 1980. 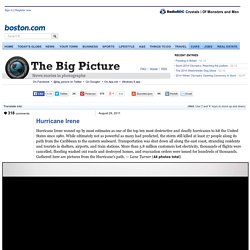 While ultimately not as powerful as many had predicted, the storm still killed at least 27 people along its path from the Caribbean to the eastern seaboard. Transportation was shut down all along the east coast, stranding residents and tourists in shelters, airports, and train stations. More than 5.8 million customers lost electricity, thousands of flights were cancelled, flooding washed out roads and destroyed homes, and evacuation orders were issued for hundreds of thousands. Gathered here are pictures from the Hurricane's path. -- Lane Turner (44 photos total) Billy Stinson comforts his daughter Erin Stinson as they sit on the steps where their cottage once stood on August 28, 2011 in Nags Head, N.C. Powerful storm pounds West Coast - The Big Picture. Powerful storm pounds West Coast A strong storm hit the West Coast this week, causing overflow of rivers and flooded freeways. 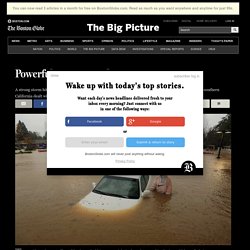 Seasonal flooding across eastern Australia has been widespread and devastating this spring - their wettest on record. 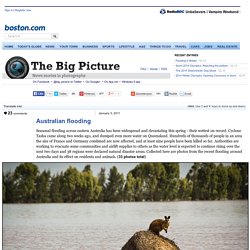 Cyclone Tasha came along two weeks ago, and dumped even more water on Queensland. Hundreds of thousands of people in an area the size of France and Germany combined are now affected, and at least nine people have been killed so far. Authorities are working to evacuate some communities and airlift supplies to others as the water level is expected to continue rising over the next two days and 38 regions were declared natural disaster areas. Flooding in Tennessee. Mississippi Floodwaters in Iowa. The rising Mississippi River has broken high-water records up and down the Iowa and Illinois shore, cresting as high as 12 feet above flood stage in some places. 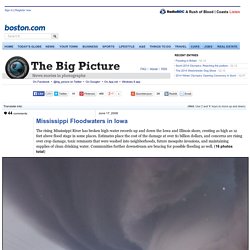 Estimates place the cost of the damage at over $1 billion dollars, and concerns are rising over crop damage, toxic remnants that were washed into neighborhoods, future mosquito invasions, and maintaining supplies of clean drinking water. Communities further downstream are bracing for possible flooding as well. (16 photos total) A huge tornado funnel cloud touches down in Orchard, Iowa, Tuesday, June 10, 2008 at 9:04 p.m. The Globe Gazette and Mitchell County Press News reported that Lori Mehmen of Orchard, took the photo from outside her front door. European flooding. Severe flooding in Pakistan. 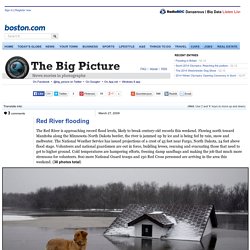 Flowing north toward Manitoba along the Minnesota-North Dakota border, the river is jammed up by ice and is being fed by rain, snow and meltwater. The National Weather Service has issued projections of a crest of 43 feet near Fargo, North Dakota, 24 feet above flood stage. Volunteers and national guardsmen are out in force, building levees, rescuing and evacuating those that need to get to higher ground. Cold temperatures are hampering efforts, freezing damp sandbags and making the job that much more strenuous for volunteers. 800 more National Guard troops and 150 Red Cross personnel are arriving in the area this weekend. (30 photos total)

Typhoon Morakot. Flooding in the Southeast.