BrainSCANr - Working Memory. Working Mem & Math Review. IDA_Working Memory and Math Article by Berch. Getting back to the White Queen’s arithmetic problem, while adding single digits should be comparatively easy for most typically achieving seven-and-a-half-year-olds (Alice’s age), it is evident from this example that one can excessively tax working memory by requiring a learner to simultaneously attend, store, and mentally process a rather large amount of information (albeit elementary in some sense) within a relatively short period of time. 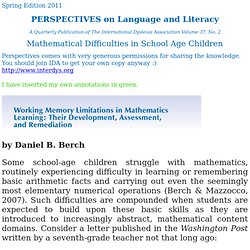 As Susan Gathercole, another leading researcher in this field has pointed out, overloading this fragile mental workspace can lead to “complete and catastrophic loss of information from working memory” (Gathercole, 2008, p. 382). Complete and catastrophic loss -- sadly, that's what happens all too often to math students. Obviously, no teacher would deliberately choose to overload his or her students’ working memory capacity. So diplomatically stated! There’s more to working memory than meets the eye. I’ve had several conversations on Twitter with Peter Blenkinsop about learning and the brain. 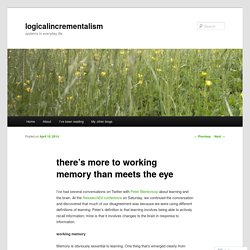 At the ResearchEd conference on Saturday, we continued the conversation and discovered that much of our disagreement was because we were using different definitions of learning. Peter’s definition is that learning involves being able to actively recall information; mine is that it involves changes to the brain in response to information. Applications of the Morris water maz... [Brain Res Brain Res Rev. 2001] 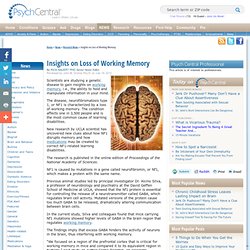 Grohol, Psy.D. on July 19, 2010 Scientists are studying a genetic disease to gain insights on working memory, i.e., the ability to hold and manipulate information in your mind. The disease, neurofibromatosis type 1, or NF1 is characterized by a loss of working memory. The condition affects one in 3,500 people and is the most common cause of learning disabilities. New research by UCLA scientist has uncovered new clues about how NF1 disrupts memory and how medications may be created to correct NF1-related learning disabilities. The research is published in the online edition of Proceedings of the National Academy of Sciences. NF1 is caused by mutations in a gene called neurofibromin, or Nf1, which makes a protein with the same name. Previous animal studies led by principal investigator Dr. Robust Short-Term Memory without Synaptic Learning. Citation: Johnson S, Marro J, Torres JJ (2013) Robust Short-Term Memory without Synaptic Learning. 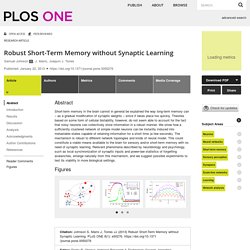 PLoS ONE 8(1): e50276. doi:10.1371/journal.pone.0050276 Editor: Dante R. Chialvo, National Research & Technology Council, Argentina Received: May 22, 2012; Accepted: October 23, 2012; Published: January 22, 2013 Copyright: © 2013 Johnson et al. Funding: This work was supported by Junta de Andalucía projects FQM-01505 and P09-FQM4682, by the joint Spanish Research Ministry (MEC) and the European Budget for the Regional Development (FEDER) project FIS2009-08451, and by the Granada Research of Excellence Initiative on Bio-Health (GREIB) traslational project GREIB.PT_2011_19 of the Spanish Science and Innovation Ministry (MICINN) “Campus of International Excellence.” Competing interests: The authors have declared that no competing interests exist. Introduction. Gone in 0.6 seconds: The encoding of motor memories depends on recent sensorimotor states. Human working memory is based on dynamic interaction networks in the brain. A research project of the Neuroscience Center of the University of Helsinki sheds light on the neuronal mechanisms sustaining memory traces of visual stimuli in the human brain. 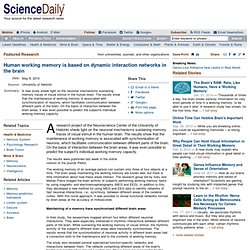 The results show that the maintenance of working memory is associated with synchronisation of neurons, which facilitates communication between different parts of the brain. On the basis of interaction between the brain areas, it was even possible to predict the subject's individual working memory capacity. The results were published last week in the online version of the journal PNAS. Digit Span - Cambridge Brain Sciences. The digit span task exercises your verbal working memory. 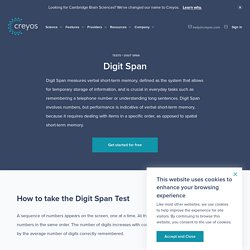 Scientists refer to working memory as the cognitive system that allows the temporary storage and manipulation of information. According to one influential cognitive theory, this system has specialised components, one of which, the 'phonological loop', underlies verbal working memory abilities (Baddeley & Hitch 1974). The phonological loop is comprised of a verbal storage system and a rehearsal system. If you do this task, you may find yourself mentally rehearsing the string of digits as they appeared on screen; this is the rehearsal system in action. It allows the visual inputs to be recoded so that they can enter your short term verbal store and it also refreshes decaying representations (that is, any item that is about to be forgotten). Verbal working memory is involved in many everyday tasks, from remembering your friend's telephone number while you enter it into your phone, to understanding long and difficult sentences.