Tourette Syndrome, Tic Disorders Are Highly Heritable. Tic disorders are among the most heritable neuropsychiatric conditions, concluded researchers who explored heritability of tic disorders, such as Tourette syndrome, in Swedish families. 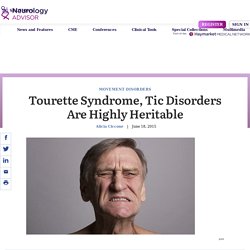 While long thought to be of strong familial and heritable nature, research on such attributes of tic disorders has been lacking. Only recently are more efforts being made to look closely at genetics. In this study, David Mataix-Cols, PhD, of the Karolinska Institutet in Stockholm, and colleagues estimated heritability based on two Swedish population-based registers, in which they identified 4,826 people diagnosed with Tourette syndrome or another chronic tic disorder from 1969 through 2009.

Of those diagnosed with a tic disorder, 72.8% had at least one lifetime psychiatric comorbidity. Interrogating the genetic determinants of Tourette syndrome and other tic disorders through genome-wide association studies. Clinical Features That Evoke the Concept of Disinhibition in Tourette Syndrome. A Review of the Current Treatment of Tourette Syndrome. White matter in learning, cognition and psychiatric disorders. 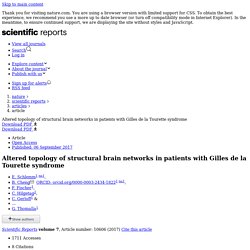 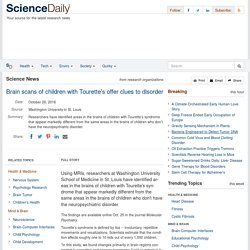 Louis have identified areas in the brains of children with Tourette's syndrome that appear markedly different from the same areas in the brains of children who don't have the neuropsychiatric disorder. The findings are available online Oct. 25 in the journal Molecular Psychiatry. Tourette's syndrome is defined by tics -- involuntary, repetitive movements and vocalizations. Scientists estimate that the condition affects roughly one to 10 kids out of every 1,000 children. "In this study, we found changes primarily in brain regions connected to sensation and sensory processing,"said co-principal investigator Kevin J. Differences in those brain regions make sense, Black said, because many people with Tourette's explain that their tics occur mainly as a response to unusual sensations.

The gray matter is where the brain processes information. White matter acts like the brain's wiring. Tourette syndrome research highlights from 2017. Tourette Syndrome: A Disorder of the Social Decision-Making Network - PubMed. Tourette syndrome is a common neurodevelopmental disorder defined by characteristic involuntary movements, tics, with both motor and phonic components. 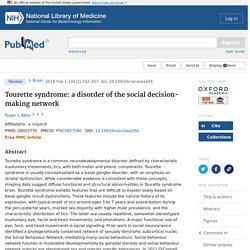 Tourette syndrome is usually conceptualized as a basal ganglia disorder, with an emphasis on striatal dysfunction. While considerable evidence is consistent with these concepts, imaging data suggest diffuse functional and structural abnormalities in Tourette syndrome brain. Tourette syndrome exhibits features that are difficult to explain solely based on basal ganglia circuit dysfunctions. These features include the natural history of tic expression, with typical onset of tics around ages 5 to 7 years and exacerbation during the peri-pubertal years, marked sex disparity with higher male prevalence, and the characteristic distribution of tics. 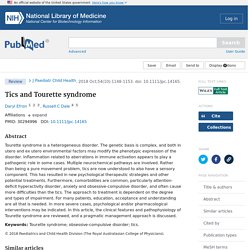 The genetic basis is complex, and both in utero and ex utero environmental factors may modify the phenotypic expression of the disorder. Inflammation related to aberrations in immune activation appears to play a pathogenic role in some cases. Multiple neurochemical pathways are involved. Rather than being a pure movement problem, tics are now understood to also have a sensory component. This has resulted in new psychological therapeutic strategies and other potential treatments. The Colorful Spectrum of Tourette Syndrome and Its Medical, Surgical and Behavioral Therapies - PubMed.

Tourette Syndrome and Other Chronic Tic Disorders: An Update on Clinical Management - PubMed. The management of Tourette syndrome (TS) and other chronic tic disorders occurs in multiple stages and begins with comprehensive assessment and complex psychoeducation. 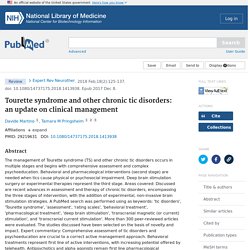 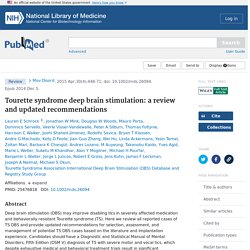 Here we review all reported cases of TS DBS and provide updated recommendations for selection, assessment, and management of potential TS DBS cases based on the literature and implantation experience. Candidates should have a Diagnostic and Statistical Manual of Mental Disorders, Fifth Edition (DSM V) diagnosis of TS with severe motor and vocal tics, which despite exhaustive medical and behavioral treatment trials result in significant impairment. Deep brain stimulation should be offered to patients only by experienced DBS centers after evaluation by a multidisciplinary team. 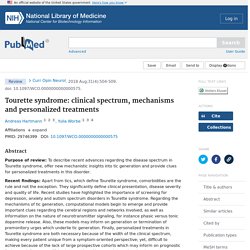 Recent findings: Apart from tics, which define Tourette syndrome, comorbidities are the rule and not the exception. They significantly define clinical presentation, disease severity and quality of life. Recent studies have highlighted the importance of screening for depression, anxiety and autism spectrum disorders in Tourette syndrome. Regarding the mechanisms of tic generation, computational models begin to emerge and provide important clues regarding the cerebral regions and networks involved, as well as information on the nature of neurotransmitter signaling, for instance phasic versus tonic dopamine release.

Also, these models may inform on generation or termination of premonitory urges which underlie tic generation. Understanding the Impact of Diet and Nutrition on Symptoms of Tourette Syndrome: A Scoping Review - PubMed. Anecdotal reports frequently suggest some dietary involvement in the maintenance of tics in children with Tourette syndrome (TS). 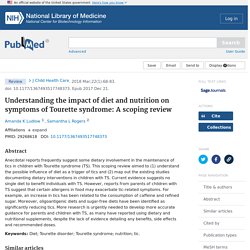 This scoping review aimed to (1) understand the possible influence of diet as a trigger of tics and (2) map out the existing studies documenting dietary interventions in children with TS. Current evidence suggests no single diet to benefit individuals with TS. However, reports from parents of children with TS suggest that certain allergens in food may exacerbate tic-related symptoms. Tourette Syndrome: Update. Alterations in the Nervous System and Gut Microbiota after β-Hemolytic Streptococcus Group A Infection—Characteristics and Diagnostic Criteria of PANDAS Recognition. Tourette's syndrome: a cross sectional study to examine the PANDAS hypothesis. Tourette Syndrome Fact Sheet.