The history of germ theory in the College collections. Marcus Terentius Varro (116–27 bc)De re rusticaVenice, 1514 The idea that certain diseases were caused by minute living creatures invisible to the human eye goes back more than 2,000 years. 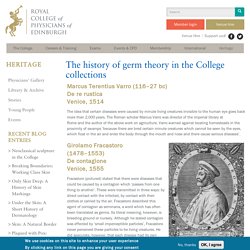 The Roman scholar Marcus Varro was director of the imperial library atRome and the author of the above work on agriculture. Varro warned against locating homesteads in the proximity of swamps ‘because there are bred certain minute creatures which cannot be seen by the eyes,which float in the air and enter the body through the mouth and nose and there cause serious diseases’. Girolamo Fracastoro(1478–1553)De contagioneVenice, 1555 Fracastoro (pictured) stated that there were diseases that could be caused by a contagion which ‘passes from one thing to another’. 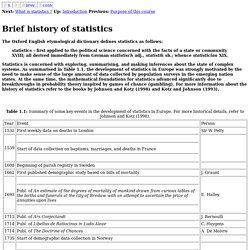 Up: Introduction Previous: Purpose of this course The Oxford English etymological dictionary defines statistics as follows: statistics - first applied to the political science concerned with the facts of a state or community XVIII; all derived immediately from German statistisch adj., statistik sb.; whence statistician XIX.

Statistics is concerned with exploring, summarising, and making inferences about the state of complex systems. Earliest Known Uses of Some of the Words of Mathematics (S) Last revision: Sept. 13, 2019 ST. 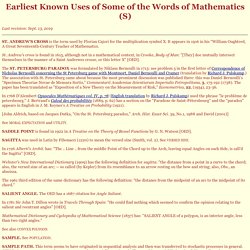 ANDREW’S CROSS is the term used by Florian Cajori for the multiplication symbol X. It appears in 1916 in his "William Oughtred, A Great Seventeenth-Century Teacher of Mathematics. St. Andrew’s cross is found in 1615, although not in a mathematical context, in Crooke, Body of Man: "[They] doe mutually intersect themselues in the manner of a Saint Andrewes crosse, or this letter X" [OED].

The ST. In 1768 D'Alembert Opuscules Mathématiques vol. [John Aldrich, based on Jacques Dutka, "On the St. See MORAL EXPECTATION and UTILITY. Statistics history. Earliest Known Uses of Some of the Words of Mathematics (S) The Binary System Was Created Long Before Leibniz. By Herbert Bruderer October 10, 2017 Comments In numerous, and even more recent, writings, the universal scholar Gottfried Wilhelm Leibniz is referred to as the discoverer or inventor of the binary system. 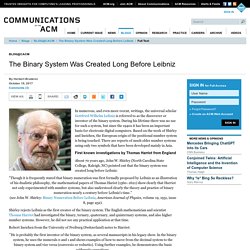 During his lifetime there was no use for such a system, but since the 1940s it has been an important basis for electronic digital computers. Based on the work of Shirley and Ineichen, the European origin of the positional number system is being touched. There are reports of much older number systems using only two symbols that have been developed mainly in Asia. First known investigations by Thomas Harriot from England About 70 years ago, John W. 3,700-year-old Babylonian tablet rewrites the history of maths - and shows the Greeks did not develop trigonometry. Seeing human lives in spreadsheets: The work of Hans Rosling (1948–2017) – The BMJ. Hans Rosling died last Tuesday (7 February 2017) at the age of 68, as the Gapminder Foundation—which he co-founded—announced. 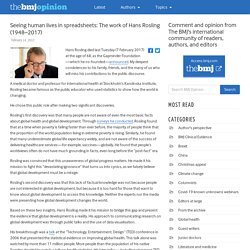 My deepest condolences to his family, friends, and the many of us who will miss his contributions to the public discourse. A medical doctor and professor for international health at Stockholm’s Karolinska Institute, Rosling became famous as the public educator who used statistics to show how the world is changing. He chose this public role after making two significant discoveries. Rosling’s first discovery was that many people are not aware of even the most basic facts about global health and global development.

Through surveys he conducted, Rosling found that at a time when poverty is falling faster than ever before, the majority of people think that the proportion of the world population living in extreme poverty is rising. Rosling was convinced that this unawareness of global progress matters. 0411418. History of Statistics. Link to Departmental Home Page. 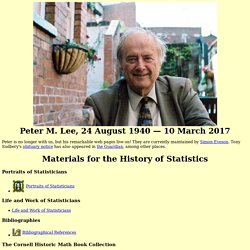 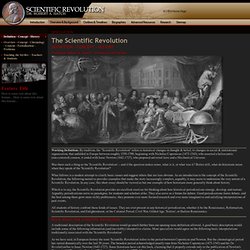 Hatch - University of Florida Working Definition: By tradition, the "Scientific Revolution" refers to historical changes in thought & belief, to changes in social & institutional organization, that unfolded in Europe between roughly 1550-1700; beginning with Nicholas Copernicus (1473-1543), who asserted a heliocentric (sun-centered) cosmos, it ended with Isaac Newton (1642-1727), who proposed universal laws and a Mechanical Universe. Was there such a thing as the 'Scientific Revolution' -- and if the question makes sense, what is it, or what was it? Better still, what do historians mean when they speak of the 'Scientific Revolution'? What follows is a modest attempt to clarify basic issues and suggest others that are less obvious. Which is to say, the Scientific Revolution provides an excellent exercise for thinking about how historical periodizations emerge, develop, and mature. 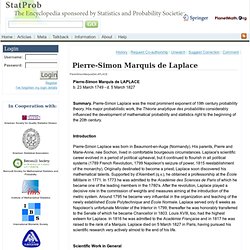