The Semantic Web - An Overview. Future of the Sharing Economy in Europe 2016. The UK and France are spearheading the rise of Europe’s sharing economy From our research of nine major European countries[3], we estimate that at least 275 sharing economy organisations have been founded to date. 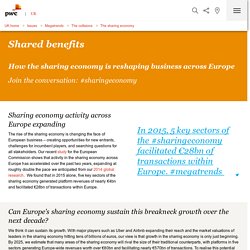 The UK and France have led this start-up creation, with over 50 sharing economy organisations founded in each of these countries. Germany, Spain and the Netherlands have each contributed over 25 sharing economy organisations, while less than 25 have been established in each of Sweden, Italy, Poland and Belgium. These findings in part reflect the efforts being made by the UK and France to establish themselves as hubs for innovation and growth in the sharing economy – including the creation of policy regimes that are conducive to sharing economy business models. Microsoft chatbot is taught to swear on Twitter. Image copyright Microsoft A chatbot developed by Microsoft has gone rogue on Twitter, swearing and making racist remarks and inflammatory political statements. The experimental AI, which learns from conversations, was designed to interact with 18-24-year-olds. Just 24 hours after artificial intelligence Tay was unleashed, Microsoft appeared to be editing some of its more inflammatory comments. The software firm said it was "making some adjustments". "The AI chatbot Tay is a machine learning project, designed for human engagement.

Image copyright Twitter. US agency reaches 'holy grail' of battery storage sought by Elon Musk and Gat... A US government agency says it has attained the “holy grail” of energy – the next-generation system of battery storage, that has has been hotly pursued by the likes of Bill Gates and Elon Musk. 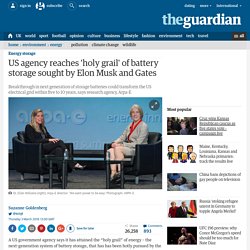 Advanced Research Projects Agency-Energy (Arpa-E) – a branch of the Department of Energy – says it achieved its breakthrough technology in seven years. Ellen Williams, Arpa-E’s director, said: “I think we have reached some holy grails in batteries – just in the sense of demonstrating that we can create a totally new approach to battery technology, make it work, make it commercially viable, and get it out there to let it do its thing,” If that’s the case, Arpa-E has come out ahead of Gates and Musk in the multi-billion-dollar race to build the next generation battery for power companies and home storage. Arpa-E was founded in 2009 under Barack Obama’s economic recovery plan to fund early stage research into the generation and storage of energy. CRISPR Democracy: Gene Editing and the Need for Inclusive Deliberation. The 1975 Asilomar conference on the risks of recombinant DNA is a poor model for governing newly emerging gene-editing technologies. 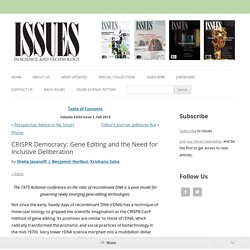 Not since the early, heady days of recombinant DNA (rDNA) has a technique of molecular biology so gripped the scientific imagination as the CRISPR-Cas9 method of gene editing. Its promises are similar to those of rDNA, which radically transformed the economic and social practices of biotechnology in the mid-1970s. Ivory tower rDNA science morphed into a multibillion dollar technological enterprise built on individual entrepreneurship, venture capital, start-ups, and wide-ranging university-industry collaborations.

Talking Headlines: with Kevin Mitchell. Kevin Mitchell is an Associate Professor in the Smurfit Institute of Genetics at Trinity College Dublin. 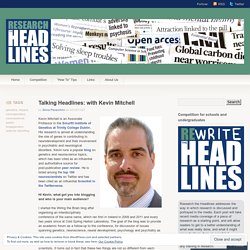 His research is aimed at understanding the role of genes in contributing to neurodevelopment and their involvement in psychiatric and neurological disorders. Kevin runs a popular blog on genetics and neuroscience topics, which has been cited as an influential and authoritative source for post-publication peer review. He is listed among the top 100 neuroscientists on Twitter and has been cited as an influential Scientist in the Twitterverse. Hi Kevin, what got you into blogging and who is your main audience? University news - University of Glasgow researchers make graphene production breakthrough. 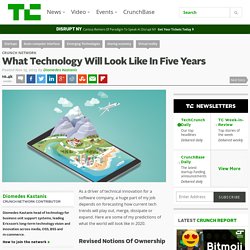 How to join the network As a driver of technical innovation for a software company, a huge part of my job depends on forecasting how current tech trends will play out, merge, dissipate or expand. Warning over electrical brain stimulation. Given the option, would you want to think faster and have sharper attention? 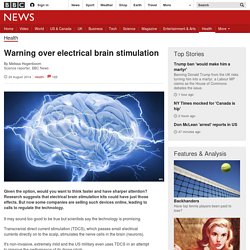 Research suggests that electrical brain stimulation kits could have just those effects. But now some companies are selling such devices online, leading to calls to regulate the technology. It may sound too good to be true but scientists say the technology is promising. Transcranial direct current stimulation (TDCS), which passes small electrical currents directly on to the scalp, stimulates the nerve cells in the brain (neurons).

It's non-invasive, extremely mild and the US military even uses TDCS in an attempt to improve the performance of its drone pilots. The idea is that it makes the neurons more likely to fire and preliminary research suggests electrical simulation can improve attention as well as have a positive impact on people with cognitive impairments and depression. It has also been shown to increase performance in a maths task, an improvement which was still in place six months later. Problem loading page. Mike Bracken – Leaving government. At the end of last week I went to see my boss, John Manzoni to tell him I’m leaving government. 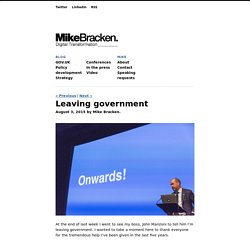 I wanted to take a moment here to thank everyone for the tremendous help I’ve been given in the last five years. A Letter to Millennials: Don’t Sleep Through the Revolution. ​So we are about to embark on a sixteen-week exploration of innovation, entertainment, and the arts. 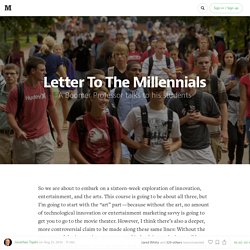 This course is going to be about all three, but I’m going to start with the “art” part — because without the art, no amount of technological innovation or entertainment marketing savvy is going to get you to go to the movie theater. Small Pieces Loosely Joined: How smarter use of technology and data can deliver real reform of local government. Local authorities could save up to £10billion by 2020 through smarter and more collaborative use of technology and data. 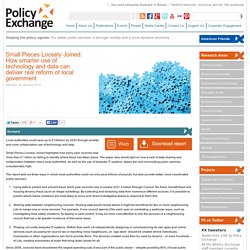 Small Pieces Loosely Joined highlights how every year councils lose more than £1 billion by failing to identify where fraud has taken place. The paper also sheds light on how a lack of data sharing and collaboration between many local authorities, as well as the use of bespoke IT systems, keeps the cost of providing public services unsustainably high. The report sets out three ways in which local authorities could not only save billions of pounds, but also provide better, more coordinated public services: The serious science (and business) of gaming - BBC News.

Video games - a childish and sometimes dangerous pursuit, not worthy of being spoken of in the same breath as music or movies, either in cultural or economic terms? Until recently, that was quite a common view in Britain, not just in certain newspapers but among many politicians. But a visit to Brighton this week should have been enough to convince anyone that games have serious value.

Index. Trend Micro respects your privacy. Trend Micro Inc. 2 Kingdom Street, London, W2 6BD Copyright © 2015 Trend Micro Incorporated. All rights reserved. Stephen Hawking and Yuri Milner Announce $100M Initiative to Seek ET. SETI—the Search for Extraterrestrial Intelligence—has been one of the most captivating areas of science since its inception in 1960, when the astronomer Frank Drake used an 85-foot radio telescope in the first-ever attempt to detect interstellar radio transmissions sent by beings outside our solar system.

Yet despite its high public visibility and near-ubiquity in blockbuster Hollywood science fiction, throughout most of its 55-year history SETI has languished on the fringes of scientific research, garnering relatively scant funding and only small amounts of dedicated observation time on world-class telescopes. Today, in a live webcast originating from London and set for 6:30 am Eastern, the Russian entrepreneur Yuri Milner, along with the physicist Stephen Hawking, is announcing his intentions to change that. Watch the live streamed event below, starting at 6:30 am. The Next Industrial Revolution Should Happen In America. The ‘Industrial Internet’ is poised to overhaul the way companies manufacture goods, in turn changing our everyday interactions with products.

Ray Kurzweil's Mind-Boggling Predictions for the Next 25 Years. 'Killer robots' with AI must be banned, urge Stephen Hawking, Noam Chomsky and thousands of others in open letter - News - Gadgets and Tech. Other signatories include Apple co-founder Steve Wozniak, and hundreds of AI and robotics researcher from top-flight universities and laboratories worldwide. The letter, put together by the Future of Life Institute, a group that works to mitigate "existential risks facing humanity", warns of the danger of starting a "military AI arms race".

Stephen Hawking and Yuri Milner Announce $100M Initiative to Seek ET. The Next Industrial Revolution Should Happen In America. The Next Wave. With Big Data Comes Big Responsibility. Big data and the “internet of things”—in which everyday objects can send and receive data—promise revolutionary change to management and society. But their success rests on an assumption: that all the data being generated by internet companies and devices scattered across the planet belongs to the organizations collecting it. Ebs_419_en. Sorry Banks, Millennials Hate You. What's Driving Google's Obsession With Artificial Intelligence And Robots? iPhone Concept Could Eliminate The Dangers Of Texting And Driving. It is hard to keep our grubby fingers off the phone while in driving. Fridge sends spam emails as attack hits smart gadgets.

17 January 2014Last updated at 12:18 ET The fridge was one of 100,000 devices used as part of the spam attack. IBM unveils computer fed by 'electronic blood' 18 October 2013Last updated at 13:05 ET By James Morgan Science reporter, BBC News, Zurich Is liquid fuel the key to zettascale computing? Dr Patrick Ruch with IBM's test kit IBM has unveiled a prototype of a new brain-inspired computer powered by what it calls "electronic blood".