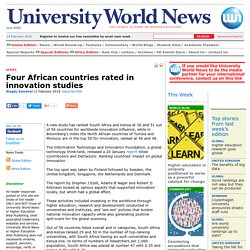 The Information Technology and Innovation Foundation, a global technology think-tank, released a 20 January report titled Contributors and Detractors: Ranking countries’ impact on global innovation. The top spot was taken by Finland followed by Sweden, the United Kingdom, Singapore, the Netherlands and Denmark. The report by Stephen J Ezell, Adams B Nager and Robert D Atkinson looked at various aspects that supported innovation locally, but which had a global effect. These activities included investing in the workforce through higher education, research and development conducted in universities and institutes, and 'win-win' policies that bolster national innovation capacity while also generating positive spill-overs for the global economy.

These young Africans are about to disrupt the way you ship from overseas to Africa. People travel everyday, especially Nigerians. 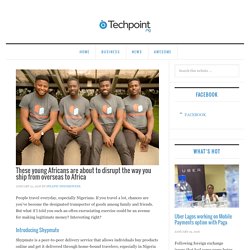 If you travel a lot, chances are you’ve become the designated transporter of goods among family and friends. But what if I told you such an often excruciating exercise could be an avenue for making legitimate money? Interesting right? Introducing Shypmate Shypmate is a peer-to-peer delivery service that allows individuals buy products online and get it delivered through home-bound travelers, especially in Nigeria and Ghana. In an exclusive interview with two members of the team (Chisom Ebinama and Perry Ogwuche) , Co-founder, Perry remarked: Perry Ogwuche “We traveled to the US for college and have been there ever since.

The founders, — Chisom Ebinama, Kwadwo Nyarko, Perry Ogwuche and Tochukwu Okoro — who have a uniquely mix-and-match Nationality (3 from Nigeria and 1 from Ghana) and area of expertise (3 with background in Engineering and 1 in the field of Business) are based in San Mateo, California USA where they all met. African Startups Are Defying The Global Tech Slowdown. BRCK Education By Lily Kuo | From Changing The African Conversation African startups may prove the exception to a slowdown in funding for tech companies around the world.Startups raised $27.3 billion globally, down from 30% from the previous quarter, according to the research firm CB Insights. 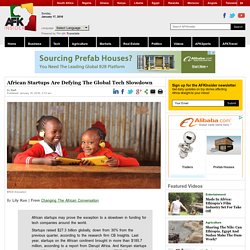 Last year, startups on the African continent brought in more than $185.7 million, according to a report from Disrupt Africa. And Kenyan startups especially saw their best year in fundraising since 2010. Kenyan startups raised over $47.4 million last year, according to the publication.Companies from Kenya’s so-called “Silicon Savannah” like M-Kopa; a solar energy provider for rural areas, Bitpesa; a bitcoin trading platform, and Kopo Kopo; a merchant payment system, attracted the bulk of investor attention. Nigeria gets Africa's first football pitch lit by players. By Afp Published: 11:14 GMT, 12 December 2015 | Updated: 11:14 GMT, 12 December 2015 Africa's first football pitch lit solely by the players' movements has been inaugurated in Lagos, the economic hub of power-starved Nigeria, at a ceremony attended by US-Senegalese rapper Akon. 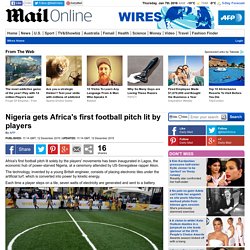 The technology, invented by a young British engineer, consists of placing electronic tiles under the artificial turf, which is converted into power by kinetic energy. Each time a player steps on a tile, seven watts of electricity are generated and sent to a battery. Rwanda: Meet the Brains Behind Rwanda's First Drones. By Moses Opobo At the 10th annual gorilla naming ceremony - Kwita Izina in Kinigi, Musanze in July 2014, one thing stood out: the presence of a drone camera hovering above the crowd and capturing images of events as they unfolded. 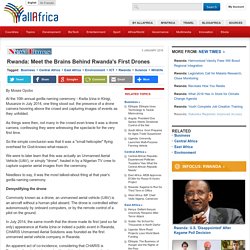 As things were then, not many in the crowd even knew it was a drone camera, confessing they were witnessing the spectacle for the very first time. So the simple conclusion was that it was a "small helicopter" flying overhead for God-knows-what-reason. We were to later learn that this was actually an Unmanned Aerial Vehicle (UAV), or simply "drone", hauled in by a Nigerian TV crew to capture superior aerial images from the ceremony. Needless to say, it was the most talked-about thing at that year's gorilla naming ceremony. 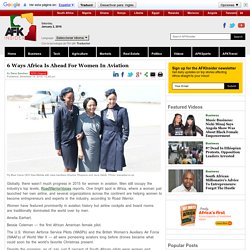 Photo: lowvelder.co.za Globally, there wasn’t much progress in 2015 for women in aviation. Men still occupy the industry’s top levels, RoadWarriorVoices reports. One bright spot is Africa, where a woman just launched her own airline, and several organizations across the continent are helping women to become entrepreneurs and experts in the industry, according to Road Warrior. 5 African e-courier startups to watch. Last mile logistics and delivery are the bane of many a business across Africa. 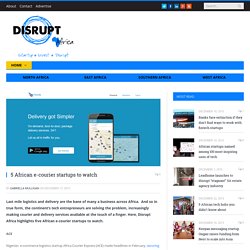 And so in true form, the continent’s tech entrepreneurs are solving the problem, increasingly making courier and delivery services available at the touch of a finger. Here, Disrupt Africa highlights five African e-courier startups to watch. Nigerian e-commerce logistics startup Africa Courier Express (ACE) made headlines in February, securing the first investment – to the tune of US$850,000 – of pan-African payments company Interswitch’s new US$10 million ‘ePayment Growth Fund’. 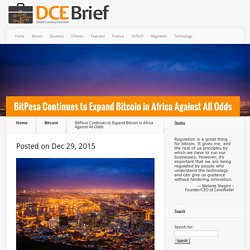 It is not a concept that many banks and national governments practice providing to their citizenry. You may get lip service to that effect, but the oppression, not the opportunity of the people is what usually takes place, at scale. Take Bitcoin in Africa, for example. Bitcoin is a natural fit, and could be a revolutionary technological change for the people of many African nations. Africa’s top science stories of first half of 2015 - SciDev.Net Sub-Saharan Africa. Our top stories of the first half of 2015 focussed on agriculture, environment and ICT, writes Bernard Appiah. 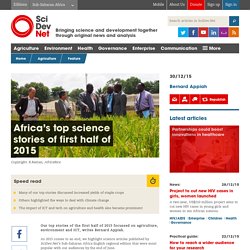 As 2015 comes to an end, we highlight science articles published by SciDev.Net’s Sub-Saharan Africa English regional edition that were most popular with our audiences by the end of June. Many top stories had agricultural ‘flavour’, which attests to the huge impact of agriculture in Sub-Saharan Africa, but other stories that many readers viewed included those relating to environment, information and communication technology (ICT), research and development (R&D), education and funding. Boost for staple crops Staple crops such as rice, bananas and root and tubers including cassava and potatoes received a major boost. For instance, one of our first stories of 2015 described a partnership for developing rice. Tunisia Becomes First Nation To Put Nation’s Currency on a Blockchain. Banks and private industry have gone hog-wild for blockchain technology, now that they understand what all the Bitcoin fuss is about. 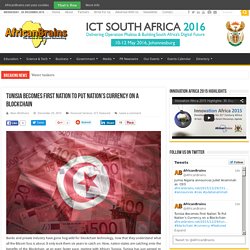 It only took them six years to catch on. Now, nation-states are catching onto the benefits of the Blockchain, at an even faster pace, starting with Africa’s Tunisia. Tunisia has just agreed to become the first nation to offer its national currency for transmittance through cryptographic technology. Nestled on the northern African coast between Libya to the east and Algeria to the west, south of the Mediterranean Sea and Italy, Tunisia supports over 10 million citizens. Senegalese Invents Mobile Software that helps prevent bus fare fraud. Can a New Mapping Tool Protect Indigenous Land Rights? European nations looking to slow the flood of migrants washing into their countries are considering an array of potential legal roadblocks. Slovenia has decided to build literal ones. Prime Minister Miro Cerar announced Tuesday that his government planned to implement “temporary technical obstacles” on its border with Croatia to make it harder for asylum-seekers to pass through the Balkans en route to other destinations in Europe.

“These obstacles, including fences if needed, will have the objective of directing migrants towards the border crossings,” Cerar told reporters in the Slovenian capital of Ljubljana Tuesday. “We are not closing our borders.” According to Cerar, the sheer number of refugees pushing their way into the country could spark a humanitarian disaster. Many of those passing through the Balkan peninsula have no intention of staying and are instead heading toward Germany, where officials expect to receive at least 800,000 asylum applications this year.

Smartphones help Tanzanian women secure land rights. UA grad student hopes to use phone tech for water tests. It’s not uncommon to see a Tanzanian man herding cattle and jabbering into a cellphone, Katie McCracken says. During her year of volunteering with the Peace Corps in the African country, McCracken, 24, learned that even if computer access does not exist, cellphones — and, increasingly, smartphones — are everywhere.

That observation, and several others, has influenced her lab work back at the University of Arizona in water resources engineering. Mobile Phone Data Used to Predict Poverty in Rwanda. Anonymized data generated by mobile phones has been used by researchers to show how wealthy or poor people are. Personal information that mobile devices gather such as a person’s location often gets anonymized by stripping it of names, home addresses, phone numbers, and other obvious identifying details. Such metadata often get shared, and underlies popular services such as Google’s real-time monitoring of road traffic.

Scientists at the University of Washington in Seattle and the University of California, Berkeley, analyzed data from billions of phone calls and text messages from 1.5 million subscribers to Rwanda’s largest mobile phone network. Nigerien, Malian Soldiers Aid U.S. Army's Translation Tech. ABERDEEN PROVING GROUND, Md. -- The U.S. Army is testing and upgrading a language-translation program by training with African soldiers, officials said. Recording foreign Soldiers' speech and providing the data to Army researchers is key to improving the technology, said Maj. Eddie Strimel and Bill Bergen, the Field Assistance in Science and Technology, or FAST, advisors assigned to U.S.

Meet South Africa's youngest millionaire only at 23. Africans can now charge mobile phones using mud. Mobile app that checks credit worthiness. Les inventeurs Marocains célèbrent l’Innovation. How this 22-year-old aims to shake up online shopping in Cameroon. Le top 50 des centres de recherche africains selon Webometrics. That Forbes rich list: If you want to be an African billionaire, this is what you should NOT do. Africa: U.S. Legal Loop-Hole Creates a Business Model for Zenoradio's Phone-Up Radio Service in Africa and Elsewhere. Algeria: Two Space Observatories to Be Built in Algeria to Boost Scientific Research. Africa gets Crowdfunding Association.