Geography of the Ocean and the Structure of Planet Ocean. The Global Ocean The five oceans from smallest to largest are: the Arctic, Southern, Indian, Atlantic and Pacific. 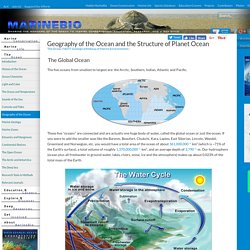 These five "oceans" are connected and are actually one huge body of water, called the global ocean or just the ocean. If you were to add the smaller seas like the Barents, Beaufort, Chukchi, Kara, Laptev, East Siberian, Lincoln, Wandel, Greenland and Norwegian, etc. you would have a total area of the ocean of about 361,000,000. Deepest Part of the Ocean - Deepest Ocean Trench. Home » Records » Deepest Point in the Oceans The Challenger Deep in the Mariana Trench is the deepest known location in Earth's oceans. 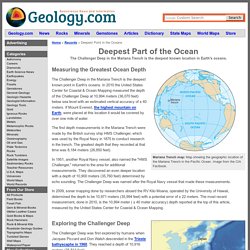 Mariana Trench map: Map showing the geographic location of the Mariana Trench in the Pacific Ocean. Image from the CIA Factbook. Measuring the Greatest Ocean Depth The Challenger Deep in the Mariana Trench is the deepest known point in Earth's oceans. Australia's Great Natural Wonder. 10 Must-See Places In Your Lifetime - the Brofessional. History of the Ocean. When the Earth formed about 4.5 billion years ago... 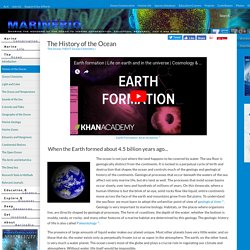 The ocean is not just where the land happens to be covered by water. The sea floor is geologically distinct from the continents. Oceans of the world map and information - 5 Oceans, World Oceans. Here's the Most Complete Ocean Floor Map Ever Made. Ocean - National Geographic Society. The ocean covers 70 percent of the Earth's surface. 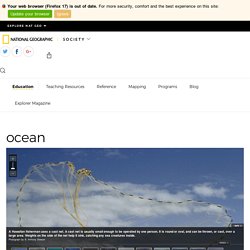 It contains about 1.35 billion cubic kilometers (324 million cubic miles) of water, which is about 97 percent of all the water on Earth. The ocean makes all life on Earth possible, and makes the planet appear blue when viewed from space.