Green Energy Hydrogen Energy Storage System by LAVO™ Australia. Crowd oil: Fuels from air-conditioning systems. Researchers at the Karlsruhe Institute of Technology (KIT) and the University of Toronto have proposed a method enabling air conditioning and ventilation systems to produce synthetic fuels from carbon dioxide (CO2) and water from the ambient air. 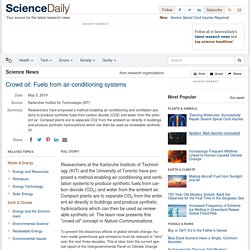 Compact plants are to separate CO2 from the ambient air directly in buildings and produce synthetic hydrocarbons which can then be used as renewable synthetic oil. The team now presents this "crowd oil" concept in Nature Communications. How It Works - NovoNutrients. Silk Reimagined. Capture CO₂ Blue Frontier. Home – Econic. POWERPASTE, a high-density, safe, and easily transportable hydrogen energy fuel - Inceptive Mind. The future car could be powered by a hydrogen fuel cell, one of the most promising alternatives to replace gasoline and other hydrocarbon-based fuels. 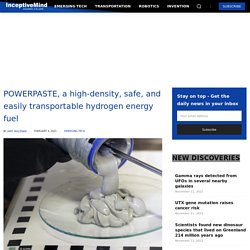 However, hydrogen for fuel cells is extremely volatile and therefore difficult to store and transport. Thus, before hydrogen technology can be widely used, various obstacles must be overcome. And one of the most difficult is hydrogen storage. Researchers have now succeeded in turning the gas into an easy-to-use paste. A team from the Fraunhofer Institute for Manufacturing Technology and Advanced Materials IFAM in Dresden has developed a hydrogen-containing paste that stores hydrogen energy at ten times the lithium battery‘s density. Remora - Carbon Capture for Semi-Trucks. Carbon Capture and Storage to Reach Net Zero.

Asbestos could be a powerful weapon against climate change (you read that right) On a scorching day this August, Caleb Woodall wielded his shovel like a spear, stabbing it into the hardened crust of an asbestos-filled pit near Coalinga, California. 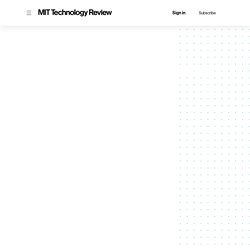 Woodall, a graduate student at Worcester Polytechnic Institute in Massachusetts, was digging out samples from an asbestos mine that’s been shuttered since 1980, a Superfund site on the highest peak in the state’s Diablo Range. He extracted pounds of the material from several locations across San Benito Mountain, shoveled them into Ziploc bags, and shipped them to a pair of labs for analysis. 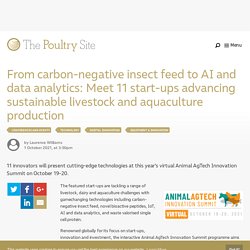 Renowned globally for its focus on start-ups, innovation and investment, the interactive Animal AgTech Innovation Summit programme aims to accelerate opportunities for innovators as they raise their profile and connect with potential investors and partners among its 350+ global industry decision-makers. Meet the companies taking the digital stage during the Start-Up Pitching Sessions and showcasing their solutions in the Virtual Exhibition: Investment - Carbon Direct. Bring your brand purpose to life. ARTIFICIAL TREES COULD OFFSET CARBON DIOXIDE EMISSIONS – Climate Change. By Janice Cantieri – Physicist and engineer Klaus Lackner makes artificial trees – but not the kind that decorate living rooms and lobbies. 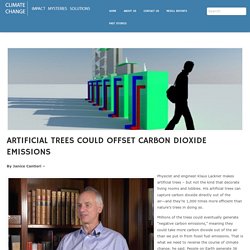 His artificial trees can capture carbon dioxide directly out of the air—and they’re 1,000 times more efficient than nature’s trees in doing so. Millions of the trees could eventually generate “negative carbon emissions,” meaning they could take more carbon dioxide out of the air than we put in from fossil fuel emissions. New zero-net-carbon-technology advances carbon-dioxide-to-ethanol conversion. In a new study, scientists realize that mixing cesium, copper, and zinc oxide in a close-contact configuration catalyzes a reaction pathway that transforms carbon dioxide (CO2) into ethanol (C2H6O). 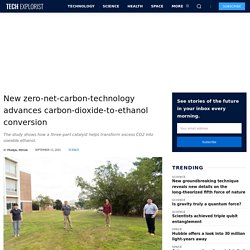 Smaller players can help to reduce their energy consumption, or switch to renewable energy sources. A good start would be to look towards using cloud technology – ofer2

HOME INTO A TREE 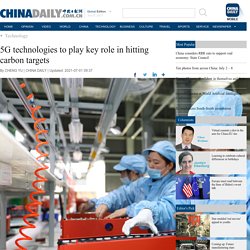 "5G technologies can be applied to power battery packs to form smart batteries that are able to manage electricity and heat in an intelligent way," said Wu Feng, an academician at the Chinese Academy of Engineering. "With such smart management, the battery's total life span will be greatly increased to further support large-scale energy storage, especially for clean energy," Wu said in Beijing on Tuesday at a symposium on 5G and carbon neutrality ahead of the World 5G Convention, which will be held in the capital in August.

"With 5G, we can control the power system in a more timely and accurate way to minimize uncertainties. The world's whitest paint can cool your house — and the Earth - Freethink. A newly created paint reflects up to 98.1% of sunlight, making it the whitest white paint ever invented — and potentially a new weapon in the fight against global warming. 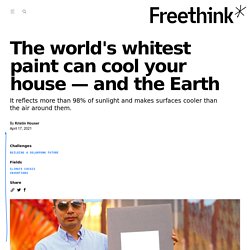 “If you were to use this paint to cover a roof area of about 1,000 square feet, we estimate that you could get a cooling power of 10 kilowatts,” Purdue University researcher Xiulin Ruan said in a press release. “That’s more powerful than the central air conditioners used by most houses.” The challenge: The world is currently stuck in a dangerous cycle. 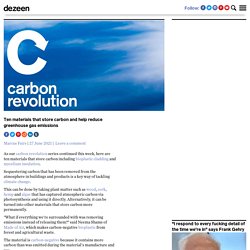 Sequestering carbon that has been removed from the atmosphere in buildings and products is a key way of tackling climate change. This can be done by taking plant matter such as wood, cork, hemp and algae that has captured atmospheric carbon via photosynthesis and using it directly. Alternatively, it can be turned into other materials that store carbon more permanently. "One tonne of olivine sand can take in up to one tonne of CO2" Home Duct Sealing Made Easy — by Aeroseal® Duct Sealing. G2 Venture Partners. Holy Grail. Projects selected for Phase 1 of the Direct air capture and greenhouse gas removal programme. Led by the University of Exeter together with the Plymouth Marine Laboratory, Brunel University London and TP Group. 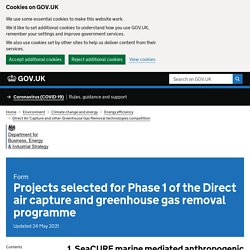 Direct removal of carbon dioxide (CO2) from air is hampered by its very low concentration. The concentration of CO2 in seawater is however approximately 150 times higher. SeaCURE technology will process seawater to temporarily make it more acidic, which helps to get the carbon dioxide to ‘bubble out’. We turn CO2 into stone. How direct air capture works (and why it's important) In January 2021, eight shipping container-sized boxes were assembled in Hellisheiði, Iceland, next to the third-largest geothermal power station in the world.

Twelve giant fans mounted on the outside of each box will start spinning later this year. The facility, called Orca, is intended to suck approximately 4,000 tons of carbon dioxide directly from the air each year. Developed by the Swiss engineering firm Climeworks, Orca is the largest example of direct air capture to date — a technology intended to suck carbon dioxide out of thin air. Here are some climate engineering schemes that can act as 'Plan B' for Earth, World News. Dismissed a decade ago as far-fetched and dangerous, schemes to tame the effects of global warming by engineering the climate have migrated from the margins of policy debates towards centre stage. "Plan A" refers to solving the problem at its source. But the UN's top climate science body has made it clear that slashing carbon pollution won't be enough to keep Earth from overheating.

Direct Air Capture of CO2. Charm Industrial. Climeworks offers a technology to reverse climate change. Newlight Technologies, Inc. A fresh Breath of Air. Ocean-based Climate Solutions, Inc. The Key Technologies for Winning the Fight Against Climate Change, According to IDTechEx. BOSTON, April 21, 2021 /PRNewswire/ -- Each year, April 22nd marks Earth Day, a worldwide event that aims to diversify, educate and activate the environmental movement. Since the first Earth Day in 1970, activists across the world have used the occasion to push for an increased awareness over environmental issues and lobby for policy changes. The theme of this year's Earth Day is "Restore Our Earth", with the event focusing on natural processes, emerging green technologies and innovative thinking that can restore the world's ecosystems. The climax of the event, the Earth Day Live digital event, will coincide with the Biden Administration's global climate summit, where world leaders will meet to discuss the need to take stronger action on climate change ahead of the United Nations Climate Change Conference this November in Glasgow.