Logistics companies fear the return of hard borders. DURING the day, Leipzig’s airport is quiet. 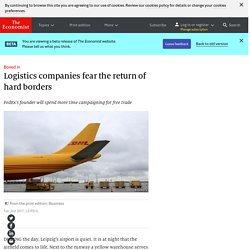 It is at night that the airfield comes to life. Next to the runway a yellow warehouse serves as the global sorting hub for DHL, a delivery firm owned by Deutsche Post of Germany. The Observatory of Economic Complexity. The globe of economic complexity. Trade Data Visualization. A Fresh Look a Cuban Trade - esri story map. United Nations Office for South-South Cooperation - What is SSC? South-South cooperation is a broad framework for collaboration among countries of the South in the political, economic, social, cultural, environmental and technical domains. 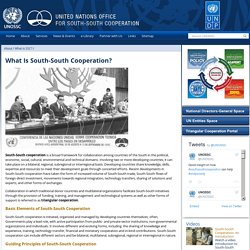 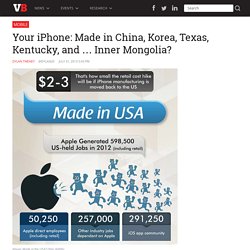 And then there’s the software on top of that. As we know, Apple relies on manufacturers in China, such as Foxconn and Pegatron, to assemble its iPhones. This is how China's New Silk Road initiative could impact European trade. Much has been written about the Belt and Road initiative since Xi Jinping made it Beijing’s flagship initiative in September 2013. 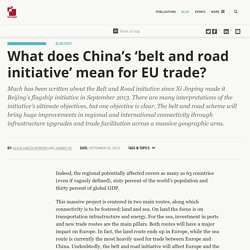 There are many interpretations of the initiative’s ultimate objectives, but one objective is clear. The belt and road scheme will bring huge improvements in regional and international connectivity through infrastructure upgrades and trade facilitation across a massive geographic area. Indeed, the regional potentially affected covers as many as 63 countries (even if vaguely defined), sixty percent of the world’s population and thirty percent of global GDP. This massive project is centered in two main routes, along which connectivity is to be fostered: land and sea. On land the focus is on transportation infrastructure and energy. America, China and the risk of a trade war. What now for global trade? 8 things we learned from Davos 2017.

It’s been an eventful 12 months for global trade. 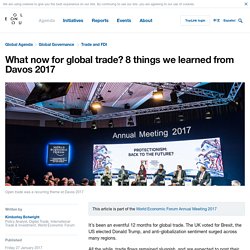 The UK voted for Brexit, the US elected Donald Trump, and anti-globalization sentiment surged across many regions. All the while, trade flows remained sluggish, and are expected to post their worst annual innings since the financial crisis. TPP vs RCEP? Trade deals explained. Trump campaigned against TPP, warning that it would cost US jobs and comparing it to the North American Free Trade Agreement (NAFTA) signed by President Bill Clinton. 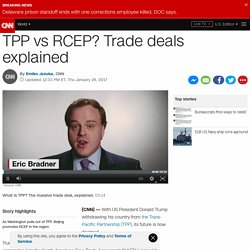 His decision may also leave the door open for China to expand its economic might across Asia and the Pacific with its own trade deal, the Regional Comprehensive Economic Partnership (RCEP). As originally drafted, the Trans-Pacific Partnership was a colossal, multinational trade agreement encompassing 12 countries, who together account for 40% of global GDP and 20% of global trade.

By eliminating some 18,000 tariffs and expanding market access across the Pacific region, the deal's supporters said, it would create major US export and job opportunities. If the TPP were approved, according to US think tank Brookings Institution, the US would have stood to gain $77 billion annually, while Japan would have clinched an even larger $105 billion.

The RCEP countries make up 46% of the global population and are worth 24% of global GDP. Is Donald Trump against free trade? The US president, Donald Trump, has been in office for less than a week, but he is already working towards fulfilling his campaign promises. 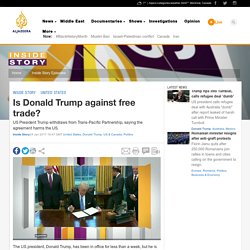 He has signed several executive orders in his first few days into the job. Many of them undoing laws and deals that were put in place by former President Barack Obama. On Monday, Trump signed an executive order withdrawing the United States from the Trans-Pacific Partnership, which is a trade deal the Obama administration had worked on for several years. It calls for lower taxes on trade between member countries. The Economist explains: How Trump could take America out of NAFTA. DONALD TRUMP has consistently slammed the North American Free-Trade Agreement (NAFTA). 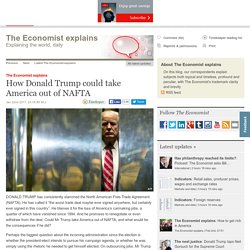 He has called it “the worst trade deal maybe ever signed anywhere, but certainly ever signed in this country”. He blames it for the loss of America’s carmaking jobs, a quarter of which have vanished since 1994. Will the new 'Silk Road' be a success? On Wednesday, a freight train arrived in Britain after an 18-day, 12,000km journey from China's Zhejiang province. 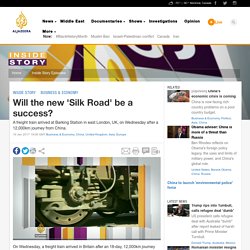 Its backers hope it will be the first of many, heralding a modern-day revival of the fabled Silk Road trade route linking Europe and Asia. The "East Wind" train line carried products worth nearly $5m on its maiden journey to Europe, including clothes, suitcases, purses and wallets - all loaded on to 34 wagons. On the return journey, it will haul British machinery, Spanish hams and cheeses and German beer. The term "Silk Road" evokes ancient images of merchants travelling in dusty caravans on journeys taking months. The modern rail version offers companies the chance to move goods between the continents for about half the cost of air transportation - and, in two weeks, less travel time than that offered by the quickest sea route.

Green rail? Shipping from China to London. This week, a China Railways freight train left the station in Yiwu, a small near-coastal city in southeast China. 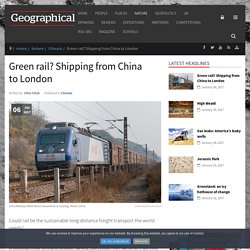 Its final destination: Barking, east London. Over two weeks it will cross through Kazakhstan, Russia and across Europe, and is set to arrive in London on 18 January. In recent years, the so-called new Chinese ‘Silk Road’ has seen increased freight traffic across the Eurasian landmass as Chinese manufacturers seek faster and cheaper ways to transport their products to the European market.

Cities such as Madrid and Duisburg have already seen multiple trains arrive, stocked full of clothes, shoes and other consumer goods. Have we hit 'peak trade'? No, says research. Over the past five years, global trade growth has been stagnant. With protectionist sentiment intensifying across advanced economies and China and other emerging markets (EMs) appearing to pivot away from export-oriented growth strategies that had incentivised the creation of global supply chains in the 2000s, a hypothesis informally known as ‘peak trade’ has become increasingly popular (Economist 2014).

According to this view, the current trade stagnation is not temporary, but instead reflects fundamental changes to the global economy. In the coming decades, these changes will prevent growth in global trade from outpacing growth in global GDP, as it has since World War II. The simple steel box that transformed global trade.

Image copyright Getty Images Perhaps the defining feature of the global economy is precisely that it is global. Toys from China, copper from Chile, T-shirts from Bangladesh, wine from New Zealand, coffee from Ethiopia, and tomatoes from Spain. Like it or not, globalisation is a fundamental feature of the modern economy. In the early 1960s, world trade in merchandise was less than 20% of world economic output, or gross domestic product (GDP). Now, it is around 50% but not everyone is happy about it. The era of trade agreements is over. Should we miss them? CAMBRIDGE – The seven decades since the end of World War II were an era of trade agreements.

The world’s major economies were in a perpetual state of trade negotiations, concluding two major global multilateral deals: the General Agreement on Tariffs and Trade (GATT) and the treaty establishing the World Trade Organization. In addition, more than 500 bilateral and regional trade agreements were signed – the vast majority of them since the WTO replaced the GATT in 1995.

How can Africa kill the red tape and improve trade? “There are so many processes, so much documentation. A centralized place of clearance could solve anything.” These are the words of Sharon Kimanini, head of logistics for a Kenyan garment exporter. Her message is clear. Free trade could benefit the world. But there's one thing stopping it. Trade has a serious image problem, one that was painfully obvious even before the UK’s Brexit vote and surprise outcome of the US presidential elections. “Free trade and globalization have protected hundreds of millions of people from poverty and hunger. The problem is that few people believe this,” said Donald Tusk, European Council president, to The New York Times. That’s why big trade deals like the Trans-Pacific Partnership are enormously unpopular even before their contents become public, or indeed before the terms are fully negotiated. It’s also why, in the words of the Economist, trade pacts are “the walking dead of diplomacy”.

From both a practical and political standpoint, the focus on grand trade bargains is misplaced. China: The world's new champion of free trade? Why China could lead the next phase of globalization. Trump: US to quit TPP trade deal on first day in office. Briefing note: the winners and losers of globalisation. Globalization is worth saving. Here’s how to do it. Watch Nobel Prize-winning economist Joseph Stiglitz explain globalization in three minutes. The Economist explains: Why is world trade growth slowing? World Bank admits some have lost out from free trade. 5 ways to make global trade work for developing countries. More Wealth, More Jobs, but Not for Everyone: What Fuels the Backlash on Trade. WTO - Trade in 2016 to grow at slowest pace since the financial crisis. The Economist explains: Why billions of dollars of goods are stuck at sea. Commodity dependency: A risky state. The problematic proposal.

Scramble in the Horn. This map shows every country’s major export. Thanks to NAFTA, Conditions for Mexican Factory Workers Like Rosa Moreno Are Getting Worse. Resources Futures.