The Observatory of Economic Complexity 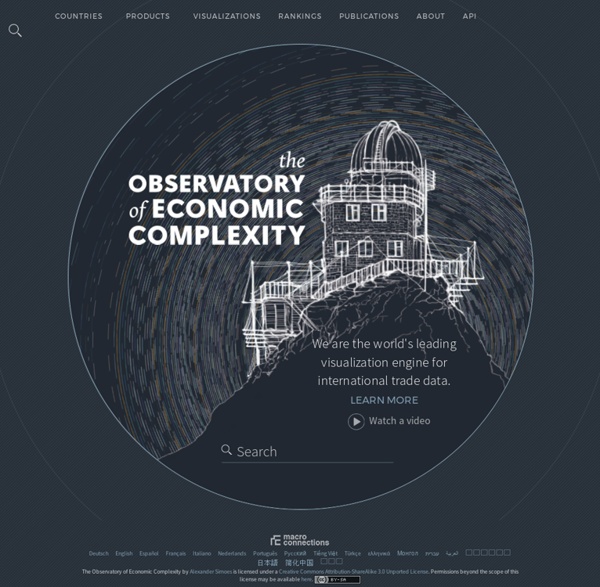 What Amazon Gets Right A recent article in The New York Times ignited a controversial discussion about Amazon, the world's largest online retailer, and its CEO, Jeff Bezos. The article describes Amazon's workplace culture as "bruising," characterized by maladies such as harsh management, towering expectations, gender inequality, excessive hours and annual "purposeful Darwinism" employee firings, to name a few. With some suggesting that the massive organization leaves workers in tears at their desks, Amazon and its leadership practices have come under fire.

Unsuccessful places / Changing places - Regional policy THE political shock of Brexit and of the election of Donald Trump have led to new interest in the problem posed by regional inequality. Both shocks drew support from places to which recent economic trends have not been especially kind, and both were reactions, at least in part, against the economic success enjoyed by elites concentrated in a relatively small number of rich metropolitan areas. Even economists, whose "nihilism...about what we can do to help struggling places in the U.S. is, quite frankly, strange" (in the words of Adam Ozimek) have taken to reconsidering their priors on the issue. Myself included; as I noted recently:

ftshwawaii - MBS - Mt Eliza We can’t predict the future, but it is very possible to anticipate it. As we turn our minds to emerging issues, it is possible to map the future and better understand the world we live in. This is what we mean by futures thinking: giving meaning to the future. Leading international futurists Dr Robert Burke and Dr Sohail Inyatullah, who regularly deliver this program, are taking it global in 2015, beginning with a special five-day event in Honolulu. To give the program a powerful Asia-Pacific focus, they will be joined by renowned futures thinkers and strategists Professor James Dator and John Sweeney from the Hawaii Research Center for Futures Studies. Peer-to-Peer Equity: Crowdcube With the introduction of p2p lending some lenders wrote that the concept enabled everyone to feel as banker. Now, newly launched Crowdcube.com enables any UK resident to feel as venture capitalist for a financial commitment as low as 10 GBP. Investors can browse pitches which usually include business plans and financial projections and sometimes even video pitches. In return for the investment, investors get shares of the company. For example entrepreneur Daniel Vinson wants to raise 50,000 GBP.

Why study classical economic thought? Simon says economists should study the history of economic thought. I'm with him: my masters' dissertation was on Malthus's theory of unemployment. But this poses the question: why bother with the wrong ideas of dead men? One answer is that they weren't always wrong. Marx was right about quite a lot.

The Reputation Economy - Reputation UK It determines the best opportunities to grow your business, whether your bank will lend you money, whether your landlord will accept you as a tenant, which employers will hire you and how much your customers will pay you. In The Reputation Economy, Michael Fertik, CEO of Reputation.com, explains how you or your business can optimize your digital reputation to succeed and prosper in a world where your reputation is as valuable as the cash on your corporate or personal balance sheet. Maximize the value of your real and deserved reputation. #ReputationEconomy “As the founder of Reputation.com, Michael Fertik is already a visionary entrepreneur. With the Reputation Economy, he has crystallized that vision, not only mapping a world where reputation is more important than ever, but giving us the tools to build authentic digital reputations and be the architects of our own digital futures.”

6 things to know about global trade in 2016 If anything encapsulates our complex, uncertain, uncooperative world in 2016, it’s trade. For decades seen as a powerful force for good – enhancing growth, competitiveness and living standards – trade made greater integration within the global economy seem more or less inevitable. But it hasn’t benefited all participants equally, and while hundreds of millions of people have been lifted out of poverty by the global economic growth it engendered, trade has laid waste to entire industries, stripping away livelihoods and hopes and helping give rise to an upsurge in nativism and nationalist politics.

Global Calculator shows how the world can 'prosper' while tackling climate change 28 Jan 2015, 07:20Simon Evans The world's population could live a prosperous, European-style lifestyle by 2050 at the same time as avoiding dangerous climate change, according to a new Global Calculator developed by the UK's Department for Energy and Climate Change (DECC). The online tool shows how global prosperity can increase, even as emissions fall by 60 per cent from current levels in line with climate targets. This feat, according to the calculator, would require a series of massive changes to how we use energy, such as a shift from fossil fuels towards nuclear and renewables, and much wider use of electric heat and transport. DECC's tool shows this transition might be slightly more, or slightly less expensive than the cost of doing nothing to tackle emissions.

Kickstarter Sets Off $7 Million Stampede for a Watch Not Yet Made But he couldn’t even get a foot in the door, let alone secure any money for what he called the Pebble watch. So he turned to Kickstarter, a site where ordinary people back creative projects. Backers could pledge $99 and were promised a Pebble watch in return. Less than two hours after the project went up on the site, Mr. Migicovsky and his partners hit their goal of $100,000. MattAndrews: Institutional reform in development Outcomes as a doorway to better governance indicators Yesterday I did a post on creating outcome measures that could be useful in facilitating focused governance indicators. I focused on child health and suggested that we look at the survival rates of children to see where countries are experiencing good or bad governance.

60+ Free Books on Big Data, Data Science, Data Mining, Machine Learning, Python, R, and more Here is a great collection of eBooks written on the topics of Data Science, Business Analytics, Data Mining, Big Data, Machine Learning, Algorithms, Data Science Tools, and Programming Languages for Data Science. By Brendan Martin, (LearnDataSci). Pulled from the web, here is a great collection of eBooks. While every single book in this list is provided for free, if you find any particularly helpful consider purchasing the printed version.

Tech overtakes oil: the world’s 5 most valuable companies in 2006 and 2016 From smartphones and social media, to virtual reality and artificial intelligence, the tech-oriented world we live in today looks very different to how things were just 10 years ago. In 2006, oil giant Exxon Mobil headed the list of the world’s most valuable companies and Microsoft was the only tech firm near the top. Fast forward to August 2016, and Apple, Google’s Alphabet, Amazon and Facebook dominate the list, while ExxonMobil is the only oil company left in the top five.