Yes, Bernie Sanders Will Become President. Hillary Clinton's FBI Investigation Isn't a 'Nothingburger' Dewey Square Group. The Dewey Square Group (DSG), founded in Boston in 1993, is a public affairs firm with specialties in "grassroots" and "grasstops" campaigns, strategic communications, coalition building, state and local affairs, international practice, and political campaigns.[1] In August 2006, it was bought by the WPP Group,[2] and in 2012, WPP merged DWG into Hill+Knowlton.[3] In 2005, DSG had unaudited revenues of $12.5 million and gross assets of $2.9 million.[2] Because it is a private company, more recent figures are not readily available. 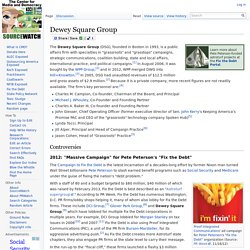 The firm's key personnel are:[4] Charles M. Campion, Co-founder, Chairman of the Board, and PrincipalMichael J. Whouley, Co-Founder and Founding PartnerCharles A. Baker III, Co-founder and Founding PartnerJohn Giesser, Chief Operating Officer (former executive director of Sen. Insurance Lobby That Fought Hillarycare and Obamacare Now Has Sturdy Bridges to Democrats. This story was co-published with The Daily Beast. 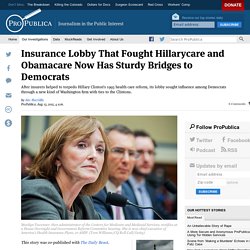 When the former head of the U.S. government’s health insurance programs was hired in July to run a lobby that had spent tens of millions of dollars trying to derail Obamacare, it was more than just another spin of Washington’s revolving door. Marilyn Tavenner, former administrator of the Centers for Medicare and Medicaid Services, became chief executive of America’s Health Insurance Plans, the industry’s main lobbying group, which is known as AHIP. As the latest of a half-dozen prominent architects and overseers of Obamacare to move into the health industry, her move signified growing ties between health insurers and Democrats despite battles over the Affordable Care Act. Hillary Clinton’s Mixed Record on Wall Street Belies Her Tough ‘Cut it Out’ Talk. This story was co-published with The Daily Beast. 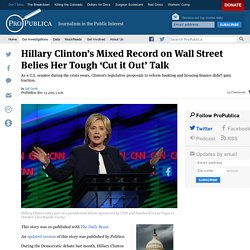 An updated version of this story was published by Politico. During the Democratic debate last month, Hillary Clinton assured viewers she would be a president at least as tough on Wall Street as her main opponent for the nomination, Sen. Hillary Clinton Told Wall Street To ‘Cut It Out’—Not So Much, the Record Shows. Under attack during Saturday night’s Democratic debate over her historical reliance on campaign contributions from Wall Street, Hillary Clinton said she isn’t influenced by such donations and would be at least as tough on the industry as her opponents. 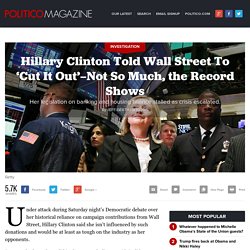 The fact-checker's guide to viral graphics contrasting Hillary Clinton, Bernie Sanders. ​After a New York Times analysis found Bernie Sanders and Hillary Clinton voted in synch 93 percent of the time during their two overlapping Senate years, Sanders’ supporters have been pushing back on the notion that the two leading Democratic presidential candidates are largely the same. 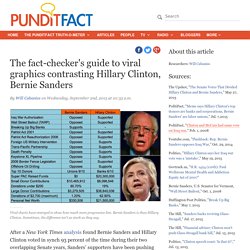 Several readers asked us to look at graphics circulating on Twitter, Facebook and Reddit that attempt to differentiate Sanders and Clinton by highlighting differences in their voting records. We’ve already looked at claims about the two candidates’ donors, which is mentioned in the lower half of this chart in particular. But we wondered if the claims about their voting records and policy positions were correct.

We found that many of the chart’s points are correct, though some either fail to capture Clinton’s flip-flops over the years or over-simplified her stance on issues where her public comments are really thin. Iraq War authorization When President George W. Wall Street bailout (TARP) Death penalty. Hillary Clinton Accused of Revising History on Defense of Marriage Act - Bloomberg Politics. 5 Things You Should Know About Hillary Clinton : It's All Politics. Many Americans have a pre-formed opinion of Hillary Clinton, who is expected to announce her candidacy for president this weekend. 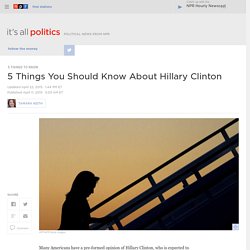 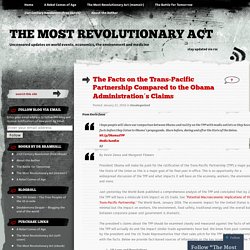 This is an opportunity for a widespread discussion of the TPP and what impacts it will have on the economy, workers, the environment and more.Just yesterday the World Bank published a comprehensive analysis of the TPP and concluded that by 2030 the TPP will have a miniscule 0.4% impact on US trade. Bernie Sanders' Bank Breakup Plan Is Simply Cuckoo. WASHINGTON — During his speech this week on his plan to end "too big to fail," Sen. 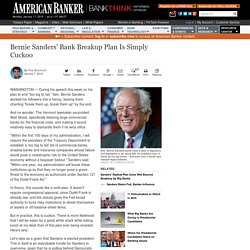 Bernie Sanders worked his followers into a frenzy, leaving them chanting "break them up, break them up" by the end. And no wonder. The Vermont lawmaker excoriated Wall Street, specifically blaming large commercial banks for the financial crisis, and making it sound relatively easy to dismantle them if he wins office. "Within the first 100 days of my administration, I will require the secretary of the Treasury Department to establish a 'too big to fail' list of commercial banks, shadow banks and insurance companies whose failure would pose a catastrophic risk to the United States economy without a taxpayer bailout," Sanders said.