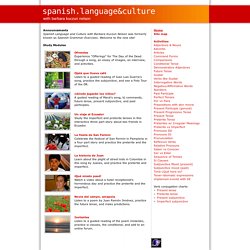 Kiss. Spanish audio & transcripts. Learn words / expressions and practice Spanish pronunciation This is a transcripts page for the free Spanish language audio prepared by the Spanish Language Project Team at the University of California. 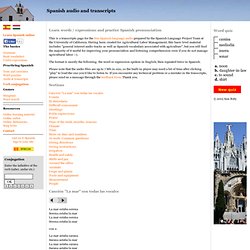 Having been created for Agricultural Labor Management, this basic level material includes "general interest audio tracks as well as Spanish vocabulary associated with agriculture", but you will find the majority of it useful for improving your pronunciation and listening comprehension even if you do not manage agricultural labor :-). The format is mostly the following: the word or expression spoken in English, then repeated twice in Spanish. Please note that the audio files are up to 7 Mb in size, so the built-in player may need a bit of time after clicking "play" to load the one you'd like to listen to. 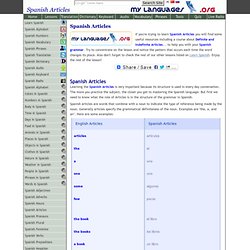 The more you practice the subject, the closer you get to mastering the Spanish language. But first we need to know what the role of Articles is in the structure of the grammar in Spanish. Spanish articles are words that combine with a noun to indicate the type of reference being made by the noun. Generally articles specify the grammatical definiteness of the noun. As you can see from the example above, the structure of the Articles in Spanish has a logical pattern. Learn Spanish. Learning spanish in Spain Magazine. Proyecto Sherezade. Inicio - BBC Mundo.

Spanish Teacher. Like A Spaniard… Colloquial Spanish Course. 10 great contemporary Spanish films to watch - Learn Spanish your way - Cactus Language Training. Here we give you our top 10 Spanish films of recent times – but would be interested to hear your suggestions too! 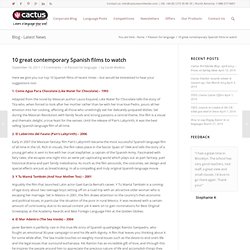 1. Como Agua Para Chocolate (Like Water for Chocolate) – 1993 Adapted from the novel by Mexican author Laura Esquivel, Like Water for Chocolate tells the story of Tita who, when forced to look after her mother rather than be with her true love Pedro, pours all her emotion into her cooking, affecting all those who unwittingly eat her delicately-prepared dishes. Set during the Mexican Revolution with family feuds and strong passions a central theme, this film is a visual and thematic delight, a true feast for the senses. Until the release of Pan’s Labyrinth, it was the best selling Spanish-language film of all time. 2. Early in 2007 the Mexican fantasy film Pan’s Labyrinth became the most successful Spanish-language film of all time in the US. 3. 4. 5. 6. Even knowing what this film was about before I saw it, Maria Full of Grace shocked me as I’m sure it well intended to. 7. 8.

Colloquial spanish. Every language has a short list (a few dozen or so) of standard “answers” or “responses” to indicate commonly expressed sentiments (e.g yes, no, maybe, I don’t know, good luck, etc.) and knowing these and being able to whip the correct one out immediately and automatically in response to someone goes a long way towards sounding like a native and making people feel comfortable speaking to you, and Spanish is no different. 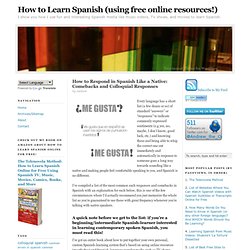 I’ve compiled a list of the most common such responses and comebacks in Spanish with an explanation for each below, this is one of the few circumstances where I’d actually recommend you just memorize the whole list as you’re guaranteed to use these with great frequency whenever you’re talking with native speakers. A quick note before we get to the list: if you’re a beginning/intermediate Spanish-learner interested in learning contemporary spoken Spanish, you must read this! Es Un Decir “Quiero hacer amor con tu madre, ¿está bien?” “¡¿Qué?!” ¿No Qué No? “¿No qué no, eh?

Spanish Slang - All The Colloquialisms You Need To Understand Everyday Spanish. Colloquial, Everyday Spanish Expressions Scroll down for a list of common Spanish slang.Slang is a collective term for informal expressions that are characteristically quite colorful in nature. 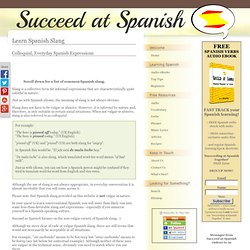 Just as with Spanish idioms, the meaning of slang is not always obvious. Slang does not have to be vulgar or abusive. However, it is informal by nature and, therefore, is only suitable in certain social situations. When not vulgar or abusive, slang is also referred to as colloquial. The Language Dojo. Notes in Spanish - Learn Spanish with Podcast Audio Conversation from Spain. Audio Player [Download MP3] After a pretty busy month Ben and Marina talk about ways to relax! 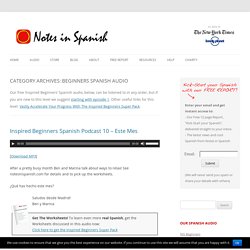