Art Tatum - Tea for Two (Audio+Sheet Music) "A Nice Cup of Tea" from "Home & Beauty" Sung by Gracie Fields Rex 9114. How to Brew A Really Good Cup of Tea: Traditional Japanese Ceremony. The Guide to Brewing Tea. The 8 Types Of Tea. Chinalife Tea House. Theanine. Theanine /ˈθiːəniːn/, also known as L-γ-glutamylethylamide and N5-ethyl-L-glutamine, is an amino acid analogue of the proteinogenic amino acids L-glutamate and L-glutamine and is found primarily in particular plant and fungal species. 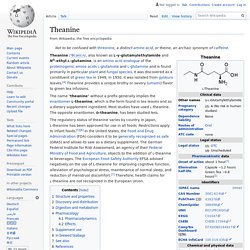 It was discovered as a constituent of green tea in 1949 and in 1950 was isolated from gyokuro leaves, which have high theanine content.[4] Appearance of the name "theanine" without a prefix is understood to imply the L-enantiomer, which is the form found in fresh teas and in some, but not all dietary supplements. The opposite D-enantiomer has far less studied pharmacologic properties, but is present in racemic chemical preparations, and substantially in some studied theanine supplements. 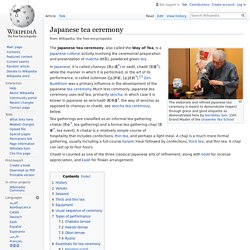 The Japanese tea ceremony, also called the Way of Tea, is a Japanese cultural activity involving the ceremonial preparation and presentation of matcha (抹茶), powdered green tea. In Japanese, it is called chanoyu (茶の湯?) Tea in the United Kingdom. Since the 18th century the United Kingdom has been one of the world's greatest tea consumers per capita, with an average per capita tea supply of 1.9 kg (4.18 Ibs) per year.[1] The popularity of tea occasioned the furtive export of slips, a small shoot for planting or twig for grafting to tea plants, from China to British India and its commercial culture there, beginning in 1840; British interests controlled tea production in the subcontinent. 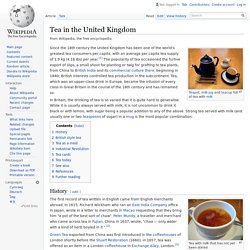 Tea, which was an upper-class drink in Europe, became the infusion of every class in Great Britain in the course of the 18th century and has remained so. In Britain, the drinking of tea is so varied that it is quite hard to generalise. While it is usually always served with milk, it is not uncommon to drink it black or with lemon, with sugar being a popular addition to any of the above. Strong tea served with milk (and usually one or two teaspoons of sugar) in a mug is the most popular combination. Tea house. "Teahouse" redirects here. 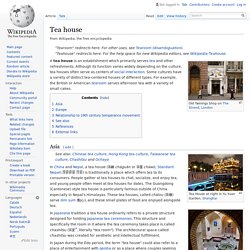