Aspartame now being marketed as natural sweetener, name changed to 'AminoSweet' Studies on radiation from smart meters show that electromagnetic frequencies disrupt and damage the nervous system. Almost no children in France are medicated for ADHD: This is how they define & treat it - ORGANIC AND HEALTHY. Media Blackout as White House Issues Executive Order Giving Broad Powers to ‘Global Health Security Agenda’ for Infectious Disease Threats. While the eyes of the world are focused intently on the 2016 presidential election, the White House has made a dramatic, potentially game-changing move that has once again almost completely eluded the mainstream media — leading many to wonder what they may be hiding. 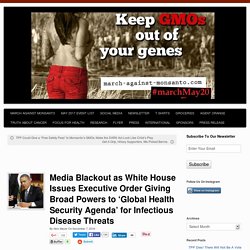 The US Healthcare System Summed Up In 1 Stunning Bill. The Nuremberg Code. CIRP Introduction The judgment by the war crimes tribunal at Nuremberg laid down 10 standards to which physicians must conform when carrying out experiments on human subjects in a new code that is now accepted worldwide. 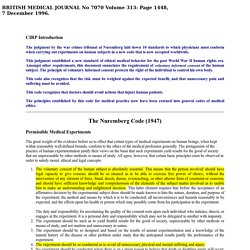 This judgment established a new standard of ethical medical behavior for the post World War II human rights era. Amongst other requirements, this document enunciates the requirement of voluntary informed consent of the human subject. WHO cancer agency under fire for withholding ‘carcinogenic glyphosate’ documents. The International Agency for Research on Cancer (IARC), facing criticism over its classification of carcinogens, has reportedly been advising its scientific experts not to publish internal research data on its 2015 report on “probably carcinogenic” glyphosate. 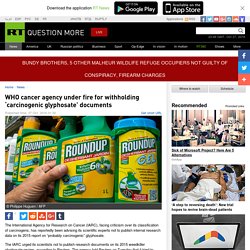 The IARC urged its scientists not to publish research documents on its 2015 weedkiller glyphosate review, according to Reuters. The agency told Reuters on Tuesday that it tried to protect the study from “external interference,” as well as protect its intellectual rights, since it was “the sole owner of such materials.” The scientists had been asked earlier to release all the documentation on the 2015 report under US freedom of information laws. The groundbreaking review, published in March 2015 by the IARC – a semi-autonomous agency of the World Health Organization (WHO) – labeled the glyphosate herbicide as “probably carcinogenic to humans.”

Read more. TPP Raises Risk of Seafood Laden With Chemicals, Antibiotics Flooding US. Business Get short URL WASHINGTON (Sputnik) — The TPP is expected to increase imports from nations that routinely use antibiotics and chemicals in fish farming that are illegal in the United States, the report said. 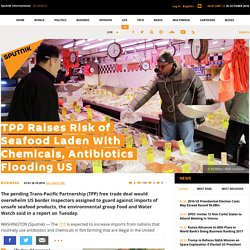 "Today, 94 percent of American seafood is imported, and only 2 percent of imports are examined by trained government safety inspectors," a press release explaining the report said. In 2014, Americans ate 4.6 billion pounds of imported seafood, or 15 pounds per person, the report noted. Why we didn’t vaccinate baby Noor. Enough people have asked, so I’m going to just blog about it and then point people here: I think it’s very important to carefully consider possible harm vs. probably benefits before subjecting your child to something. 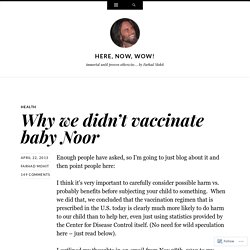 Facebook deletes ‘offensive’ breast awareness video. Vitamin B17 Controversy: Poison or Cancer Treatment? - Dr. Axe. Banned by the FDA in the 1980s but touted by some alternative medicine practitioners as a treatment for cancer, the controversy over the innocently named vitamin B17 rages on. 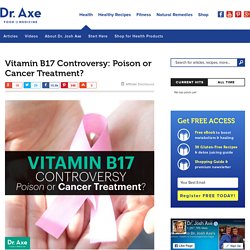 Once labeled and marketed as a vitamin, its appearance practically disappeared without a trace within the mainstream medical community. Today, however, a simple Web search pulls multiple blogs and articles either generously supporting this nutrient as a miracle cure or vilifying it as a hoax. Vitamin B17, also called amygdalin or laetrile, is a glycoside nutrient linked with cancer prevention in alternative medicine practices — and there are anecdotal claims that it’s actually cured cancer.

Vitamin B17 is derived from natural food sources and most abundant in seeds of plants of the prunasin family, such as apricots and apples. Vitamin B17 interacts with other antioxidants — including vitamin A, vitamin C and vitamin E — along with pancreatic enzymes to break down and eliminate harmful cells from the body. 1. Comprehensive New Review of Monsanto’s Glyphosate Underscores Urgent Need for Global Action.

In a “state of the science” review released today, PAN International presents a large body of research documenting the adverse human health and environmental impacts of glyphosate and glyphosate-based herbicides and underscores the need for a global phase-out. 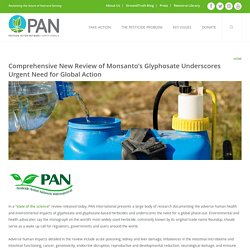 Environmental and health advocates say the monograph on the world’s most widely used herbicide, commonly known by its original trade name Roundup, should serve as a wake up call for regulators, governments and users around the world. Adverse human impacts detailed in the review include acute poisoning, kidney and liver damage, imbalances in the intestinal microbiome and intestinal functioning, cancer, genotoxicity, endocrine disruption, reproductive and developmental reduction, neurological damage, and immune system dysfunction. Aggressive public relations and marketing by glyphosate’s developer, Monsanto, has resulted in the widespread perception that the chemical is ‘safe’. Thousands Of U.S. Deaths From Superbugs Go Unreported » Alex Jones' Infowars: There's a war on for your mind! Superbugs kill tens of thousands of Americans each year, but it’s often not reflected on death certificates. 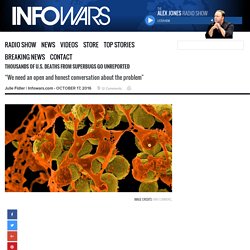 This lack of transparency makes it difficult for health officials to accurately track the spread of antibiotic resistance. [1] Dangerous Legionnaire’s Disease Bacteria Infects Dallas Airport Water Supply. Get short URL The contaminated water supplies are in four American Airlines maintenance hangars, and were discovered after an airport employee reported feeling ill and showing symptoms of the disease. 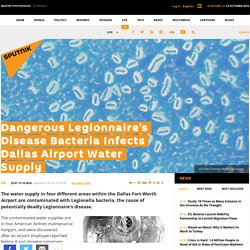 Low-levels of the bacteria were reportedly found in shower heads, sinks, and water fountains. "Nothing is more important than the safety and health of our employees," American Airlines spokesman Matt Miller told NBC Dallas Fort-Worth, which broke the story. Ten Top Technologies That Will Transform The Healthcare Industry.

As healthcare moves to a model of any-time, any-place, continuous and personalized care, it is important to identify the key technologies that will enable this transition and work toward their implementation into different care settings. 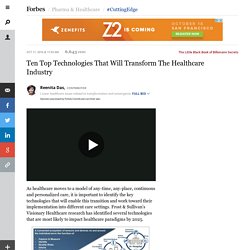 Frost & Sullivan’s Visionary Healthcare research has identified several technologies that are most likely to impact healthcare paradigms by 2025. It is interesting to note that technological advances in the fields of computing, machine learning, nanotechnology and electronics are all playing a role in helping reshape the industry. The figure below provides an overview of the top technologies that will change this industry dramatically, and an analysis of the time frame for their commercialization and maturation. Quantum Computing. Coca-Cola & Pepsi sponsored about 100 health orgs in 5yrs, weakening obesity fight – study.

Coca-Cola and Pepsi aren’t known for their nutritional values, but the two soda giants have managed to promote a positive image for their brands by sponsoring health organizations, making them “unwitting partners” to the cola agenda, a new study claims. That breakdown includes 12 organizations that accepted money from both companies, one which accepted cash from just PepsiCo, and 83 which only accepted funds from Coca-Cola. How Big Pharma Censors the Internet. Government quietly involved behind the scenes Americans pay by far the highest prices in the world for most prescription drugs, and of course big pharma would like to keep it that way. Key measures that the industry relies upon in this regard are the Prescription Drug Marketing Act [PDF] and Ryan Haight Online Pharmacy Consumer Protection Act [PDF], which make it unlawful for most Americans to access lower-priced drugs from overseas, coupled with the powers of U.S.

The growth and spread of antibiotics-resistant bacteria has been revealed by scientists in a timelaspe video showing a 'superbug' fighting against drugs. In a creative stroke inspired by Hollywood wizardry, scientists have designed a simple way to observe how bacteria move as they become impervious to drugs. Study shows how prolonged exposure to radiation steadily destroys sperm. Leprosy hits California: Primary school kids ‘struck down with Biblical flesh-rotting skin disease’ The Aftermath: 100s of 1000s Suffer Health Issues Stemming From 9/11 Attacks.

Get short URL The 2001 tragedy still affects the health of thousands of people in the US, including through many instances of cancer and mental illness. According to Newsweek, some 5,500 of the 75,000 people enrolled in the World Trade Center Health Program have developed cancer, in some cases developing more than one form of cancer concurrently.

Antibacterial soap ingredients unsafe and not effective - FDA — RT America. Ultrasound in 1st trimester of pregnancy linked to autism – study. Having that first ultrasound can be an exciting experience for parents, but it comes with a serious risk, according to a new study: ultrasound exposure in the first trimester is linked to increased severity of autism in children born with the disorder. The study - published in the journal Autism Research and conducted by professionals from the University of Washington's (UW) Medicine school, UW Bothell, and the Seattle Children's Research Institute - examined the variability of symptoms among children with autism. Canadian surgeons urge people to throw out bristle BBQ brushes - Health.

Fed Up. Farmed Salmon — One of the Most Toxic Foods in the World. Chlorine gas leak in W Virginia prompts mass evacuation — RT America. Sexist Cannabis: Marijuana relieves pain for men, not women – study — RT America. Aspartame Is NOT Safe: Here’s How You Have Been Tricked Into Thinking Otherwise AnonHQ. Teens who would never smoke cigarettes now getting taste for vaping – study — RT America. Tourists plunge to their deaths in Peru in separate 'selfie' fatalities.

US sued for complete record of complaints filed against Catholic hospitals — RT America.