A Brazilian man, Ricardo Azevedo from Sao Paulo, has shown off his wonder bike to the world. 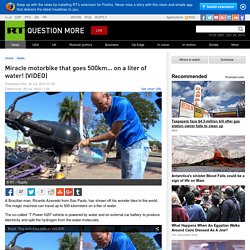 The magic machine can travel up to 500 kilometers on a liter of water. The so-called “T Power H20” vehicle is powered by water and an external car battery to produce electricity and split the hydrogen from the water molecules. As a result, combustion is created giving the motorbike the impetus to move. AnonHQ - Independent & Investigative News AnonHQ. Snowden Archive: Database Of Leaked Docs Available In Canada. TORONTO - Terrorism is "an extraordinarily rare natural disaster" and should not be used as an excuse by government to pass laws that limit our rights and freedoms, former U.S. 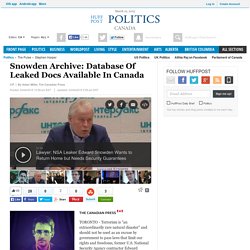 National Security Agency contractor Edward Snowden said Wednesday. Snowden made the comments via video link at the unveiling in Toronto of the Snowden Archive — an online database of hundreds of classified U.S. government documents he leaked to the media in 2013. The archive is a joint project between Canadian Journalists for Free Expression and the Politics of Surveillance Project at the Faculty of Information at the University of Toronto.

It is the first time the leaked documents have been indexed and made fully searchable online. Snowden, who remains exiled in Russia since leaking the classified documents about the NSA's surveillance programs, has often spoken publicly against over-reaching laws passed in many countries in the wake of terrorist attacks.