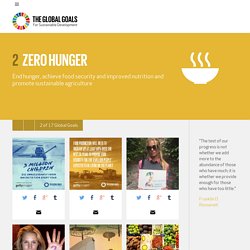 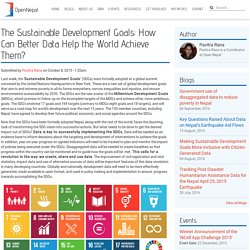 These are a new set of global development goals that aim to end extreme poverty in all its forms everywhere, narrow inequalities and injustice, and ensure environmental sustainability by 2030. The SDGs are the new avatar of the Millennium Development Goals (MDGs), which promise to follow up on the incomplete targets of the MDGs and achieve other, more ambitious, goals. The SDG's enshrine 17 goals and 169 targets (contrary to MDGs eight goals and 18 targets), and will serve as a road map for world's development over the next 15 years. 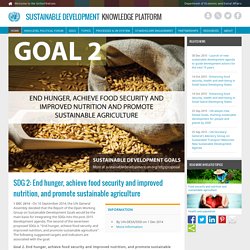 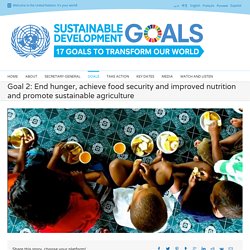 It is time to rethink how we grow, share and consume our food. If done right, agriculture, forestry and fisheries can provide nutritious food for all and generate decent incomes, while supporting people-centred rural development and protecting the environment. Right now, our soils, freshwater, oceans, forests and biodiversity are being rapidly degraded. Climate change is putting even more pressure on the resources we depend on, increasing risks associated with disasters such as droughts and floods. Enhancing the evaluability of Sustainable Development Goal 2 (SDG2): "End hunger, achieve food security and improved nutrition and promote sustainable agriculture" 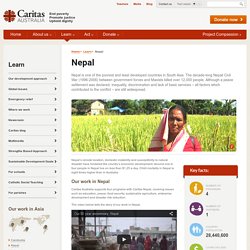 The decade-long Nepali Civil War (1996-2006) between government forces and Maoists killed over 12,000 people. Although a peace settlement was declared, inequality, discrimination and lack of basic services – all factors which contributed to the conflict – are still widespread. Nepal’s remote location, domestic instability and susceptibility to natural disaster have hindered the country’s economic development. Around one in four people in Nepal live on less than $1.25 a day.

MCC has had an active presence in Nepal since the 1950s. We have eight local partners and work on projects including agriculture, nutrition, education, health and peacebuilding. We will be supporting some of these same partners with our earthquake response. In Nepal and elsewhere, MCC and its partners work alongside farmers to address deeper challenges to growing and having enough food — whether that’s a lack of land or resources to put new techniques into place.

They help communities see what more they can do together than alone and meet the challenges of malnutrition with local, affordable solutions. In Bhatigachha, pictured above, many farmers work for daily wages or under sharecropping systems, buying seeds and providing labour, then paying landowners as much as half the proceeds from the harvest. In many projects, local farmers are chosen to test new techniques and share them with friends and neighbours. UN Digital Repository in Nepal: View Document. Nepal pledges to end hunger by 2025 – Chefs for Development. Sustainable Development Goals (SDGs) The new year ushers in the official launch of the bold and transformative 2030 Agenda for Sustainable Development adopted by world leaders last September at the United Nations. The new Agenda calls on countries to begin efforts to achieve 17 Sustainable Development Goals (SDGs) over the next 15 years. “The seventeen Sustainable Development Goals are our shared vision of humanity and a social contract between the world’s leaders and the people,” said UN Secretary-General Ban Ki-moon. 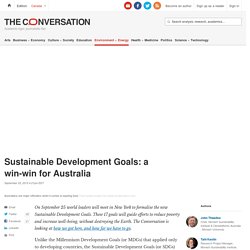 These 17 goals will guide efforts to reduce poverty and increase well-being, without destroying the Earth. The Conversation is looking at how we got here, and how far we have to go. Unlike the Millennium Development Goals (or MDGs) that applied only to developing countries, the Sustainable Development Goals (or SDGs) will apply to all countries, including Australia. The new goals will have a key goal of eradicating extreme poverty, but they also have a much wider agenda. Food Security. Food insecurity in Australia: What is it, who experiences it and how can child and family services support families experiencing it? This practice sheet explores food insecurity in Australia with a focus on identifying those most likely to suffer it as well as considering its impacts. 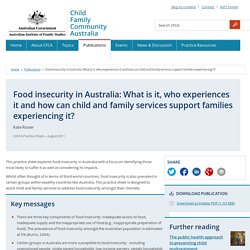 Whilst often thought of in terms of third world countries, food insecurity is also prevalent in certain groups within wealthy countries like Australia. This practice sheet is designed to assist child and family services to address food insecurity amongst their clientele. Key messages There are three key components of food insecurity: inadequate access to food, inadequate supply and the inappropriate use of food (e.g., inappropriate preperation of food). What is food insecurity? Whereas food security is broadly defined as "access by all people at all times to enough food for an active, healthy life" (Radimer, 2002), food insecurity exists "whenever the availability of nutritionally adequate and safe foods or the ability to acquire acceptable food in socially acceptable ways is limited or uncertain" (Radimer, 2002). Indigenous populations. Soup Vans - St Vincent de Paul Society - Good Works.

Every day and night, in every capital city and many regional centres, Vinnies is nourishing the hungriest and neediest in our community. 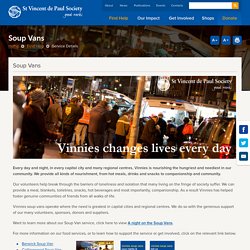 We provide all kinds of nourishment, from hot meals, drinks and snacks to companionship and community. Our volunteers help break through the barriers of loneliness and isolation that many living on the fringe of society suffer. We can provide a meal, blankets, toiletries, snacks, hot beverages and most importantly, companionship. As a result Vinnies has helped foster genuine communities of friends from all walks of life.

Vinnies soup vans operate where the need is greatest in capital cities and regional centres. Want to learn more about our Soup Van service, click here to view A night on the Soup Vans. For more information on our food services, or to learn how to support the service or get involved, click on the relevant link below. For further information email: soupvans@svdp-vic.org.au. Sustainable Development Goals. Caritas is calling for the world to put the poor first and ensure the safe future of the planet by uniting behind the United Nations’ new Sustainable Development Goals which promise to end extreme poverty, tackle inequality and take action on climate change by 2030. 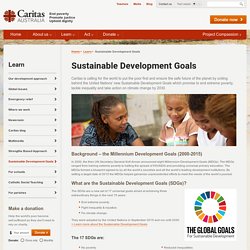 Nepal. Nepal. Npl. Experts Consider What the Response Should Be by Jere R. Behrman, Harold Alderman and John Hoddinott. Jere R Behrman, Harold Alderman and John Hoddinott Introduction: the challenge of hunger and malnutrition Alongside the tragedy of acute famine, frequently shown on our televisions, there is a much bigger problem of chronic hunger and malnutrition in developing countries. Although this carries a very real human cost, it is the purpose of this chapter to look purely at the economic aspects: assuring better nutrition can both reduce the economic drain on poor societies and help them become wealthier by increasing individuals’ productivity.

This summary article reviews the nature and scale of the problem and the economic benefits which would flow from successful solutions. Four opportunity areas for effective use of resources to reduce malnutrition are then proposed: 1. Using resources to address these opportunities would yield benefits greater than the costs, so these opportunities are economically justified. The Federal Democratic Republic of Nepal. Emergency operations The World Food Programme’s (WFP) Nepal earthquake response helps people affected by both earthquakes that struck the country in April and May 2015, by delivering emergency food assistance and organising logistics.

Some of the response contributes to the country’s long-term recovery. More information can be found on the Nepal earthquake emergency page. The Himalayan country of Nepal is one of the world’s poorest and ranks 145th of 188 countries in the 2015 UNDP human development index. Although civil conflict ended in 2006, political turbulence continues and poverty remains a challenge. Status of Food Security in Nepal - MeroReport. Most people are familiar with the terms "national security" or "home security," but relatively few are familiar with the term "food security. " These terms convey a sense of an absence of or lowered risk; a home is less likely to be burglarized, a nation's state secrets are less likely to fall into the hands of unfriendly nations. Food Insecurity and Conflict in Nepal.  The World Bank. Feed the Future. Nepal - A Report on the Food Security Impact of the 2015 Earthquake, May 2015.

Top Facts About Hunger In Nepal. The Facts - Foodbank. Are there really hungry people in Australia? Yes there are. Hunger is a hidden crisis in Australia, with over 2 million people seeking food relief at some point every year, half of which are children. In fact, the demand for food relief is rising, irrespective of national economic growth. It is also a common misconception that only homeless people require food relief. Action Against Hunger. After a decade of unstable governments and armed conflicts, law and order are still tenuous at best in Nepal, where a culture of impunity persists. This South Asian nation of some 30 million inhabitants is beset with a range of development and humanitarian challenges, from endemic poverty to widespread undernutrition, and ranks 145 out of 187 countries in the U.N.’s 2014 Human Development Index. Goal 2: Zero Hunger.