Ask Ethan: Is Spacetime Really A Fabric? Gravity might have been the first fundamental force ever discovered, but in many ways, it remains the least-well understood. 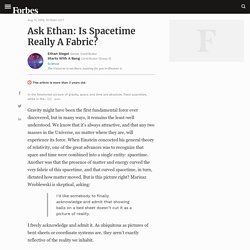 We know that it's always attractive, and that any two masses in the Universe, no matter where they are, will experience its force. When Einstein concocted his general theory of relativity, one of the great advances was to recognize that space and time were combined into a single entity: spacetime. Another was that the presence of matter and energy curved the very fabric of this spacetime, and that curved spacetime, in turn, dictated how matter moved. But is this picture right? Mariusz Wroblewski is skeptical, asking: I'd like somebody to finally acknowledge and admit that showing balls on a bed sheet doesn't cut it as a picture of reality. I freely acknowledge and admit it. T. If you've ever seen a picture of a bent, two-dimensional grid with masses on it representing space, you'll know this type of illustration is extremely common.

ReunMedia / Storyblocks. Sun to Earth distances to scale, at LIGHT SPEED! Earth and Moon Size and Distance scale - with real-time light speed! Earth-Moon-Mars distances to scale, at LIGHT SPEED! Neil deGrasse Tyson Explores Quantum Entanglement with Janna Levin. Physics suggests that the future has already happened. The biggest questions about life, the Universe and everything - and how to answer them. 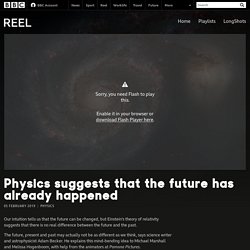 The future may be set in stoneOur intuition tells us that the future can be changed, but Einstein's theory of relativity suggests otherwise.Now Playing Einstein's big idea made simpleEinstein’s theory of general relativity is famously weird and complicated, so we’ve explained it.Watch now ScienceDo you have many doppelgangers?

Why there could be many identical copies of you.Watch now PhysicsWhat is the smallest particle? What is the smallest particle of matter? Watch now PhysicsWhat happens inside a black hole? You might think you would get crushed, but in fact something much more peculiar happens.Watch now PhysicsWe have found 'Earth-like' planetsWe have found plenty of apparently "Earth-like" worlds beyond our solar system.Watch now PhysicsDoes our Universe have a twin? PhysicsCan we trust what science tells us? General Relativity & Mathematical Reality. Mathematics of the Sine Wave. On The Mathematics of the Sine Wave y(x) = A*(2πft + ø) Why the understanding the sine wave is important for computer musicians The sine wave is mathematically a very simple curve and a very simple graph, and thus is computationally easy to generate using any form of computing, from the era of punch cards to the current era of microprocessors. 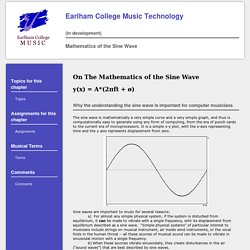 It is a simple x-y plot, with the x-axis representing time and the y axis represents displacement from zero. Sine waves are important to music for several reasons: a) For almost any simple physical system, if the system is disturbed from equilibrium, it can be made to vibrate with a single frequency, with its displacement from equilibrium described as a sine wave. Emma Haruka Iwao smashes pi world record with Google help.

Image copyright Google The value of the number pi has been calculated to a new world record length of 31 trillion digits, far past the previous record of 22 trillion. 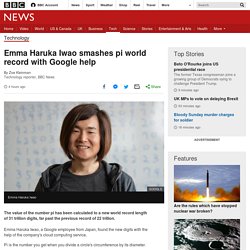 Emma Haruka Iwao, a Google employee from Japan, found the new digits with the help of the company's cloud computing service. Pi is the number you get when you divide a circle's circumference by its diameter. The first digits, 3.14, are well known but the number is infinitely long. Extending the known sequence of digits in pi is very difficult because the number follows no set pattern. Pi is used in engineering, physics, supercomputing and space exploration - because its value can be used in calculations for waves, circles and cylinders. The pursuit of longer versions of pi is a long-standing pastime among mathematicians. The calculation required 170TB of data (for comparison, 200,000 music tracks take up 1TB) and took 25 virtual machines 121 days to complete. Image copyright Getty Images But she still hopes to expand on her work.

How quantum sensing is changing the way we see the world. Image copyright Glasgow University Imagine a world where you can find out exactly what lies under your feet, get advanced warning of volcanic eruptions, look around corners or into rooms, and detect initial signs of multiple sclerosis. 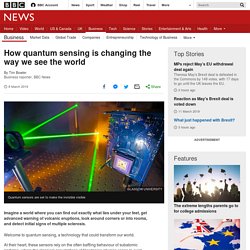 Welcome to quantum sensing, a technology that could transform our world. At their heart, these sensors rely on the often baffling behaviour of subatomic particles, where the classical assumptions of Newtonian physics cease to exist. "Quantum physics is said to be 'spooky', with particles being in two places at once, but it might be less spooky if you think of them as waves - and waves can be in several places at once," says Prof Kai Bongs of Birmingham University. Prof Bongs' Birmingham team is part of a consortium of academics and businesses developing quantum gravity sensors or gravimeters that will be twice as sensitive and 10 times as fast as current equipment. Image copyright Birmingham University "But the new sensor will be able to see most of them. "